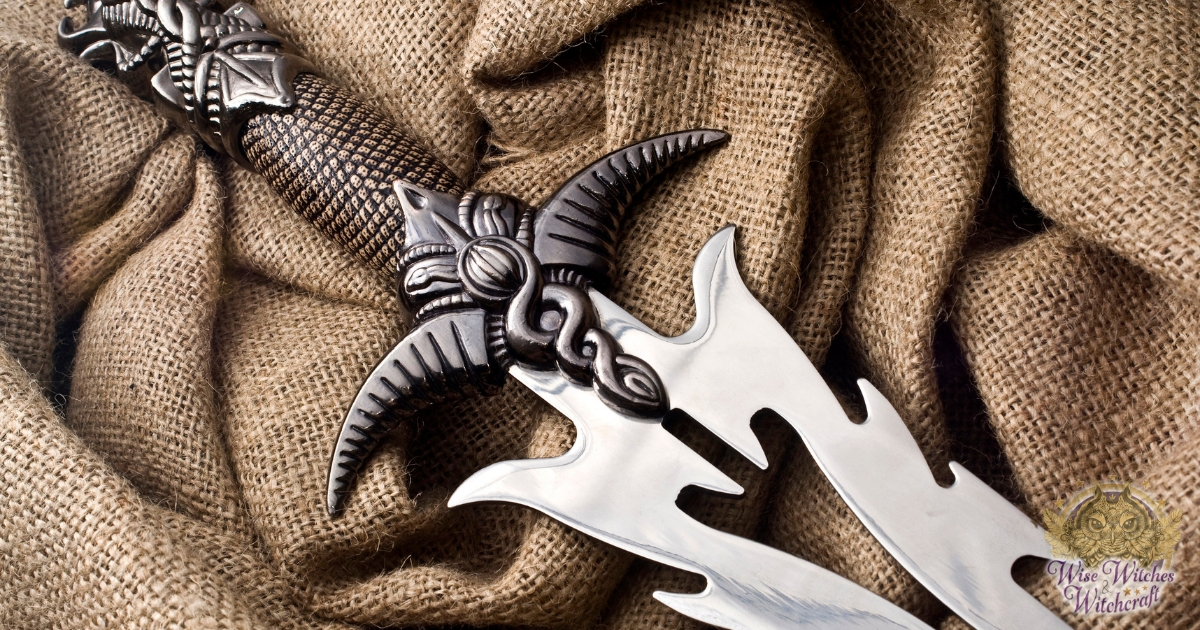 An athame (or athamé) is a black-handled ceremonial double-edged dagger, one of several magical tools used in traditional witchcraft and other Neopagan religions such as Wicca.

The athame frequently has a steel double-edged blade with a sharp point (although the point may be dulled so as to prevent unintended physical harm during ritual use), and a handle which is often black and which may be inscribed with particular symbols dictated by the tradition, ranging from astrological glyphs to runes to magical symbols indicative of deities, spirits or the elements. 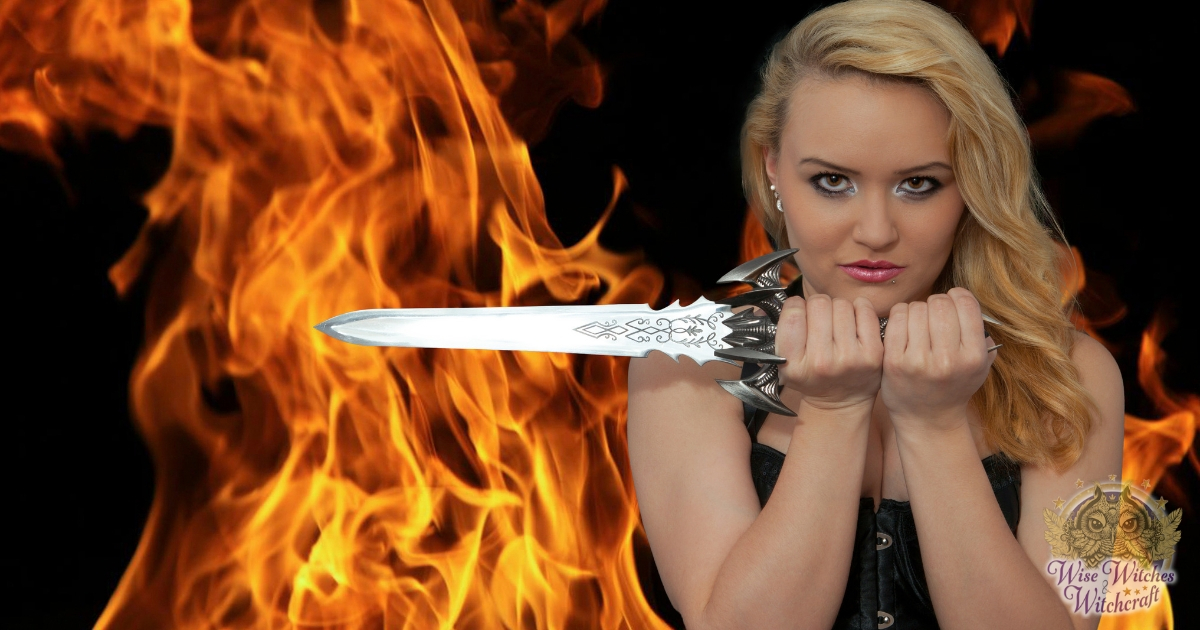 The term “athame” probably derives, via a series of corruptions, from the late Latin “artavus” (a kind of quill knife), which is found in the oldest manuscripts of the medieval grimoire “The Key of Solomon”. A Latin manuscript version of “The Key of Solomon” has a [wisew_rectangle align=”left”]drawing of a knife that looks like a sickle, labelled “artavo”, although the sickle- or crescent-shaped knife is now usually known as the boline.

The athame’s primary use is for ritual and magical purposes only, to direct energy during a ceremony. If things such as herbs or cords need to be actually cut, a boline is normally used. An exception is in the Kitchen Witchcraft philosophy, which actively encourages the use of magical tools for mundane purposes to increase the witch’s familiarity with them. 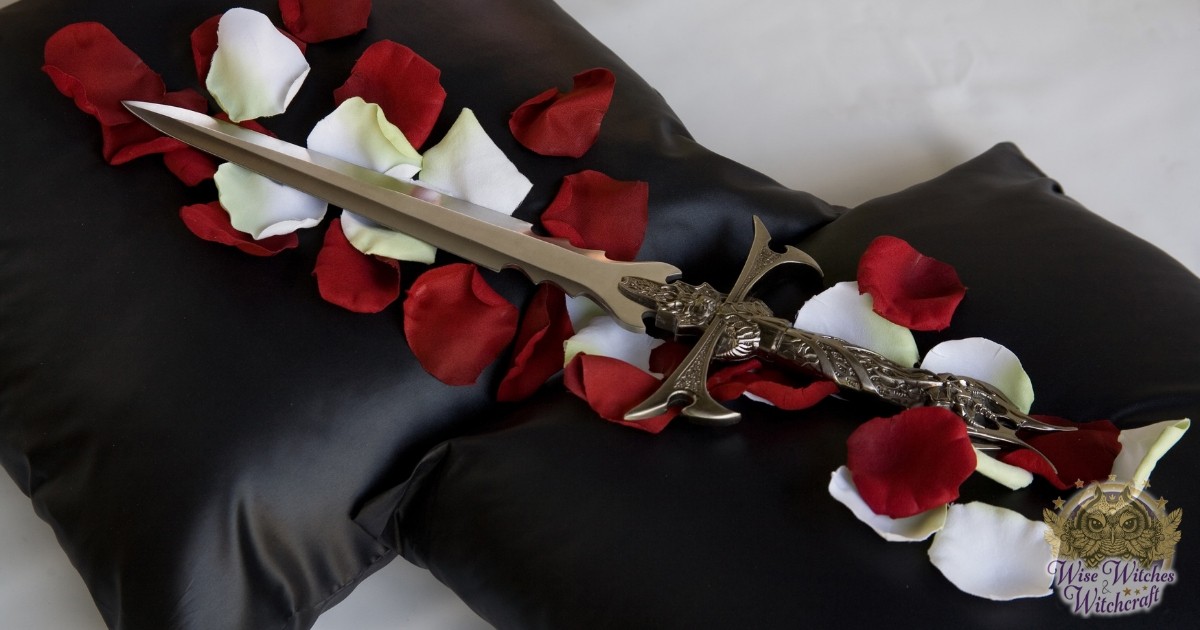 Gerald Gardner, one of the founders of modern Wicca in the 1950s, mentioned the athame in his writings as the most important ritual tool, which had many uses, but which was never used as a mundane knife for actual physical cutting. However, there has been speculation that Gardner‘s interest and expertise in antique swords and knives, and in particular the magical “kris” knives of Malaysia and Indonesia, may have contributed to the tool’s central importance in his vision of Wicca.

The athame is one of the four elemental tools of modern Wicca (along with the pentacle, the wand and the chalice), and represents in most traditions the element of Fire (although in others it represents the element of Air, and the phallic symbolism of the knife links it with the God). It may be used to cast circles by tracing their circumferences, or to cut or re-seal of a “door” in a ritual circle, or to charge and consecrate objects and banish negative energies. As a masculine principle, it is often (for example, in the Wiccan Great Rite) used in combination with the feminine principle of the chalice, evoking the act of procreation and as a symbol of universal creativity. 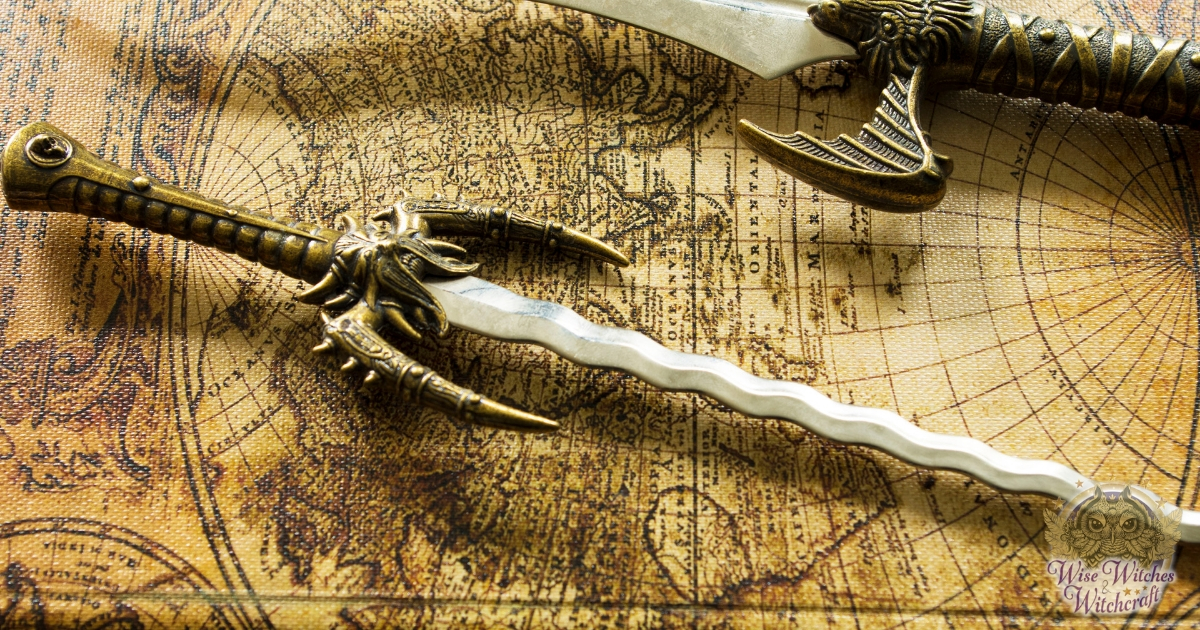 There are rituals of consecration for a newly acquired athame, be it new or acquired from another person. When purchasing a knife for this purpose (or any ritual tool, for that matter) it is considered important never to haggle over the price. Touching another person’s athame without permission is considered an intrusion of the owner’s personal space.