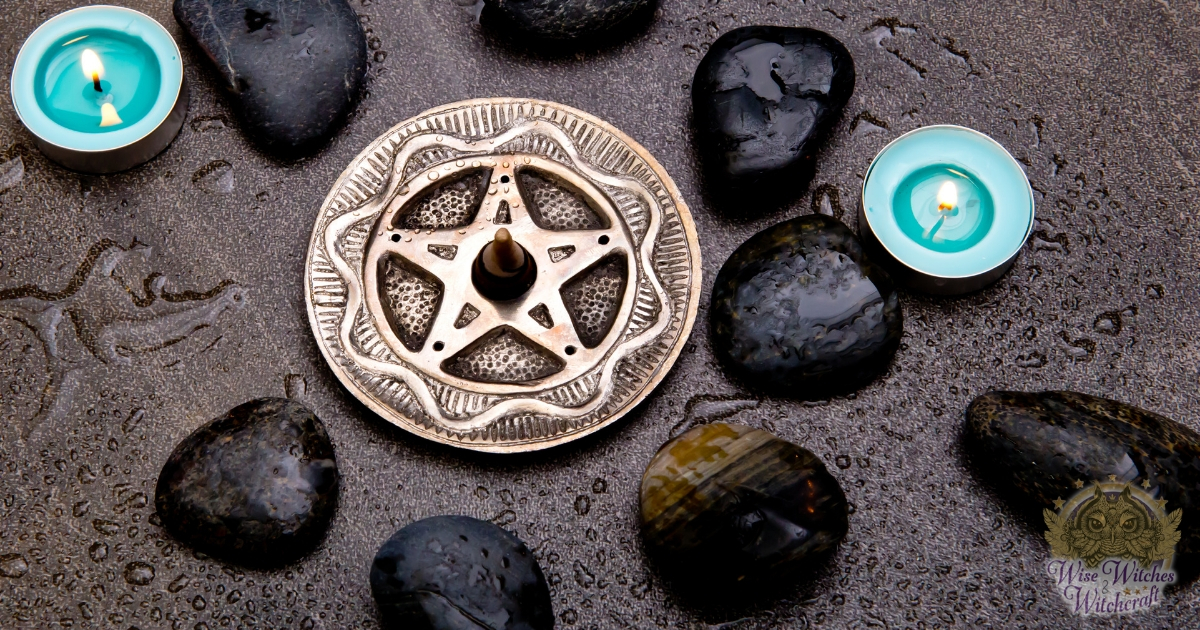 A pentacle is a kind of amulet or talisman used in traditional magical evocations and in some Neopagan magical traditions such as Wicca, alongside other magical tools. It is often confused with the pentagram symbol, which is also widely used within Wicca (see below) and the words are often used (incorrectly) interchangeably. Many different varieties of pentacle can be found in the grimoires of Solomonic magic. 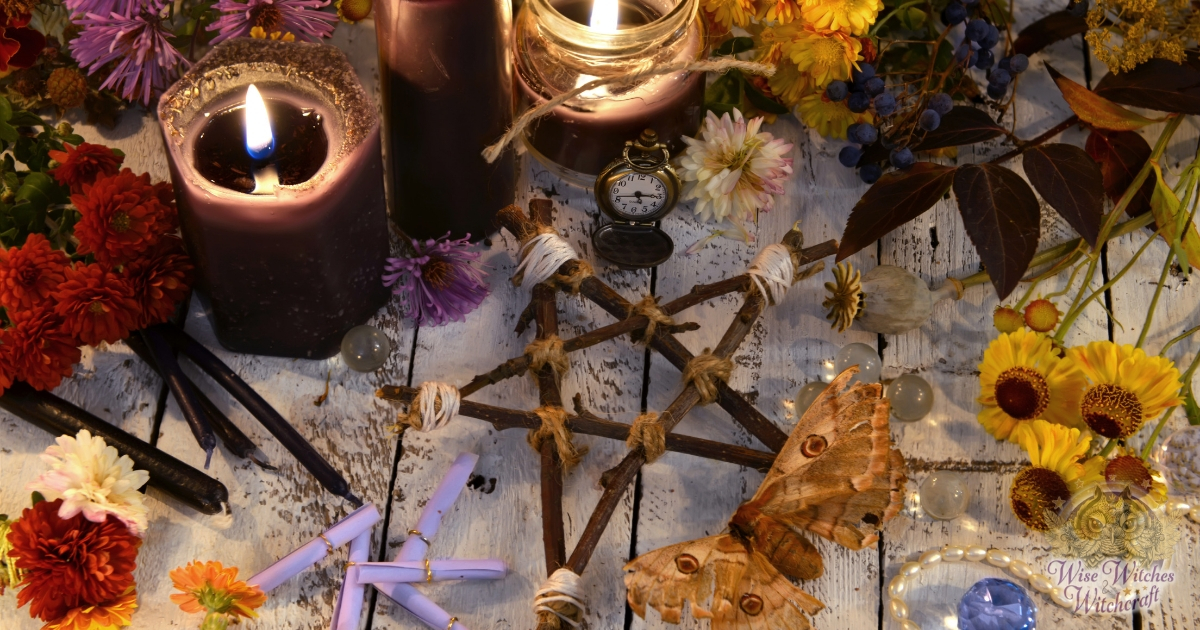 A pentacle is employed as a magical tool within Wicca and other modern forms of witchcraft, generally to summon certain energies or command spirits. It is one of the four elemental tools of witchcraft (along with the chalice, the athame and the wand), and represents the element of Earth. It is normally the centrepiece of the altar on which objects are to be consecrated or charged, and such things as amulets, charms and other tools are placed on it, as may also be the salt and water for blessing. It may also be worn around the neck, or just placed within the “triangle of evocation”.

A pentacle is generally a disc made of parchment, paper or metal (although it can be of other materials such as stone, clay or wood), on which the symbol of a spirit or energy being evoked is drawn. Other protective symbols may also be included (sometimes on the reverse), a common one being the five- or six-point form of the Seal of Solomon, and the pentacle can be decorated and personalized by the individual, according to its required purpose.

Despite the sound of the word, “pentacle” (as opposed to “pentagram” – see below) often had no connotation of “five” in the old magical texts. The word may in fact be derived from the old French word “pentacol” or “pendacol”, a jewel or ornament worn around the neck, from the same root as “pendant”. A pentacle could therefore be any magical talisman inscribed with any symbol or character, and a great variety of shapes and images appear in the old magical grimoires, such as “The Key of Solomon”. When they do incorporate star-shaped figures, these are actually more likely to be hexagrams (six-pointed) than pentagrams (five-pointed). 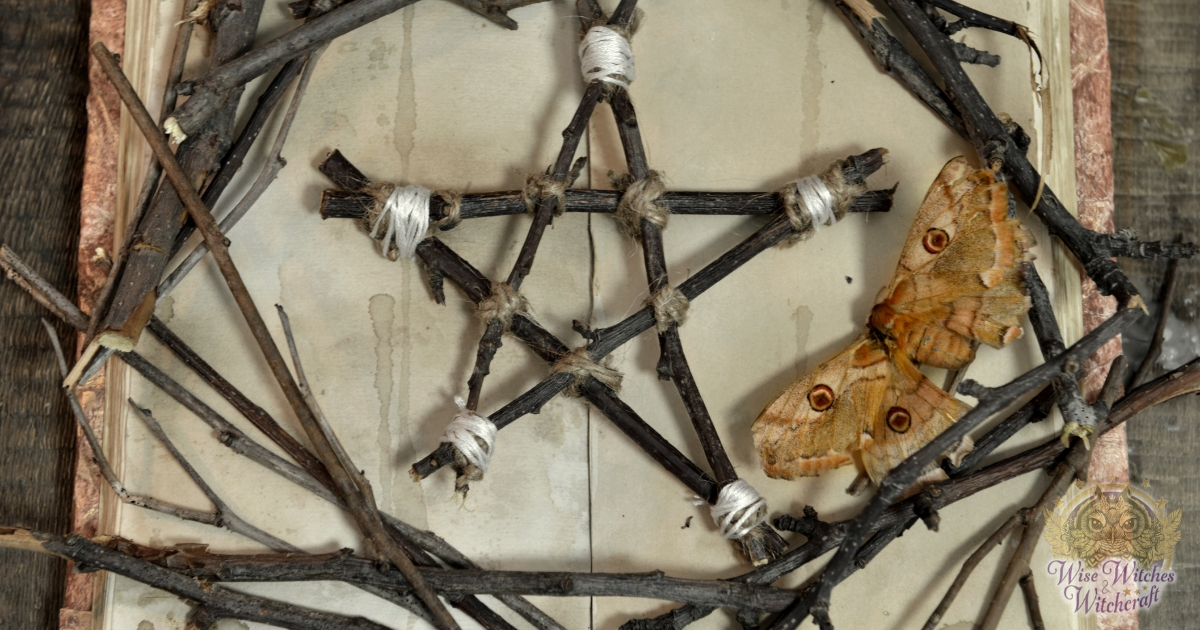 On the other hand, the pentagram (also known as a pentangle), usually inscribed inside a circle, is also used widely today as a symbol of faith by many Wiccans, much as the cross is to Christianity and the six-pointed star to Judaism, and it also has magical associations. Many people who practice Neopagan faiths wear jewelry incorporating the pentagram symbol, the points of which are held to represent earth, air, fire, water and spirit (or, alternatively, love, wisdom, knowledge, law and power). The Wiccan pentagram is drawn “upright” (single point on top), not to be confused with the Satanic, or inverted, pentagram (single point down) as adopted by Anton LaVey and his Church of Satanism.

According to the ancient grimoires, the pentacle is of central importance in the evocation of spirits. A fairly typical evocation involves a series of conjurations of increasing potency, each involving the display of the pentacle. Once the spirit has appeared and been constrained, the pentacle is covered again, but is uncovered whenever demands are made of the spirit or when it is compelled to depart.

In the Hermetic magical system of the Golden Dawn, the “Earth Pentacle” is one of four elemental weapons or tools of an Adept. Other pentacles for the evocation of spirits are also employed in the Golden Dawn system, engraved with the name and sigil of the spirit to be invoked, inside three concentric circles, having painted on their reverse a circle and cross like a Celtic cross. 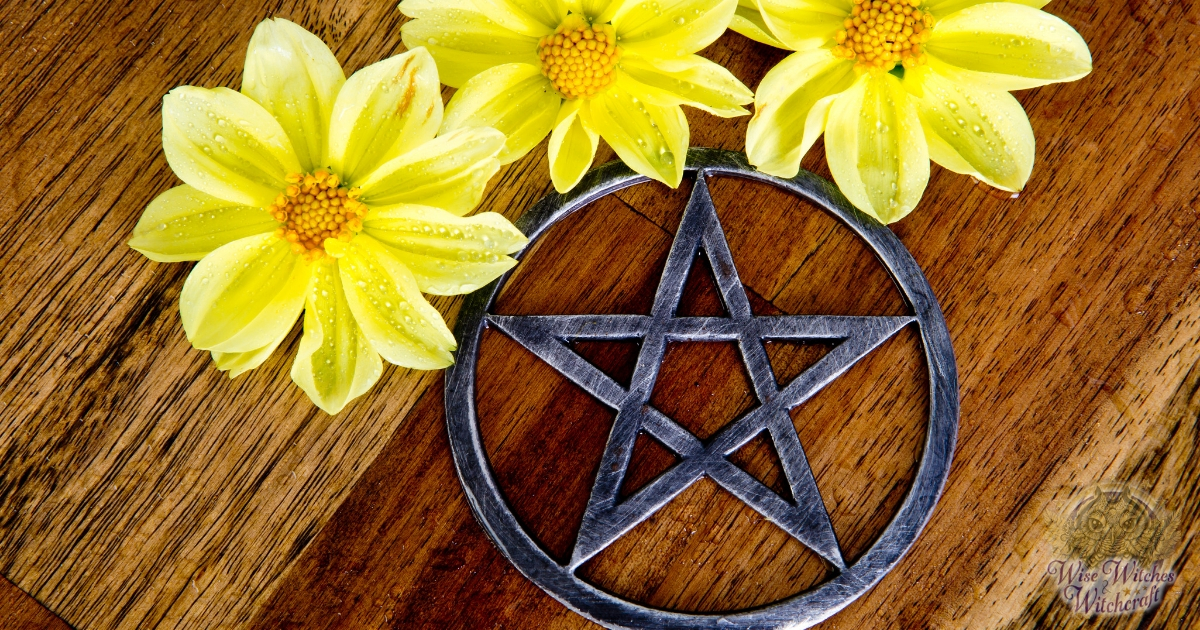 In the Tarot, the minor arcana are divided into four suits (much like conventional playing cards): swords, staves, cups and coins. Following the innovation of Eliphas Lévi in the 19th Century, many writers on Tarot divination now call the coins “pentacles”, and many decks depict them as discs marked with a pentagram. In this context, they represent the element Earth, or divinity manifesting in matter.