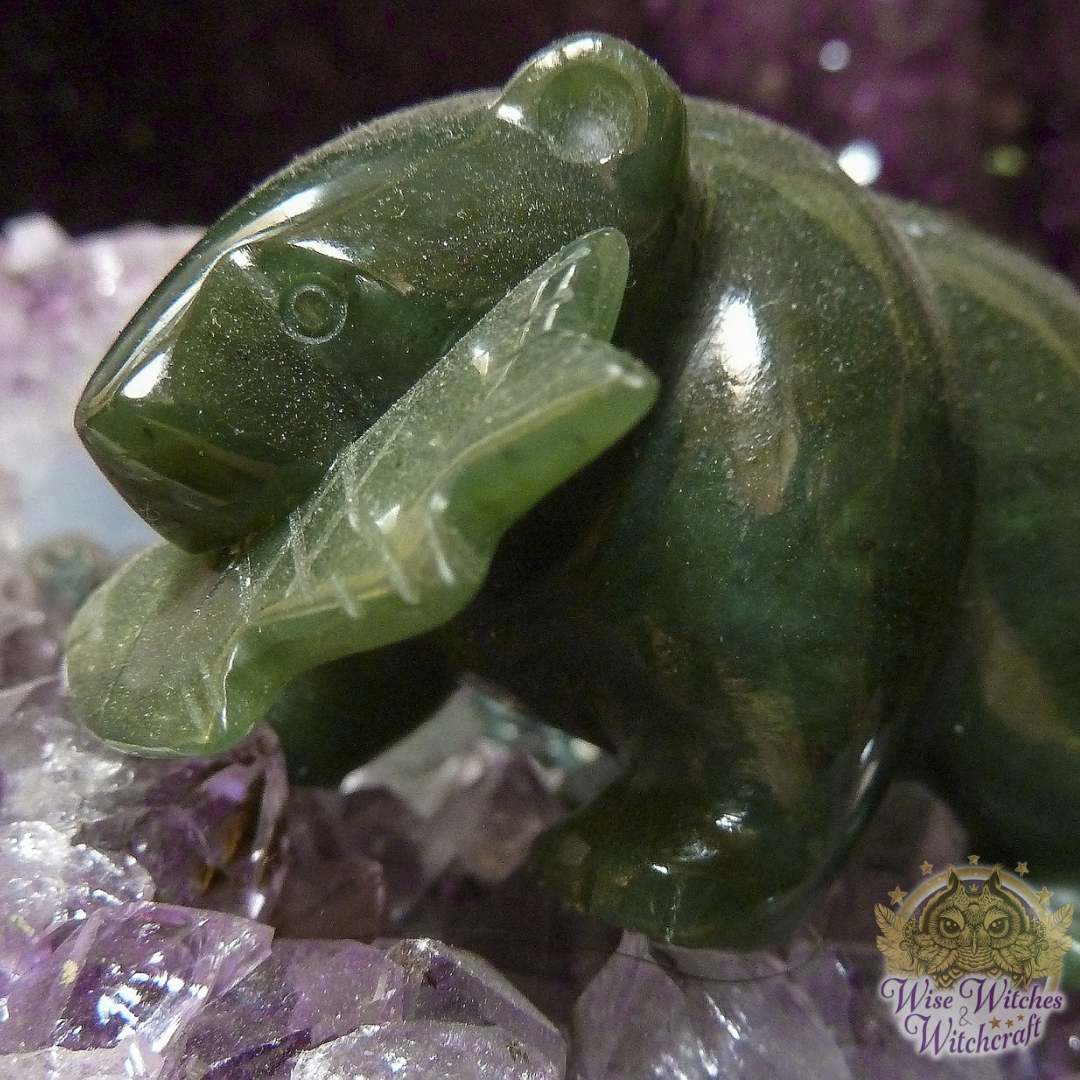 “A speck on a jade stone won’t obscure its radiance.”
– Chinese Proverb

Jade is among the sacred stones from ancient times. In the Far East particularly it symbolized leadership, grandeur, greatness, and distinction. Jade vibrates with the energies of peace, wisdom, and balance. Wise people often tell us that this crystal encourages us toward improving our spiritual awareness. Even with such grand compliments, Jade is a gentle gem that works its wonders with soothing waters vs. a rough rock.

Jade, in many cultures, got its name based on what healer’s thought it could treat. In China, they called it a “Spleen Stone.” The Spanish word meant “Stone of the Loin” and Mesoamericans took the Greek word nephros, meaning kidney, for Nephrite. 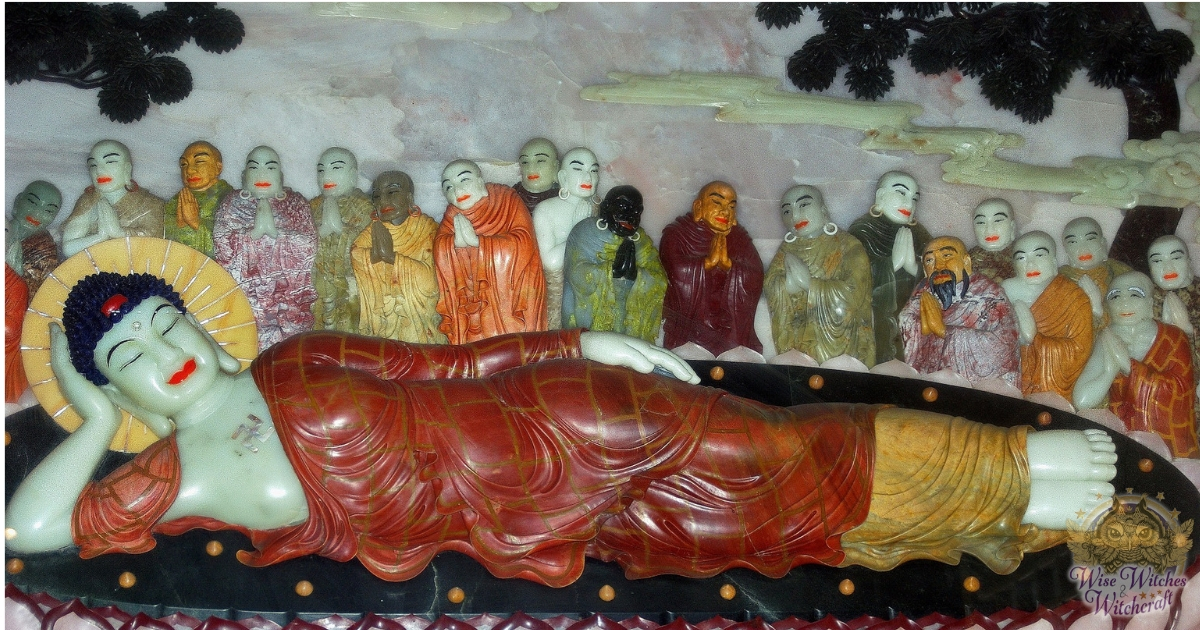 One of the treasured aspects of Jade is that it could be sharpened and polished. People as diverse as those from the British Isles and South America to New Zeland and Medico used it as a knife, axe head, carved it into vessels and statues, made it into beads, fashioned it into musical instruments and even used Jade as a seemly offering to the Gods, particularly those associated with the Water Element.

Jade’s meaning reaches out to us from a rich history. In Mongolia, it was mined as early as 4700 BCE, and probably earlier. Chinese accounts go back to 3400 BCE. Come the time of the Shang Dynasty in China, Jade ornaments were used to decorate the tomb of kings as well as many other ceremonial items. It was nicknamed the “Imperial Gem.” The colors of Jade harvested here ranged from traditional green to black and white, the white being the most precious valued even more than gold. The color association of White Jade with nobility and wealth never faded.

India lays claim to the largest sculpture made from a single Jade stone. It resides in Andhra Pradesh reaching 1.5 meters into the sky. The image is that of Mahavira, an enlightened teacher revered for establishing the five vows of Jainism: being truthful, never stealing, remaining chaste, non-attachment and non-violence. Of the five non-violence was the supreme virtue.

The Maori considered Jade a treasure. They went so far as to protect it by treaty. This treaty ensured that Jade harvesting was monitored closely. This stone’s importance was further reflected by the fact that it was used in exchange as part of sealing agreements.

Spiritually speaking Jade attunes itself to the Heart Chakra, which is also green. Receiving a gift of Jade is said to bring abundance, health, and luck into your life. Carry a piece with you as a charm. Pieces of Jade placed in your magical garden improves the overall health of the soil and the plants.

As with other healing crystals, Jade has various colors each of which changes its applications metaphysically and magically:

Black Jade: This protective stone acts as a ward against negativity, including unproductive self-doubts we personally carry.
Blue Jade: Wearing Blue Jade when meditating can inspire visions. It also resonates with peacefulness. Put a piece under your pillow for vibrant, meaningful dreams. Wear a piece near your neck for balancing the Throat Chakra.
Brown Jade: This version of Jade ties to the Earth Element providing grounding and dependability.
Green Jade: Green Jade inspires love and devotion. It protects promises, health and encourages compassion.
Lavender Jade: Jade in this lovely hue promotes healing, especially of an emotional nature.
Orange Jade: This color of Jade has ties to the Fire Element in that it’s very energetic. Orange Jade supports happiness and a sense of connection with life’s network. This Jade works cooperatively with the Sacral Chakra.
Purple Jade: Purple Jade has a high vibrational level that corresponds to the Crown Chakra. This inspires psychism and a stronger connection with the astral realm.
Red Jade: Red represents action, our fight or flee instincts and matters of survival. It is the color of the Root Chakra.
White Jade: This crystal acts as a clarifier that balances your aura and focuses your mind. It also represents prosperity and mastery.
Yellow Jade: A very happy stone filled with delight and optimism. Yellow Jade interacts with your Solar Plexus Chakra that controls your personal power and mental keenness.

For Virgos out there, Jade is your birthstone. Wearing and carrying it brings luck, providence and overall blessings. Jade embodies your hopes and dreams while encouraging a heart filled with gratitude. 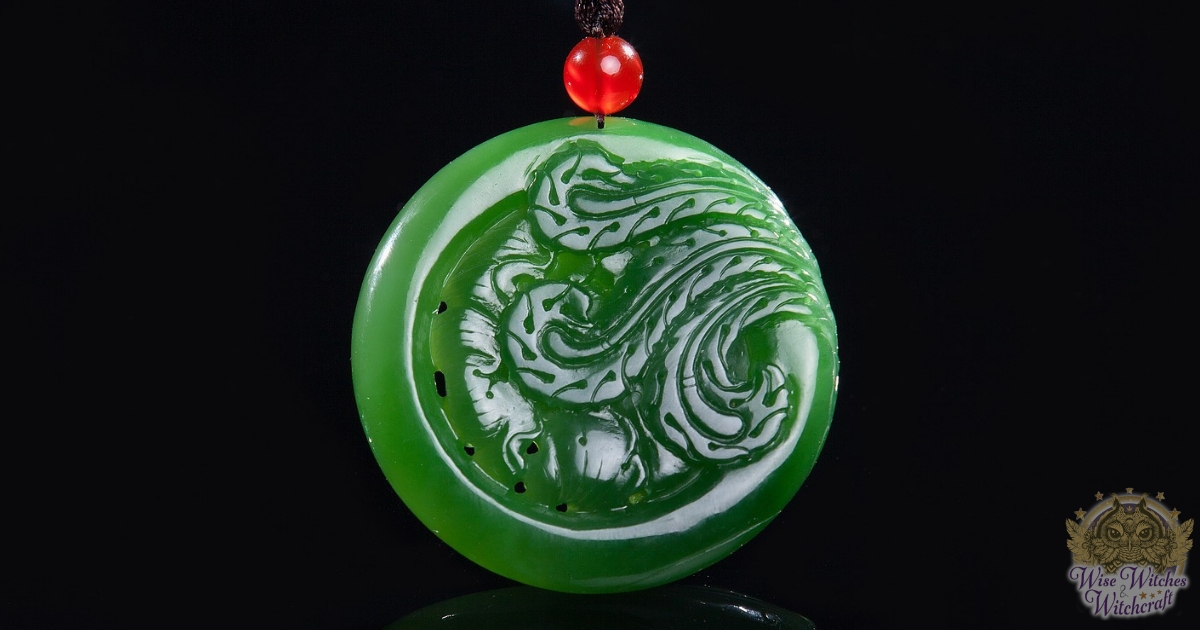 Crystal healers tell us that Jade has stabilizing energy. It reduces stress and fear along with negative thoughts. The presence of this stone calms and cleanses your aura.

Physically we are told that Jade is akin to a good, long bath in Epsom salts. It helps our bodies get rid of toxins while balancing alkalines. The key areas that Jade energies help include the kidneys, spleen, hips and overall digestive system. Carrying it also seems to reduce pain and improve reproductive processes.

Emotionally Jade is great for people who are always cranky. It acts as a balm so that your ideas get in order. It also helps with memory, particularly with psychic dreams (keep a journal handy). Jade improves our sense of self and celebrates our aptitudes without pretentiousness. When you are shaking in your boots with no confidence left, Jade is your healing stone.

Because Jade is a heart stone it has often been suggested for couples who are struggling with their feelings. On a similar note, people who have lost their sense of pride because of other peoples’ harmful opinions will find that Jade boosts self-worth. 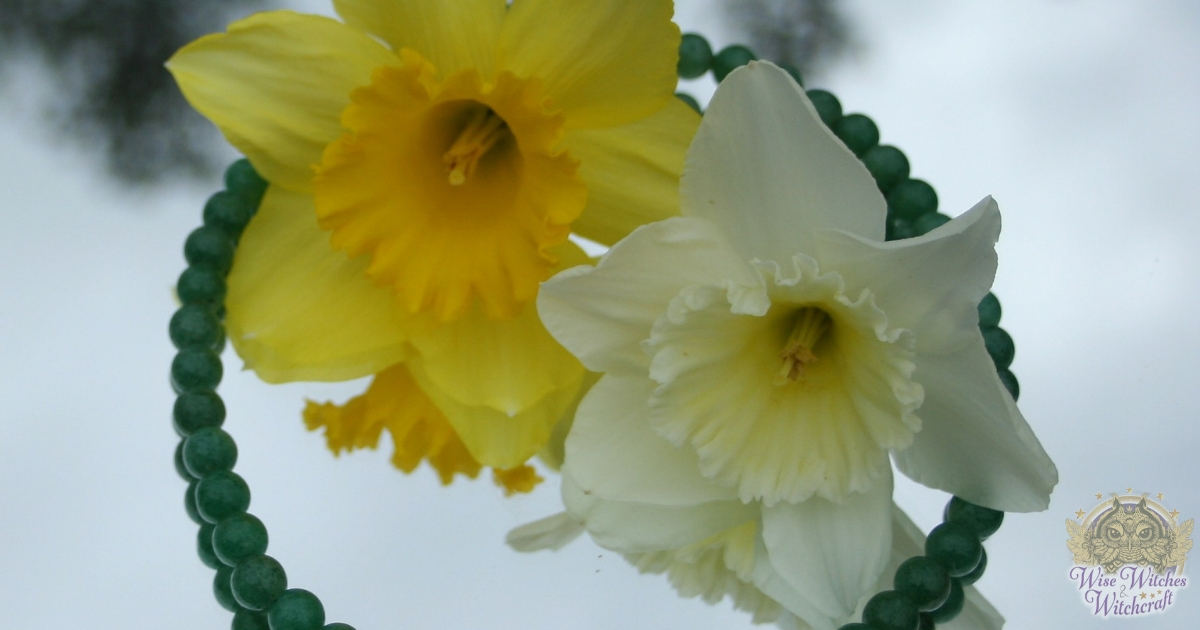 In Metaphysical circles, Jade is a stone of wisdom and balance. For those working with Astrology, the different types of Jade provide an overall “tune-up” to your spirit. It can also assist you in understanding how your birth sign affects your personality and character.

Wearing Jade jewelry enables self-control, especially if it’s lavender colored. Black Jade speaks to our use of power and overall spiritual sagacity. Any type of Jade works cooperatively with meditation and serious thought. If you use one particular stone regularly you may find the Stone Spirit gives you messages in some manner. You may feel a texture in your hand, smell something in the air or get a symbolic image in your mind. Definitely pay attention and make note of this. It may take you a while to completely understand what your crystal says, but it’s always something you need to know.

Feng Shui practitioners connect Jade with the element of Wood. This element represents refreshment, vitality, growth and new opportunities. If you have a new project at home or work, keep a piece of Jade nearby.

There are myths and beliefs around the world about Jade and its uses. All of these contribute to our metaphysical understanding of this wonderful stone. Let’s take a look:

It seems no matter the setting there was something special about Jade that set it apart in people’s minds, hearts, and spirits. 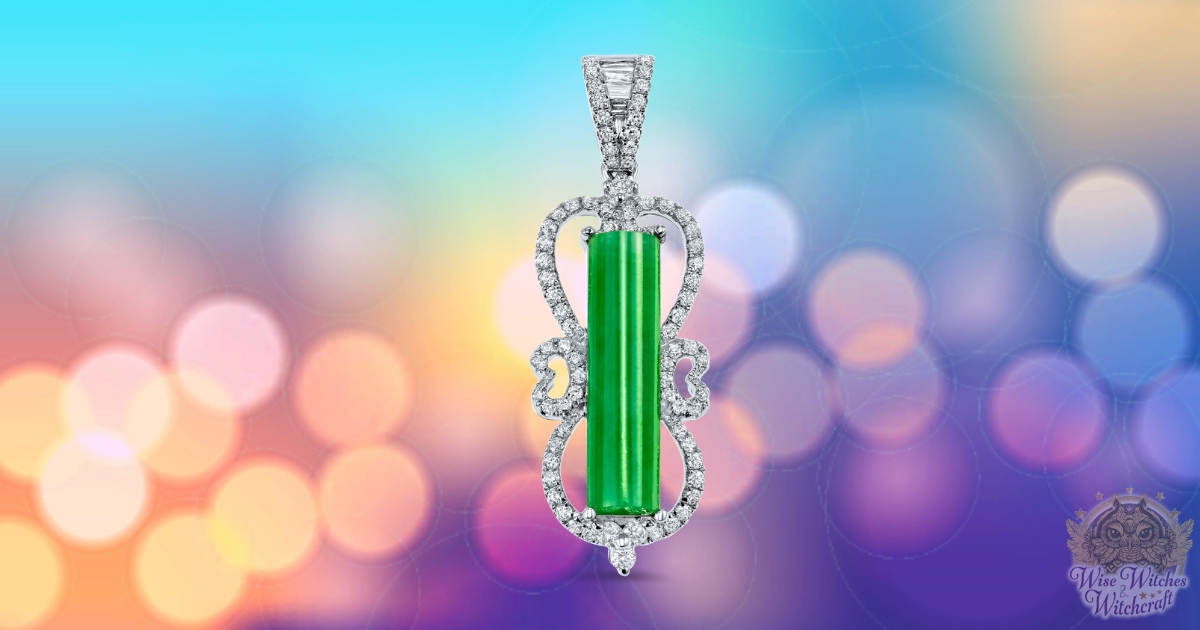 For Witches and Neo-Pagans who do dream work, Jade is supposed to be the end-all and be-all crystal. Using it brings dreams that reveal bits of ancient knowledge, inspire your muse and show you more of the Spirit Realm.

There are many reasons why Jade ended up in amulets and talismans. Some safeguarded health and longevity. Others brought friendship and good luck. Others still were truth-seers, showing us hidden matters even in ourselves.

When you feel like your magical is lame, wear a Jade pendant. This piece of jewelry is also good for people with poor immune systems or those overcome by guilt. Bless and charge your Jade for its intended function.

If you have a trip planned, amp up a piece of Jade in sunlight and put it in your gear. This deters injury and generally brings good vibes your way. If this is a romantic getaway, even better!

You can create Jade charms, amulets and talismans for any number of purposes. These stones shine a light on any grey areas in an agreement or situation. They support people in educational and healing fields in terms of making practical choices. If you have a financial transaction take a Jade with you and check those bit of fine print.

Chinese tradition tells us a bit about gifting Jade as a magical token. A phoenix figure is for girls coming of age rituals. A person riding on a unicorn is for newlyweds who wish to conceive quickly. The image of two men together is exchanged between friends as a gift of spiritual love. In any form, Jade protects the people and things yo hold dear and promotes harmony. 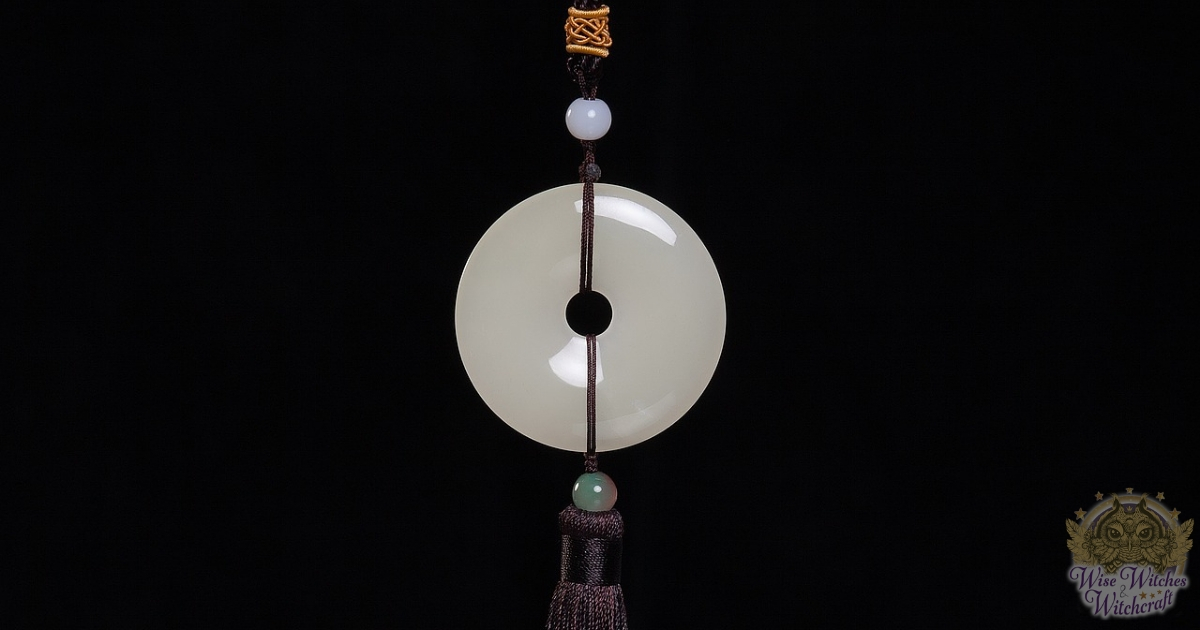 Jade has a hardness of 6.5-7 on the Mohs Scale. Jade is really made up of two minerals, Jadeite and Nephrite. The first has a calcium element and the second a sodium one. Nephrite gives us white, olive green, brown and black hues with a smooth surface. Jadeite comes in a variety of green hues along with pink, red and orange. This is not as common as Nephrite. Of the varieties, a translucent green Jadite is the most highly valued.

These two stones were not distinguished from one another until the mid-1800s, but both have become known as Jade. Craftsmen love Jade, particularly that from Burma which polishes up to a high luster.

In shopping for Jade, it’s important to know that some things called Jade are not this healing stone at all. Amazon Jade is really Amazonite, Garnet Jade is green garnet, Honan Jade is serpentine, Indian Jade – aventurine, Oregon Jade – Jasper and so on. These crystals, while pretty, do not have the same vibrational footprint as true Jade.

NOTE: There are pieces of Jade that have been treated in a variety of manners for greater color and shine. Heat, dye, acid, wax and other additions made to the stone are not suited to magical efforts.