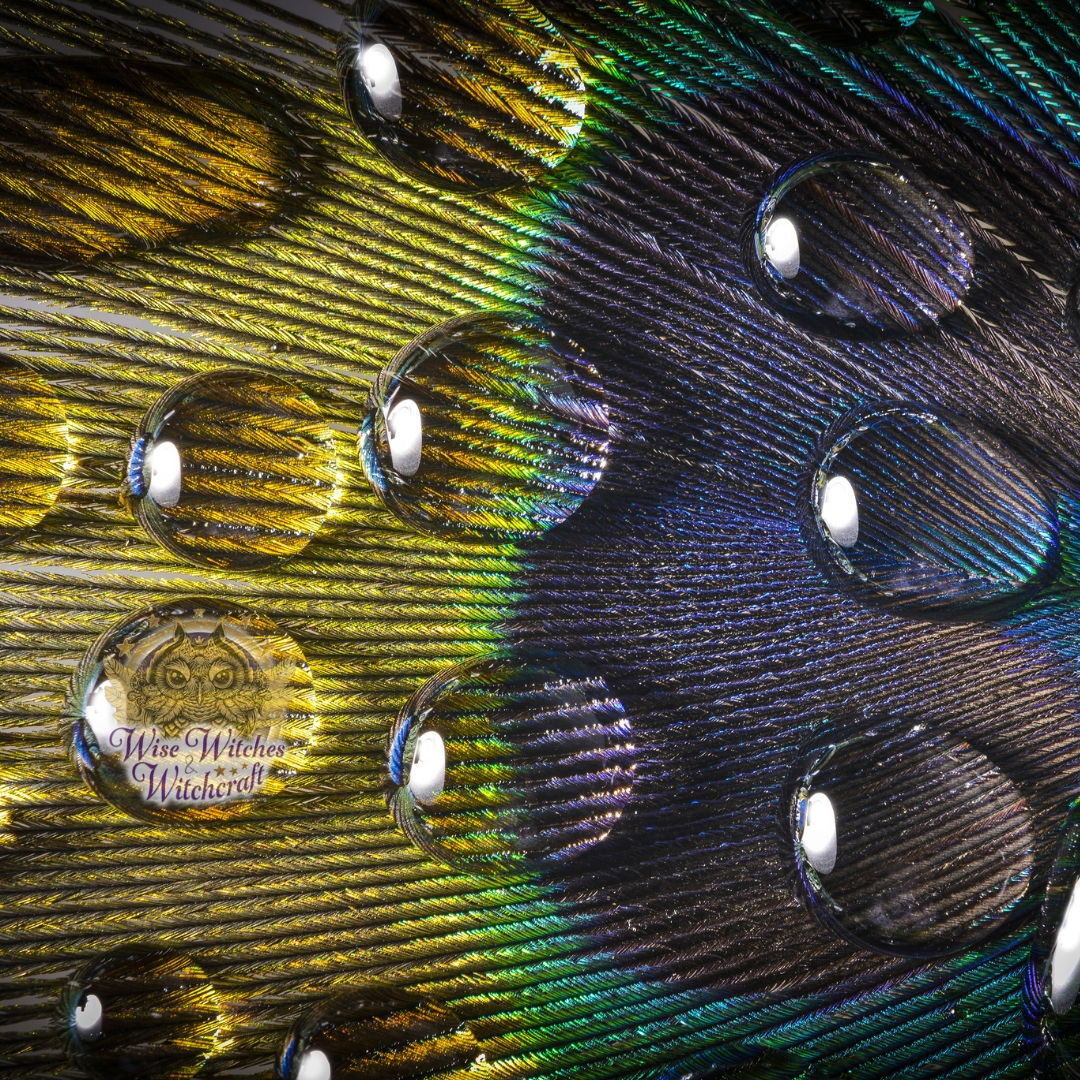 “Water does not resist. Water flows. When you plunge your hand into it, all you feel is a caress. Water is not a solid wall, it will not stop you. But water always goes where it wants to go, and nothing, in the end, can stand against it. Water is patient. Dripping water wears away a stone. Remember that, my child. Remember you are half water. If you can’t go through an obstacle, go around it. Water does.”
― Margaret Atwood

In Wicca and, indeed, many other spiritual practices the elements have a personality of sorts. While Western and Eastern designated Elements have differences, the core idea is the same. The Elements are Powers – energy sources – and each has corresponding areas that they influence. On the Western side of the pond, Water is among 4 or 5 Elements, the others being Air, Fire, Water and (if included) Spirit. 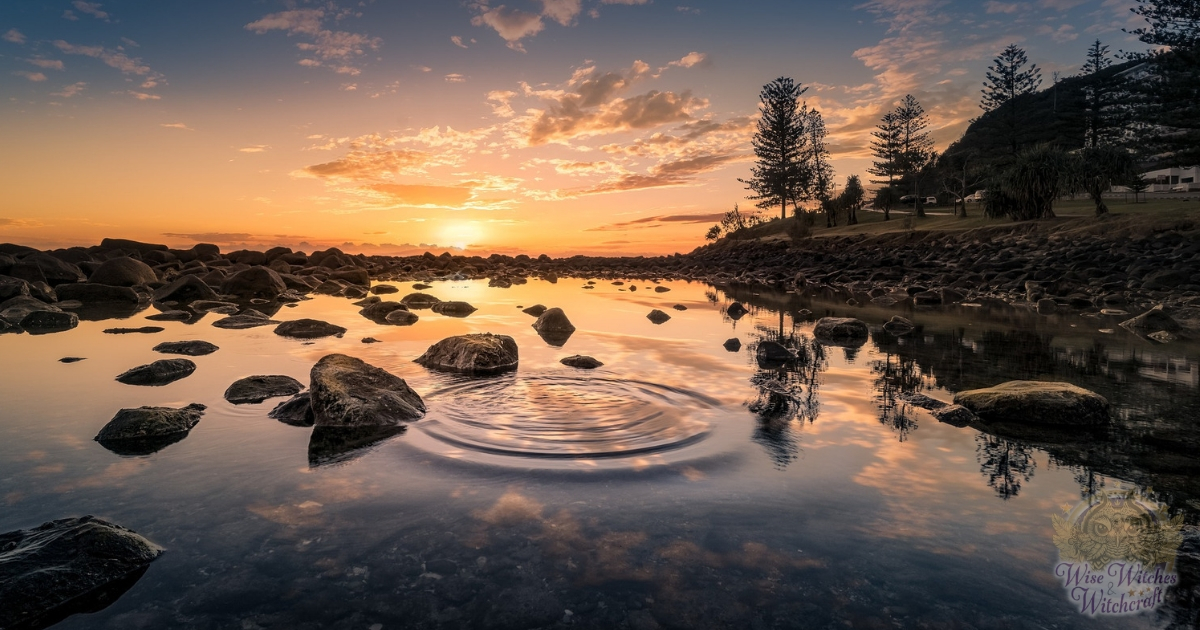 Greek philosophy places Water among the classical elements, meaning it is one of the substances to which all other things can be reduced. They were also aware of the power represented by the way in which water transforms from liquid to solid and vapor. The Greek observations were certainly not alone in global thinking.

Water’s Essence Around the World

Finally, manly traditions say that the soul moves West (toward the water) in its journey toward the afterlife or that they travel on the water to the underworld (the River Styx).

Magical Definition of the Water Element 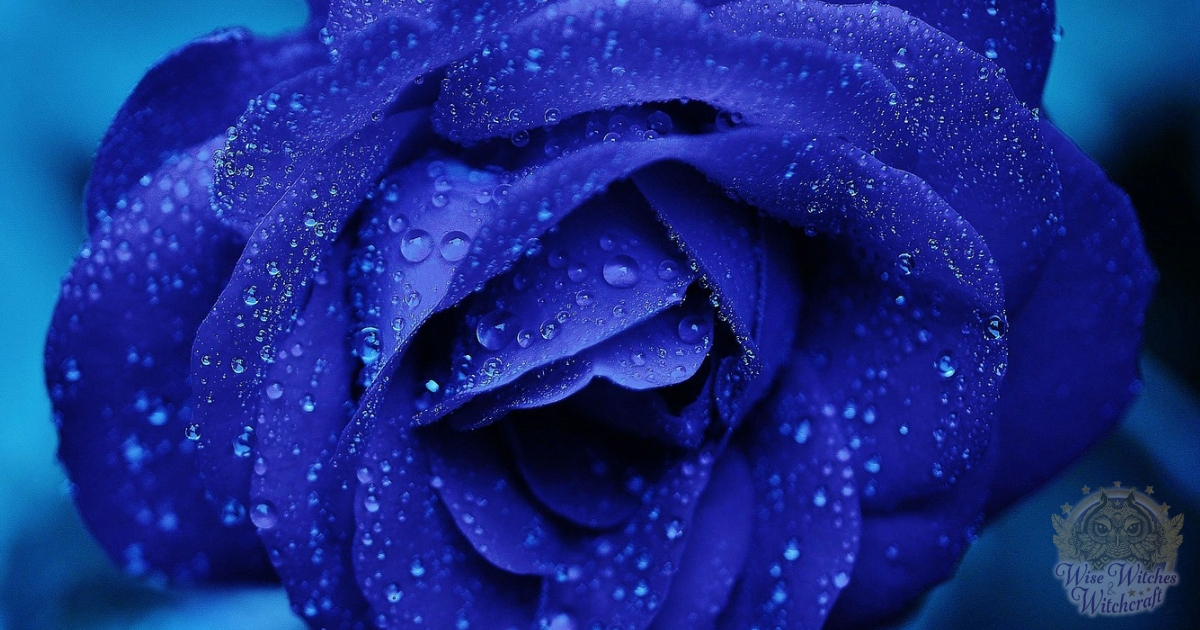 In Wicca, Paganism and Witchcraft, Water has two important roles: that of a symbol and a tool. It’s common practice for a witch to use water as a means of cleansing items for the altar, for example. In this illustration, the water’s association with purification combines with the action of asperging in which the water becomes a tool.

In Wiccan sacred space, Water resides in the Western quarter of creation. This guardian power may be invoked for rituals and spells, especially those focused on the psychic self, emotional issues, love, fertility, healing, and renewal. 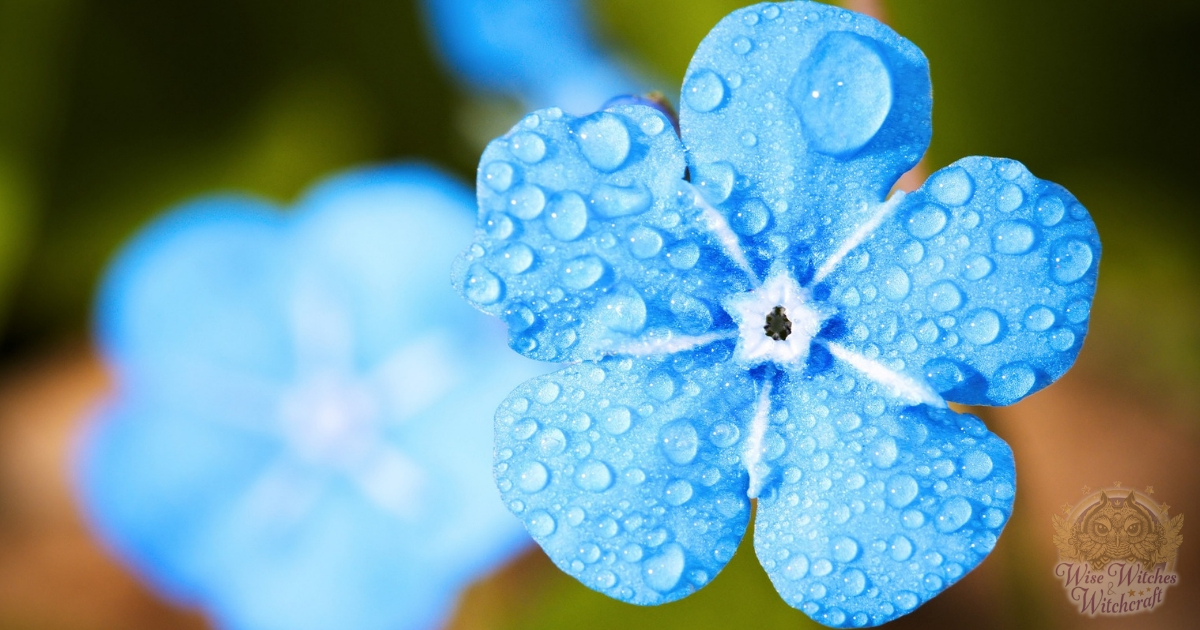 Magic goes further, categorizing everything by the Elements. Water plants are those that depend on water, live near water or have cooling/healing aspects. Examples include aloe, lotus, water lily, willow trees, seaweed, and reeds.

Water stones and crystals are those that typically have varying shades of blue or green and those often found in or near water. Examples include opal, blue tourmaline, aquamarine, moonstone, lapis, and blue lace agate.

And animals? Dolphins, sea snakes, whales, and seabirds are all examples as well as the mythic Undines. 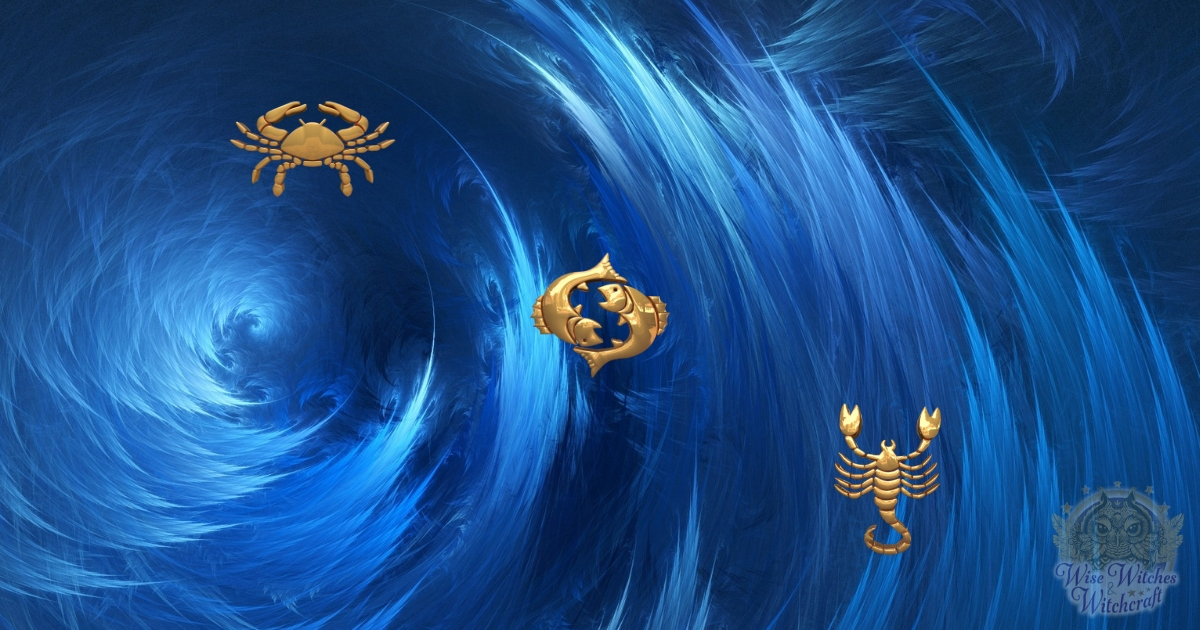 The study of the way in which celestial objects influence our lives is Astrology. The ancients who practiced this art also used elemental symbolism. They connected both the moon and Venus to water along with these zodiac birth signs:

Cancer the Crab: Energies of clarity and rejuvenation.
Scorpio the Scorpion: Energies of quiet, personal reflection, diving into the “unknown”
Pisces the Fish: Energies of emotion, movement and vitality.

Water Symbolism in the Tarot 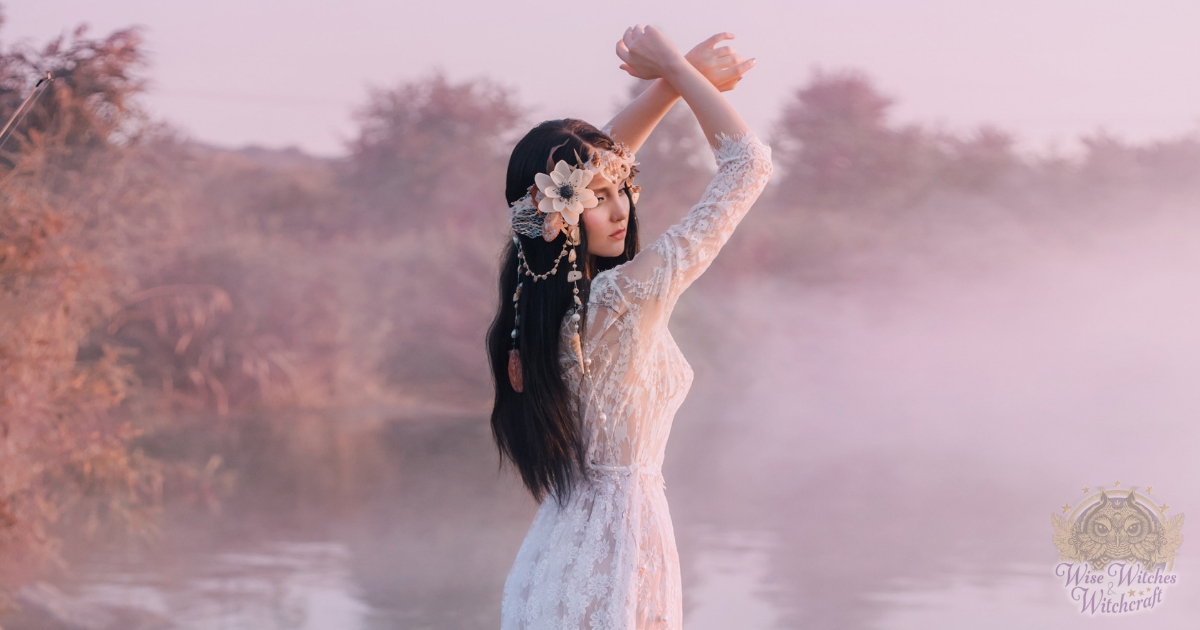 The Suit of Cups (or another type of vessel) come under the dominion of Water. This part of the Tarot speaks of our relationships and feelings. Three Higher Arcana cards also connect with water namely the Star, Moon, and Temperance. 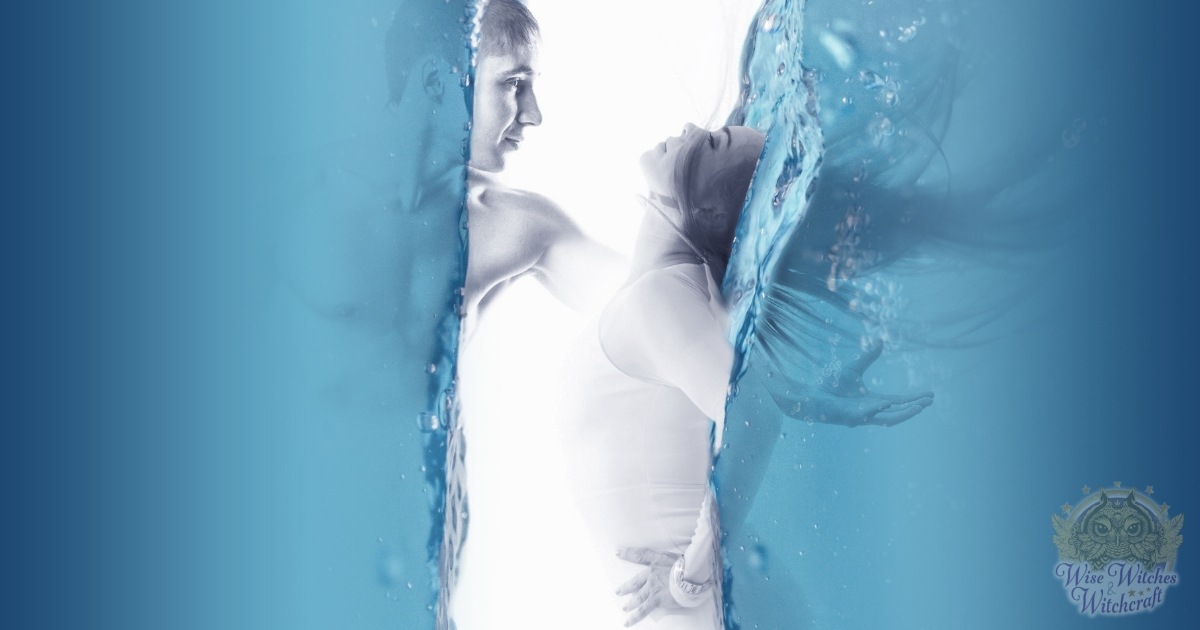 Water resonates with the Master Number 22 in Numerology. This figure represents the spirit’s capacity for manifesting hopes and dreams. It also symbolizes determination (water gets its way)! There is a lot of potential in 22. Think of it this way. A puddle is but a few drops of water. Keep adding drops, and you get a pond and continue from there .. as big and beautiful as you wish.

Forms of Water for Magic 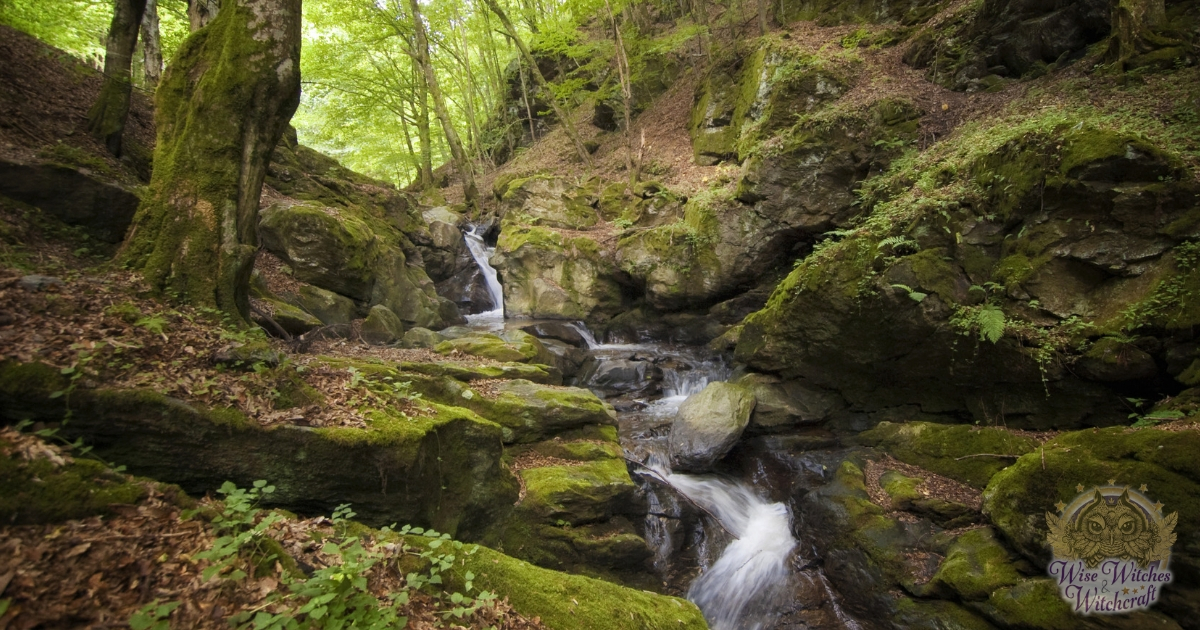 One of the beautiful things about water is that it has so many different structures and manifestations, each of which provides us with symbolic value for our spells and rituals.

Dew: May Day dew, in particular, is said to have magic power for beauty and improved eyesight.

Lake or Pond Water: Simplicity, serenity, happiness, ease. Think of this as the old fishing spot of magic.

Muddy water (swamp water) also still water: Decay, banishing, ending. When you want to put old, outworn thought forms away, release a symbol of them to a region of still water or mud.

Sparkling Water: Fun! Upbeat emotions. Enjoy this when working with your inner child.

Snow: Transitions; rest. Plant the image of an area of your life where you want slow change in the snow. While you do so, envision harvesting your desires in the spring.

Waterfall: Exuberance, release, power. The sound of a waterfall often helps with meditation or visualization.

Well Water: Wish manifestation, insight, health. Use the old “toss a coin in a well” while wishing as perfectly viable magic. Or perhaps you could gather well water and use it in a wishing spell.

On Being a Water Witch 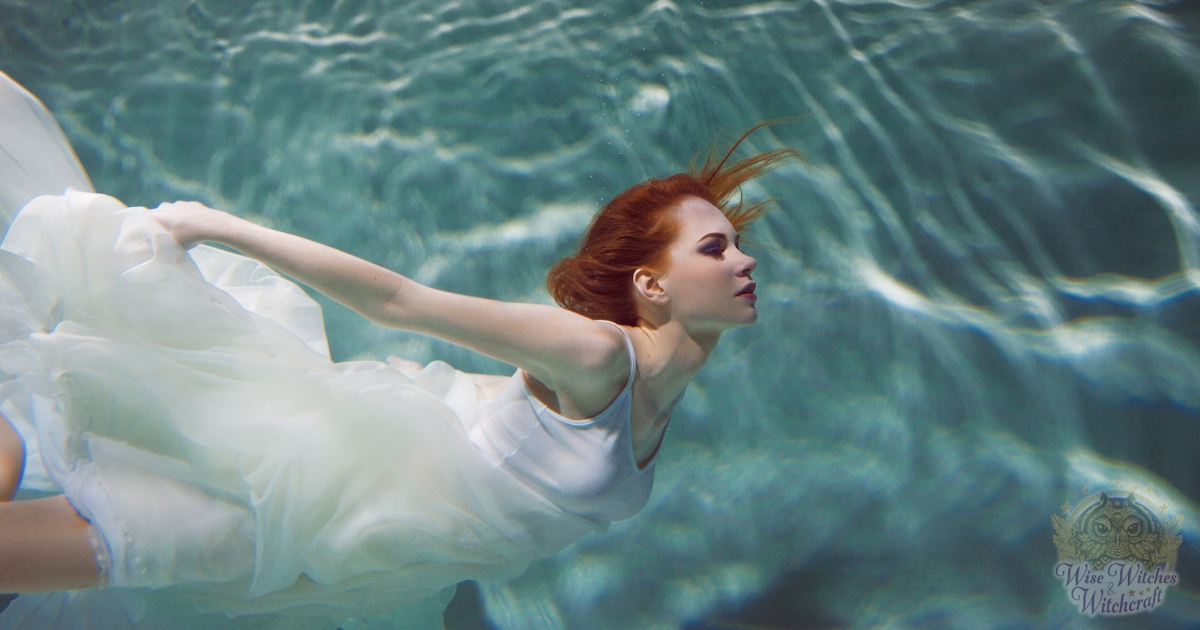 Some witches choose a magical vocation or focus, one of which is Elemental magic. The sub-schools here are each of the Elements, most people looking to one that really expresses their spiritual vision. In many of the world’s myths, the Divine forms from the waters of chaos. With the Water Witch, it is her magic springing forth.

You can tell you’re working with a Water Witch through her personality traits. This witch knows how to move… to go with the flow. He may also be a mover that creates little energy ripples that go across space and time. And there is not much you can hide from this practitioner. Even when walking on land, she is fully aware of all the life below and above, and all the things that try to remain hidden.

Because of the Yin nature of Water, these witches have close ties with the Sacred Feminine in some form. They also honor the moon whose movement brings the tide in and out again. With this in mind, it’s not surprising to find the Water Witch specializing in magic dealing with:

In the sacred space in her home, the Water Witch is rarely without one or more fish or a turtle. The colors that surround are those of the ocean and the sparkling hues reflecting off the water’s surface. And because living waters are untamed, this space is rather precocious and quirky too.

It’s not uncommon for Water Witches to feel called into service for a good cause. They also enjoy any career in healing modalities be it body, mind or spirit. There is no question this Witch has an abundance of passion, and when she puts that energy into motion – wait for the wave!

Some Water Witches, particularly those of a Wiccan bend, may look to various Gods and Goddesses of water as patrons. Some well-known names include Poseidon, Isis, Llyr, Anuket, Electra, Oceanus, Apah, Varuna, and Tiamat. 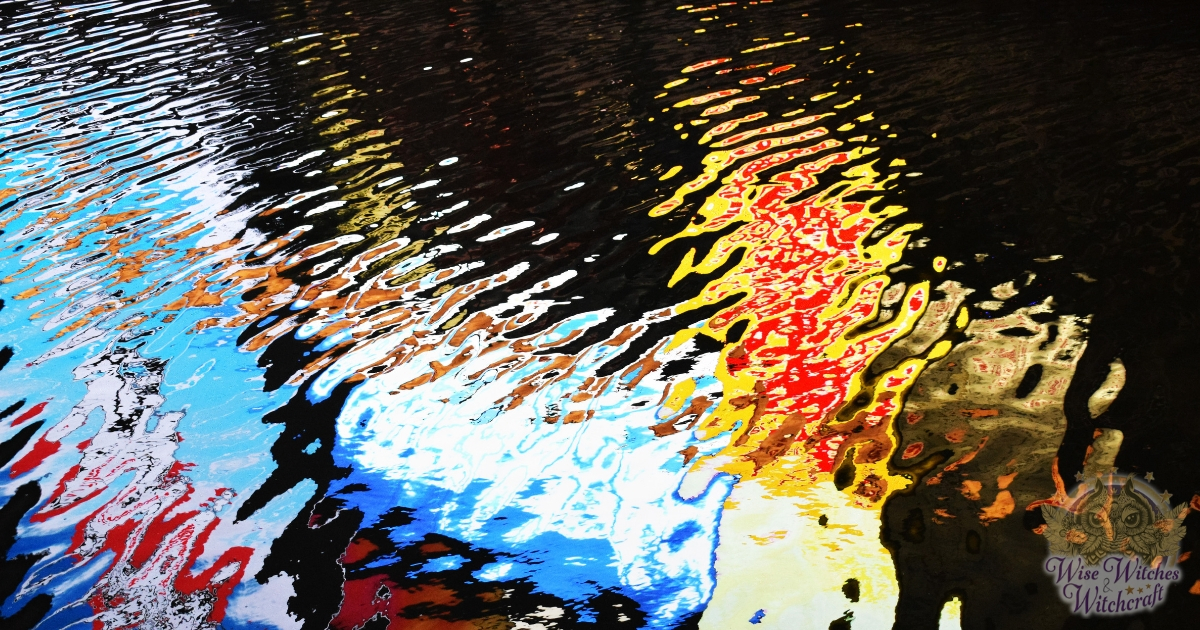 Water appears in many types of divination and spellcraft instructions. This reflects a reverence and respect for water as well as one of the things that makes water so special: Availability! Everyone has access to water in one form or another on a regular basis but for extreme circumstances. The ancients, aware of this, put the element to good use!

Hydromancy is the broad term of any form of divination that utilizes water. In Rome, the color of water and images thereon were an important method for prognostications during the Mithridatic Wars. In the 2nd century CE, women tossed bread into wells hoping it would sink as that meant blessings from the Goddess and good fortune. In the 1500s a Jesuit priest wrote of various methods that included tossing pebbles into the water and observing the ripples.

Many other approaches use water as a means for obtaining important perspectives on the present and future. Two of the methods that remain very popular are water scrying and water witching.

Water scrying utilized a bowl of water (usually a dark-colored one) filled with water. The diviner would observe the water waiting for images or clouds to appear. In some cases, they would take the bowl beneath a full moon anticipating better results. Or, a diviner might forego a bowl altogether and sit near any body of living water.

While whole books have been written listing the meanings behind various images appearing in the water, there is some continuity on simple inquiries. If the diviner sees wisps moving upward or to the right – the omen is positive. Up and to the left means “no” or “stop.” Clouds or veils that split indicate no answer is currently available – fate’s web is knotted.

Water Witching, as the name implies, is a type of dousing method often employed by the ancients for finding water. Sometimes the approach was also used to discover a hidden treasure or the best placement for a sacred temple. It begins with a forked stick often harvested from Willow wood (aligned with the Water Element).

The dowser takes the Y portion of the stick in both hands with the “leg” facing away. This remains parallel to the ground. The dowser then starts walking over a tract of land. When the stick points downward, that’s where you start digging.

While the efficacy of Water witching is under scrutiny, it remains in popular use from the 1500s onward. In fact, geologists, at the turn of the 20th century, went so far as to conduct studies on Water Witching that were later presented to the Smithsonian Institute. Some renown dowsers included John Locke and President Herbert Hoover.

In designing any magical process using water, the “rules” are pretty much the same as any type of spell. The components and process should make sense considering your goals.

This little potion begins with a glass of fresh water and a clean moonstone. Put the stone in the water under the light of a full moon. Looking at the reflection of the moon off the water use an incantation like:

Water, Water in each sip
Intuition lingers on my lips
Water, Water blessed by the moon
charge my senses to attune!

Remove the moonstone and drink the potion. You can keep the stone as a portable charm for improved sensitivity and psychic awareness. 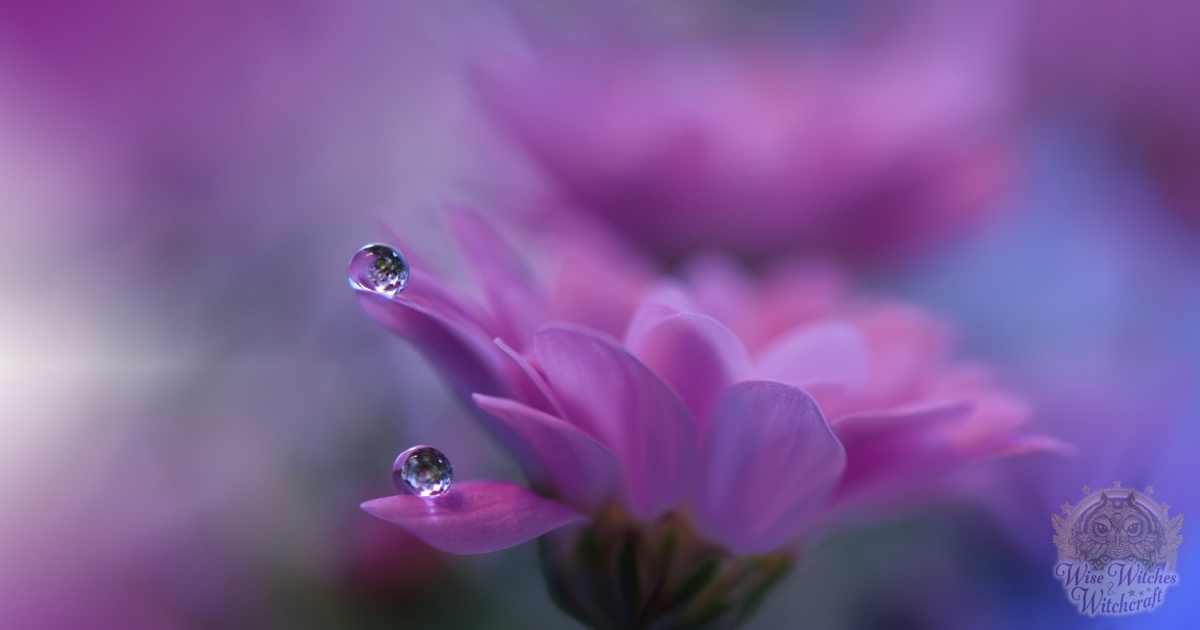 Faiths around the world use water as a means of preparing a person before they stand in front of the Divine. To arrange a cleansing and blessing bath, gather herbs known for their purifying nature like lemongrass, salt, and sage. Once you collect the components, charge the herbs with a spell-like “My spell now woven will not be broken; away from me all negativity. On these herbs bestow a purified glow. Once in water unbind, cleansing is mine.” Place the bundle in hot water to activate the energy while you prepare for your bath. For a more relaxing atmosphere, affix a candle to the tub, burn incense, and play quiet music.

As you wash, name different regions of your body after things you want to cleanse. One spot might be anger, another, a tendency to gossip, and so on. When you are finished, towel off and go straight to your magical tasks.

If you don’t have a tub, a shower will work effectively too. Hold the cheesecloth bundle under the water and squeeze the aromatic juice over your body. Or hang the tea ball from the shower head. Alternatively, purchase some appropriately scented soap.

Post Script: Some or all of this information on the Water Element might suit your Book of Shadows.

If you would like to read more about the 5 Elements, their symbolism and meaning, can read more on our sister site BuildingBeautifulSouls.com