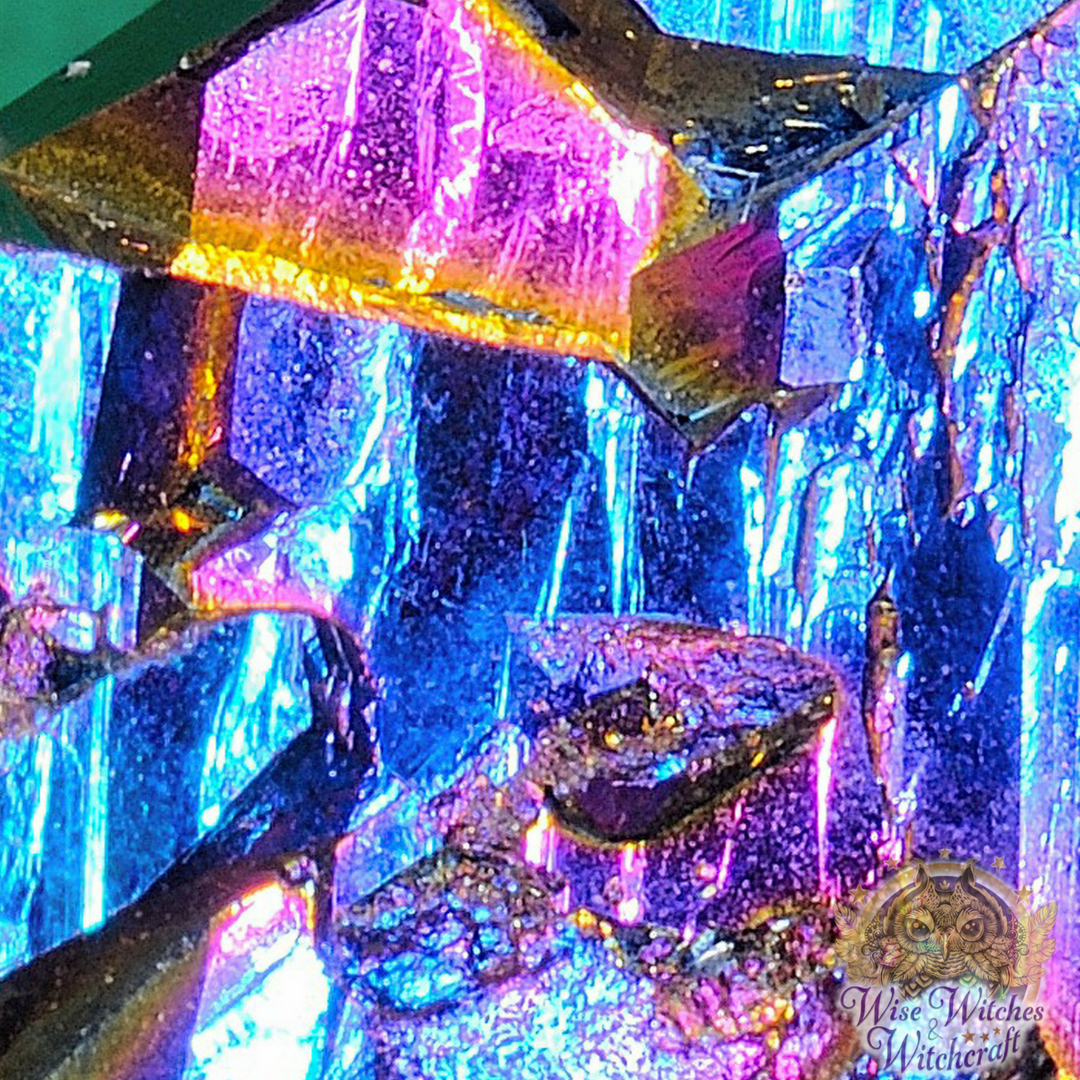 “In a crystal we have clear evidence of the existence of a formative life principle, and though we cannot understand the life of a crystal, it is nonetheless a living being.”
-Nikola Tesla

Sensitives throughout the world regard Azurite as a heavenly stone that resonates with our Higher Self and the goal of enlightenment. Wearing Azurite opens your aura to energy and messages from the Astral realm (along with that of Animal Guides and Nature Spirits). This unblocked state of being means that your intuition and psychic nature amp up, affording greater precision. It’s no wonder that Light Workers, healers, witches, and shamans all appreciate this stone’s inherent vibrational characteristics for many purposes.

The Magical Meaning & Properties of Azurite 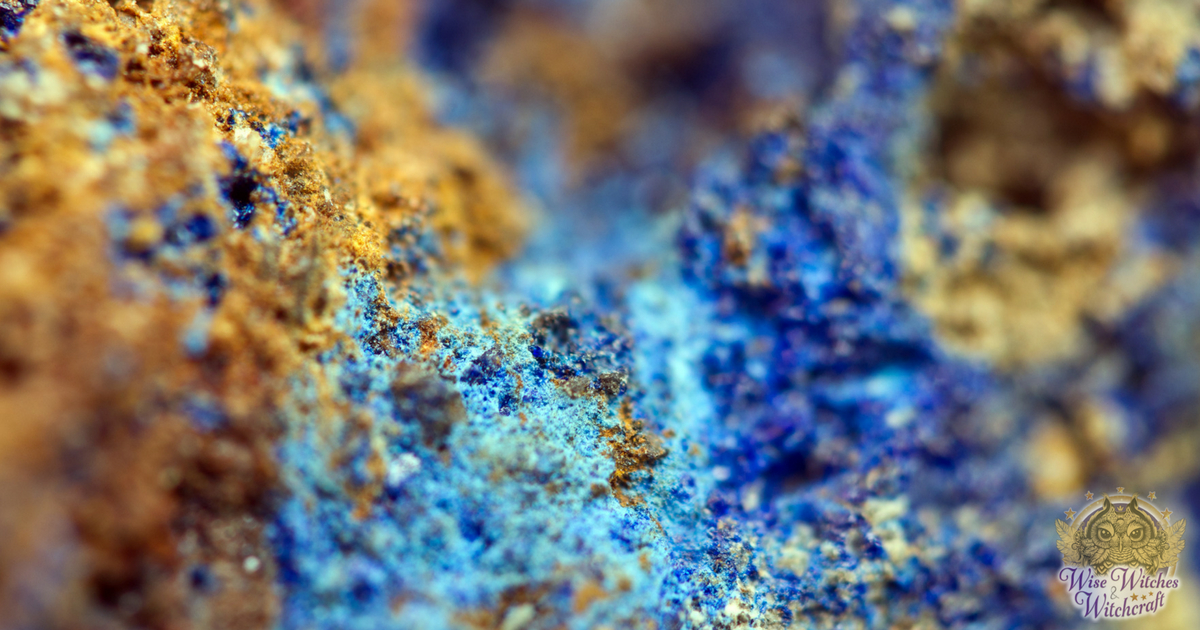 From the New Age Perspective, Azurite aligns itself with what is known as the Blue Ray. This is one of 7 energetic Rays that are part of our personality and Soul’s mission in this incarnation. The Blue Ray is one of love and elevated wisdom. Thus, Azurite’s meaning and symbolism include patience, devotion, clarity, serenity, and Truth (with a Capital T!).

Think of Azurite like the dial on your personal radio. It removes static that, in turn, keeps you in better contact with your Guides and the Divine. Beyond this, Azurite keeps your spiritual senses on the lookout so that otherwise unanticipated transitions go smoothly. In fact, Azurite is a fantastic crystal when you want to make important changes, especially concerning the feminine attributes of self. It won’t make your efforts “simple.” Effective learning doesn’t work that way. Instead, it acts as a support system that maintains your focus and clarity.

In areas of the world where blue was a sacred hue, like Egypt, Rome, and Persia, Azurite had an important role in rituals. Priests and Priestesses used Azurite for opening doorways to the Gods. Even halfway across the world, Mayans felt that Azurite facilitated psychic connections, not only between humans and the Divine but also between people.

The indigo hue of Azurite vibrates with the Third Eye chakra, which is the gateway to our magical, Psychic self. The sensitivity that inspires helps with everything from casting spells and divination to memory retention and astral travel. It’s almost as adaptable as Quartz in this respect.

Azurite is often found together with Malachite, a lovely green stone. This combination inspires creativity, effective communication, taking positive action and flexibility. Just be aware that initially, the power of Azurite and this blend can be a little overwhelming. It challenges us to release the old and get ready for the new, improved way of seeing things. Take your time getting to know this stone’s personality and be ready for fascinating changes.

Azurite shares a linguistical connection with Lapis, namely the Persian term lazaward, basically translating as “blue colored” (direct and to the point). 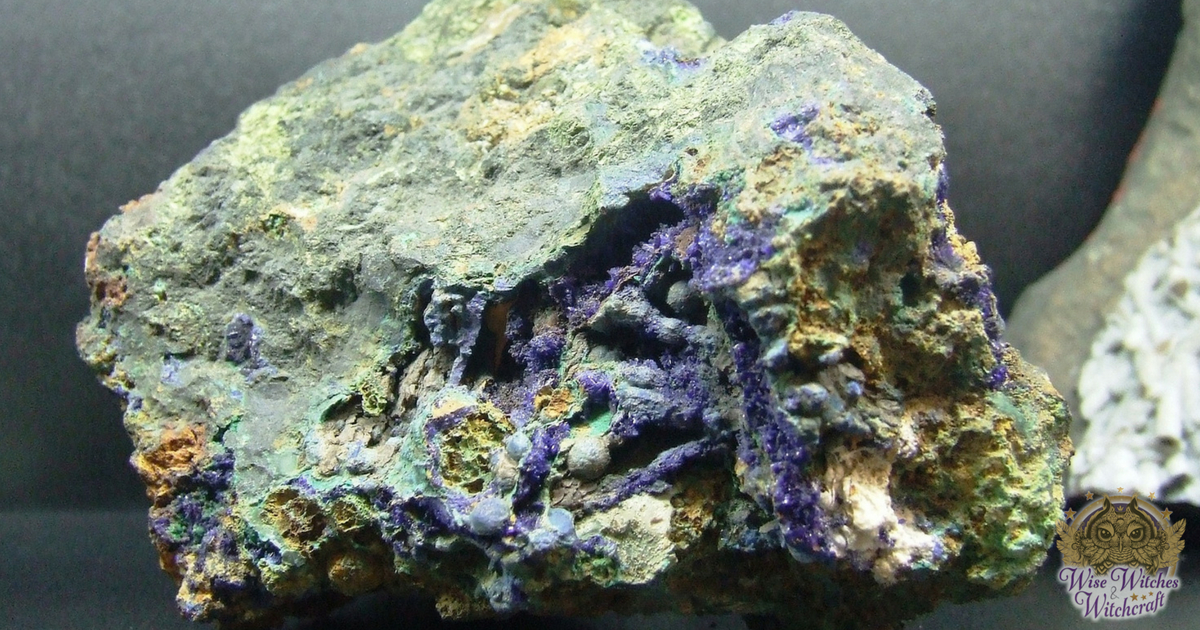 Azurite has many wonderful healing properties. For those with a lot of stress in their lives, carrying Azurite battles the accumulation of tension and negative thoughts that come with it. This improves mental clarity since tension makes a lot of mental clutter. Other ways in which you can use Azurite as a healing stone include:

Overall, Azurite has a peaceful energy even though it’s highly motivating. Rather than acting out of fear, frustration, or pressure, you can engage your life from a place of inner knowingness. 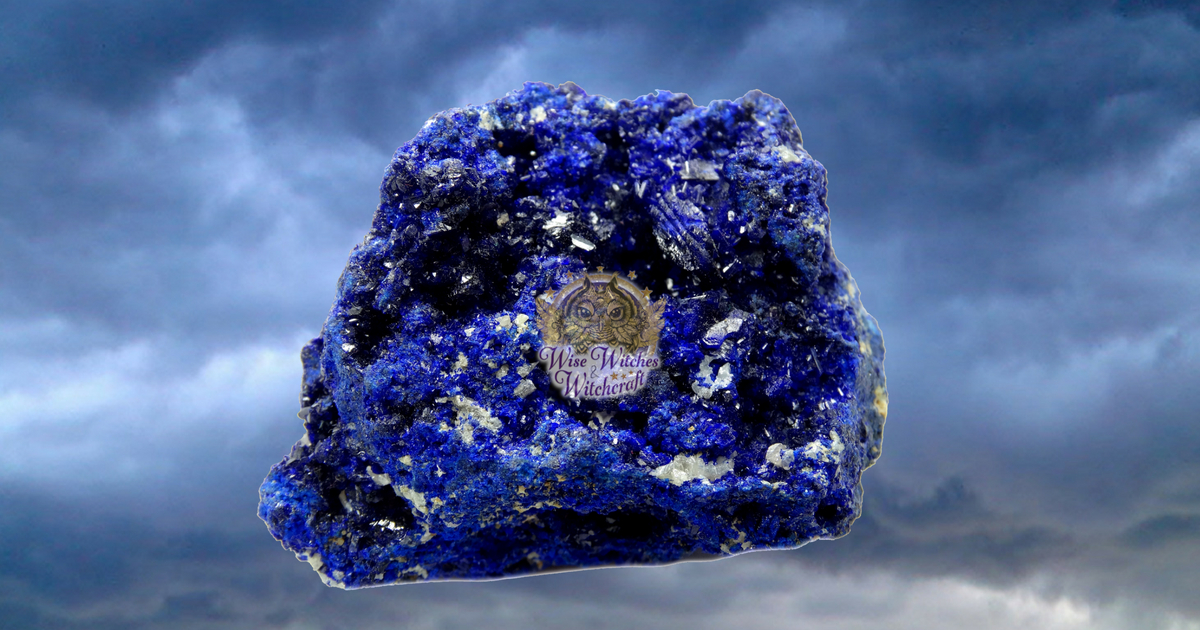 Metaphysically the crystal energy of Azurite attunes to our psychic insights the Throat, Third Eye and Crown Chakras and Element of Air. If we look at Air specifically, it’s easy to see why Azurite was associated with it. The Element of Air presides over communication, alertness, perspectives, objectivity, and cooperation – all characteristics known in Azurite. Those born under the Zodiac Signs of Aquarius and Sagittarius benefit from wearing this stone as a helpful charm.

Some mystics believe that Azurite originated in the lost city of Atlantis. The Egyptians treasured it for aiding spiritual communications, often carving it into magical jewelry and artistic renderings, often as the blue eye of Horus. Historians believe that its use as a pigment dates to the Fourth Dynasty in this region. Here are some other peeks at Azurite’s role in metaphysical history:

Azurite is a touchy, delicate stone. Cleansing with water is not recommended. Instead consider alternative approaches like leaving it in the light of the sun/moon, smudging and visualization instead. 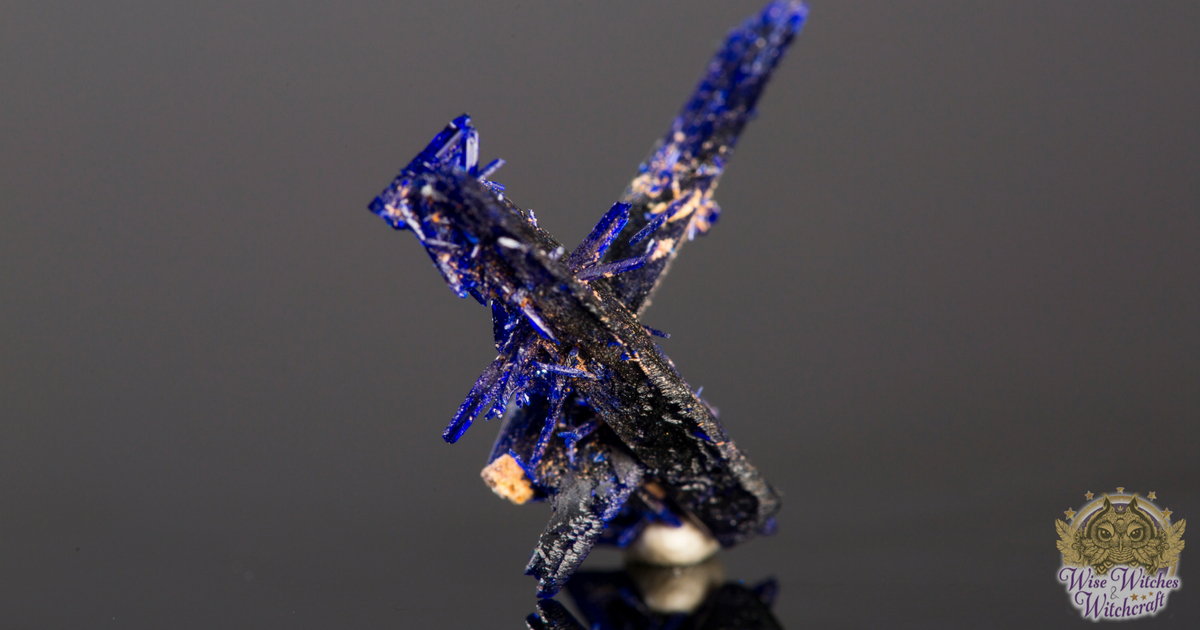 One of the most positive qualities of Azurite is how it helps us hone in on our intuitive nature and psychic awareness. It doesn’t matter if you’re in ritual or taking a crystal bath at home, Azurite makes a great partner in magical efforts. Wearing one around your neck also facilitates clear speech for spoken charms and invocations.

An Azurite pendulum is effective for divination. Holding one during meditation improves our ability to look within honestly at our weaknesses and strengths. Knowing this, we can then carry Azurite for developing those strengths further. If your weakness comes from negativity and self-doubt, an Azurite amulet helps with that too.

For pregnant women or those with children, Azurite is a protective stone and one that improves communication between yourself and a child. For protection, you can wrap the Azurite in a blue cloth and place it on a high shelf in the baby’s room. When pregnant, hold the Azurite in hand when you speak or sing to your belly.

For ritual facilitators who use spiritual music, Azurite sensitizes participants to the sound of drumming, chanting, musical invocations, etc. For those of you who work with divinatory practices which rely on spirits for aid (like the Ouija), keeping an Azurite in your sacred space improves your ability for accurately interpreting the response received.

People involved in on-going magical studies will find Azurite, a good crystal partner. It stimulates your mind and helps in discerning underlying links between various philosophies and belief systems. Azurite also supports commitment, focus, and memory. If you feel you have lost your path and enthusiasm for magic, a sacred stone like Azurite might just have the perfect facilitating energy you need.

Azurite has been sacred to various Gods and Goddesses in history, so you can certainly use it on your altar if you work any of these deities:

Athena: The Greek Goddess of Wisdom & War (also considered among the most complete Goddesses in ancient history).
Isis: The Egyptian Goddess of Life and the Great Goddess of Egyptian tradition.
Juterna: The Roman Goddess of ponds, creeks, and streams.
Sophia: The Greek personification of wisdom.

You can also use Azurite on altars for Divine beings with the sacred color of blue such as Neptune/Poseidon (Greek & Rome), Aditi (Hindu), Nut (Egypt), Inanna (Sumerian), and Tane (Maori). 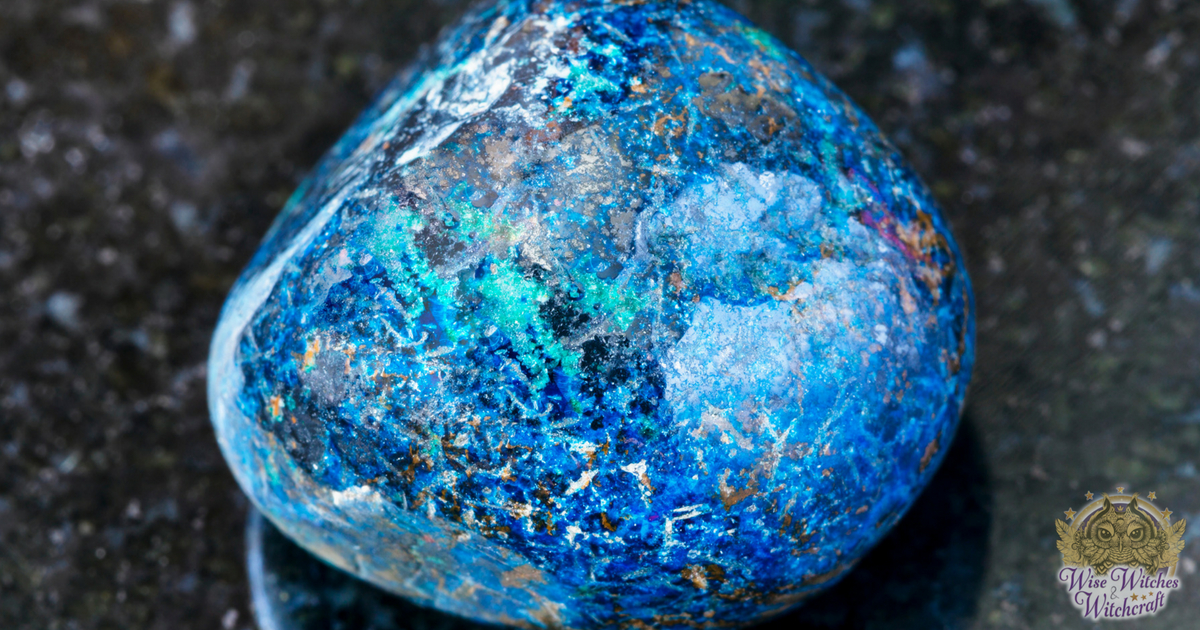 Azurite, sometimes called Chessylite, from the town in France where it’s mined, is known for its deep blue color. The blue is actually thanks to copper in this stone’s composition. Mining for Azurite occurs in the Congo, Mexico, Germany, Australia, Russia, and the UK. It is classified as a carbonate stone with a Hardness Rating of 3.5-4.

Due to heat sensitivity, it is rare to find Azurite in jewelry or of gemstone quality. Usually, it appears on the market in the form of beads or tumbled stones and cabochons. Unlike some other crystals, Azurite has no history of it being dyed or otherwise treated, so you don’t have to worry about that when shopping for your magical supplies.