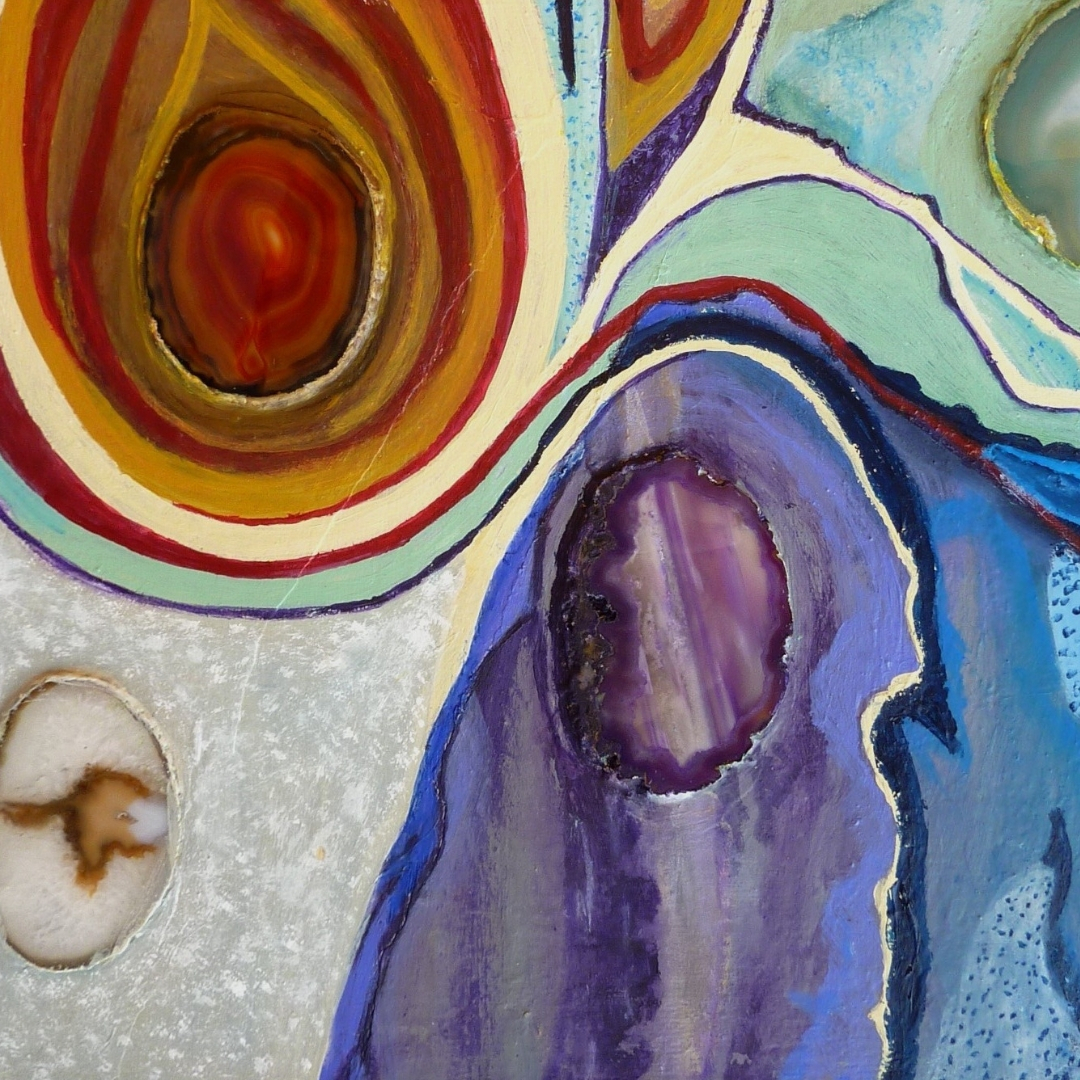 “If thou wear a piece of Tree-Agate upon thy hand, the immortal Gods shall be well pleased with thee. If the same be tied to the horns of thine oxen when ploughing, or about the ploughman’s sturdy arm, wheat-crowned Ceres shall descend from heaven with full lap upon thy furrows.”
– Orpheus

Agate carries the folk name of “Earth Rainbow” because it truly comes in every hue (and varieties thereof). As early as Babylon humans revered Agate as a protective amulet. The Egyptians and Greeks both employed Agate in medical care. The beauty of this sacred stone made it a favorite among stonecutters during the gemstone polishing hay day lasting until the 19th century, and its allure continues. 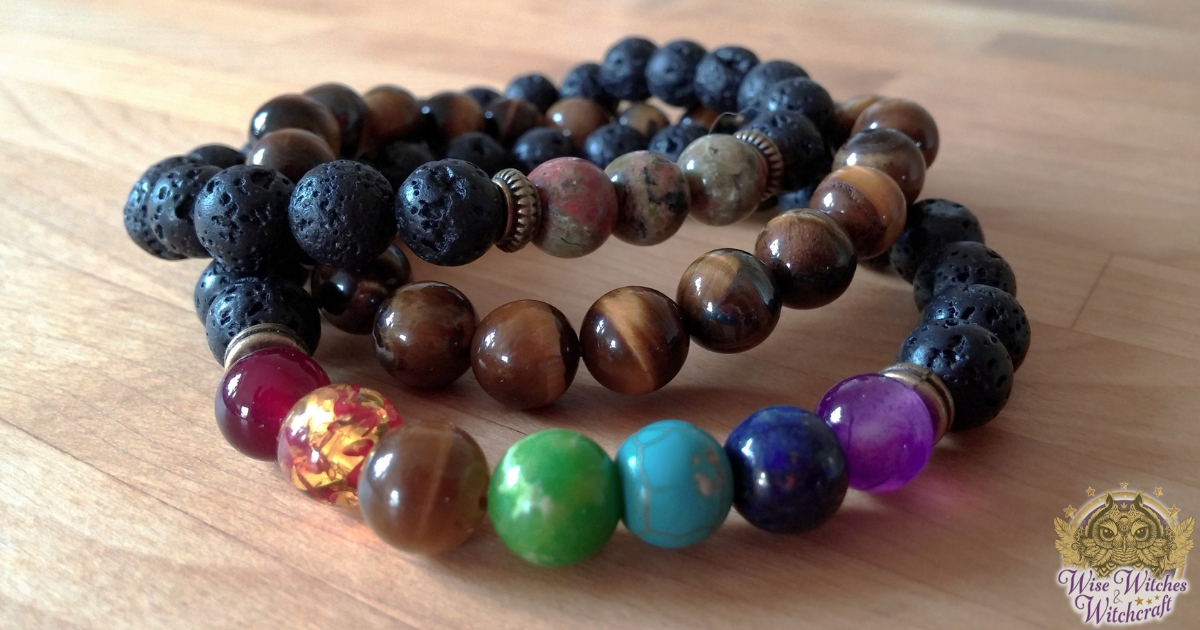 The bands in many agates resemble the shape of an eye. Because of this various cultures including those of Islamic countries trusted it for dispelling the evil eye. Far more than that the meaning and properties of Agate have strong ties to general protection from things as diverse as dehydration and being hit by lightning! Carrying Agate insured the bearer would have persuasive speech (great for merchant travelers) while also keeping them safe from raging storms. Agate also promotes good luck.

A slice of Agate appears very delicate, but in reality, it is strong. This visual balance applies to spiritual matters as well. When you’re working on metering your emotions or thoughts, Agate is a go-to portable charm. People sometimes call Agate the Stone of Wanderers because it helps us embrace change and move forward. People changing residents, taking an adventurous vacation or going on a personal pilgrimage will find Agate a worthy helpmate. 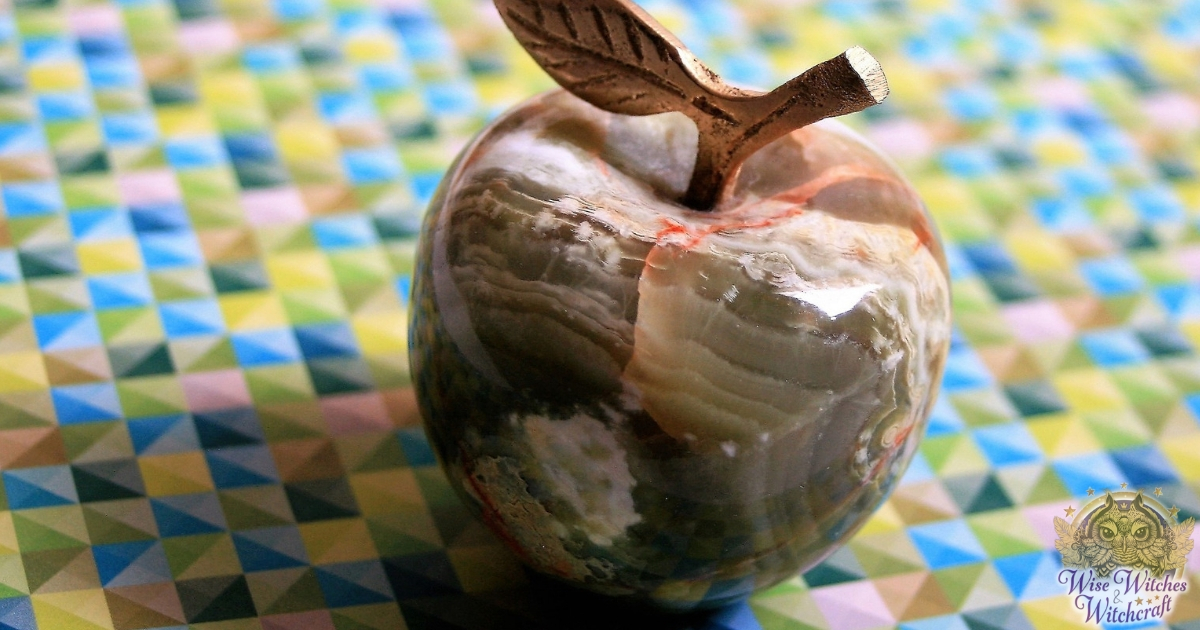 Agate has several stones in its repertoire. Each has a slightly different energetic property and signature. 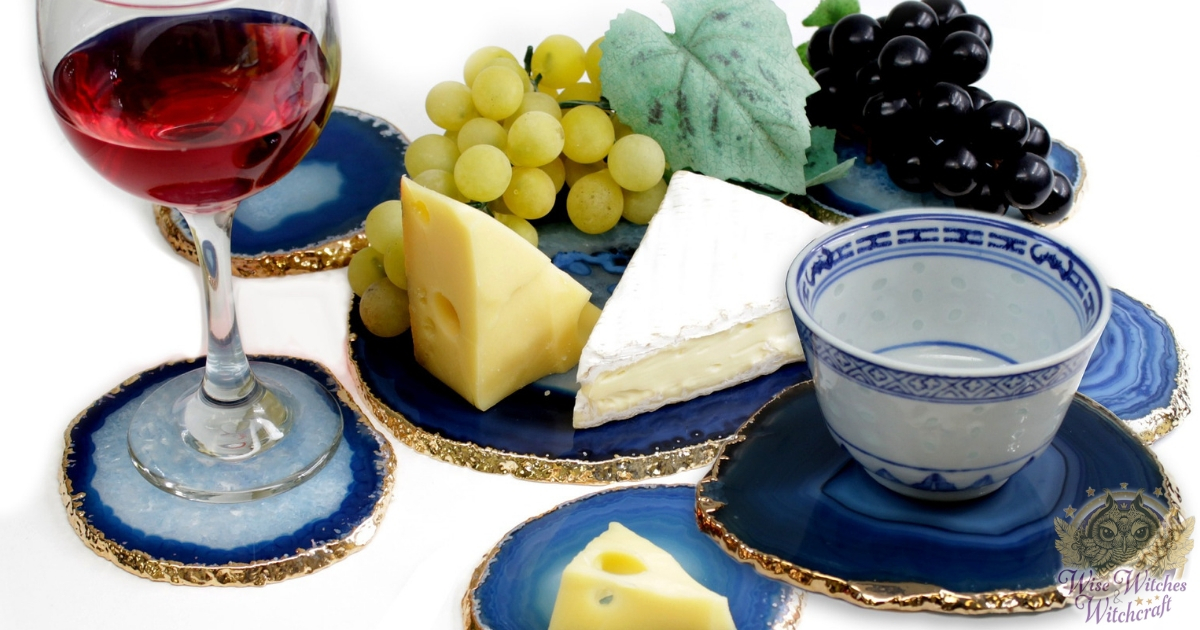 Agate vibrates very gently promoting slow but steady healing. Because Agate has strong connections with Earth energy, it also has a centering and grounding effect. Any time you feel out of focus, Agate readjusts your equilibrium.

Blue Lace Agate opens the throat chakra while moss agate helps you recover from setbacks and puts you back on track mentally for your goals. Purple Sage Agate calms a busy mind so you can relax and sleep better.

Agate supports mental focus, particularly concentration and making sound decisions. As a crystal elixir, it targets digestive, eye and skin issues. Wearing red Agate near your heart is said to promote healthy circulation while also opening your Heart Chakra for giving and receiving love. If you have a headache or fever place a cool Agate on your forehead for some relief.

Meditate with Agate when you need to look within and discern your Truth. This meditation also banishes ire and resentment, while healing bruised emotions. Agate can also help you with self-acceptance and greater self-assurance.

Spiritually Agate improves our awareness of the connections and networks in life. It speaks with the voice of the collective unconscious. Those experiencing chaos and trauma can use Agate for promoting stability.

Please note that the color (or colors) of the Agate can influence its healing power:

There are other colors of Agate or blends thereof that you can ponder for wellbeing. The only caution is that some Agates are dyed for greater vibrancy. These are not useful for healing. 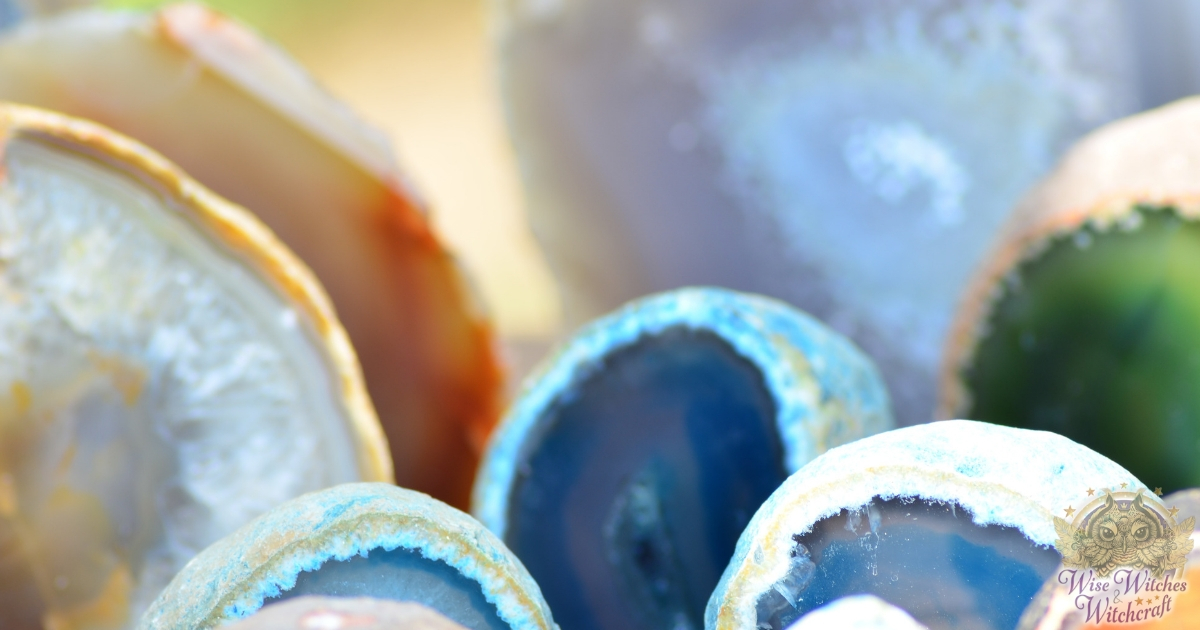 A gift of Agate during pregnancy decreases the influence of hormones for improved happiness and a sense of security with physical changes. Carried as a talisman Agate helps us separate what we NEED from what we WANT and choose accordingly. As an amulet, it will protect you when traveling. Put one in your glove compartment!

Some experts in crystal energy tell us that Agate attracts luck, hospitality, success and pleasant, or even symbolic, dreams. Some of our ancestors placed an Agate somewhere safe on their children to keep them from falling. In the Bible, Agate is said to be the middle stone in the High King’s breastplate.

Practitioners of Feng Shui tell us that Blue Lace Agate is a healing stone, while Green agate refreshes the mind and overall energy. Regarding placement in your home, look to color correspondences. For example, Fire Agate would do well in the Relationship region of your home – Southwest, while a Dendric Agate could reside in the Southeast for promoting prosperity. 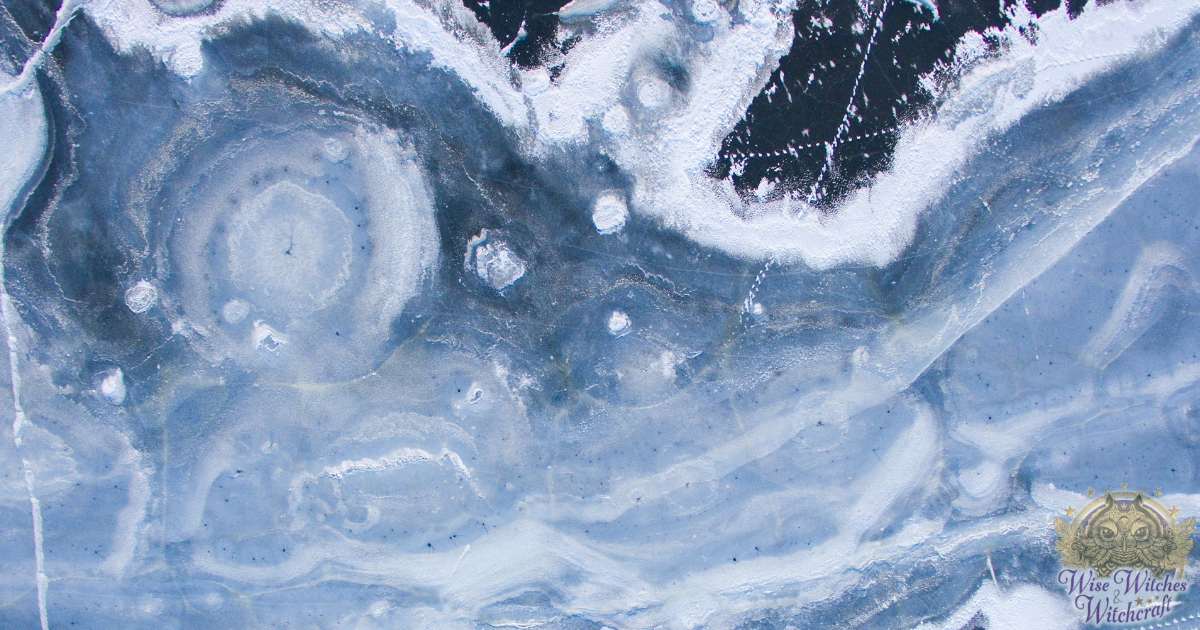 As you might gather, people all over the world have held Agate in special regard for its magical energy. Much of the symbolism and meaning for Agate translates well from our ancestors’ thoughts on this stone. For example, riders carried Agate with them, placing on in the horse’s bridle so his gate was sure. For us, that can be interpreted as attaching one to our vehicles somehow (including bikes and medical scooters).

Another way people used Agate was as a sailor’s stone that kept the seas calm or offered safety in storms. We might apply that as carrying an Agate as an amulet of protection when our lives turn “stormy.” It’s worthy of note that this particular belief appears again and again and seems to date back to ancient Babylon where it was used for safeguarding buildings during rough weather.

In Europe Agate appeared as a New Year’s Gift. The perfect Agate was black on one side and white on the other. This symbolized the past (white) and black (the future/unknown). If one Agate could not be found so patterned two were given instead. Albertus Magnus seemed to agree with such a token saying the Agate made a person strong, powerful and safe in all perils. You could use such a stone for making a choice akin to flipping a coin! Agate is also associated with the Zodiac sign of Gemini, which is an inventive birth sign. Gemini represents the twins who can look at both sides of an issue.

Other magical properties for Agate include: 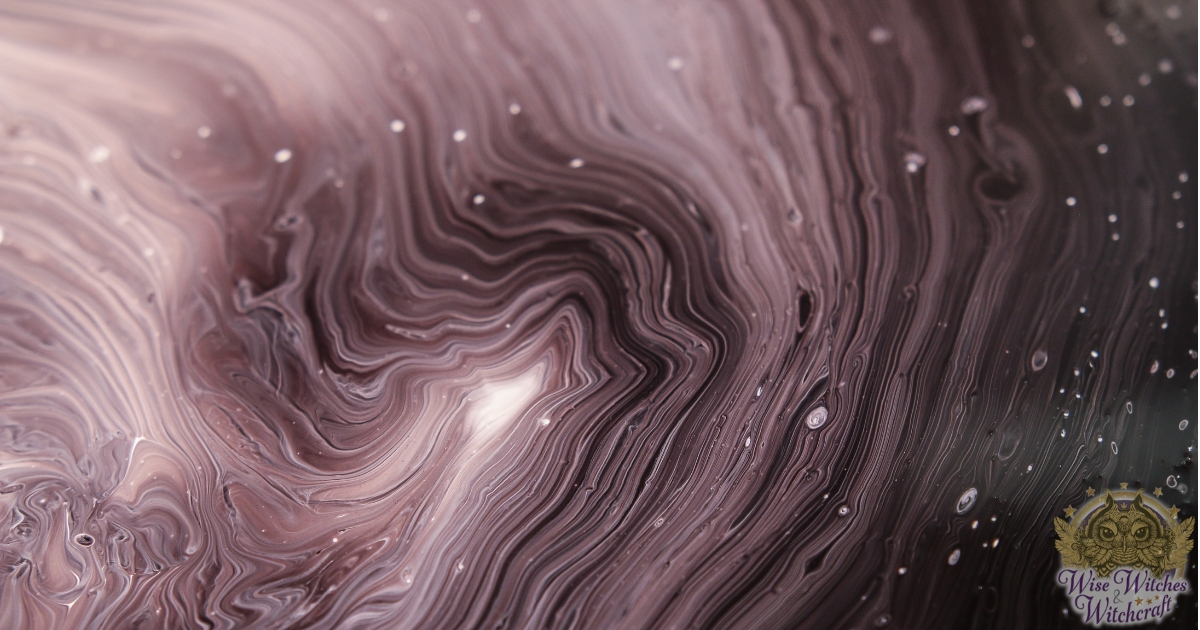 Where other stones get their name from Etymology, Agate’s name is a little simpler. It was first discovered by a philosopher, Theophrastus, in Sicily. The site of that discovery was the river Achates! Thus we have Agate.

Jasper, Chrysoprase, Carnelian, Chrysocolla, and Chrysoprase are all Agates of varying values. Bloodstone is another magical crystal that’s part of this amazing family. Interesting factoid – Blue Lace Agate was first discovered in West Africa by George Swanson. He dubbed Agate the “Gem of Ecology.” It reminded him of the swirling clouds in the blue sky. The lovely color conveys peace and hope to the bearer. 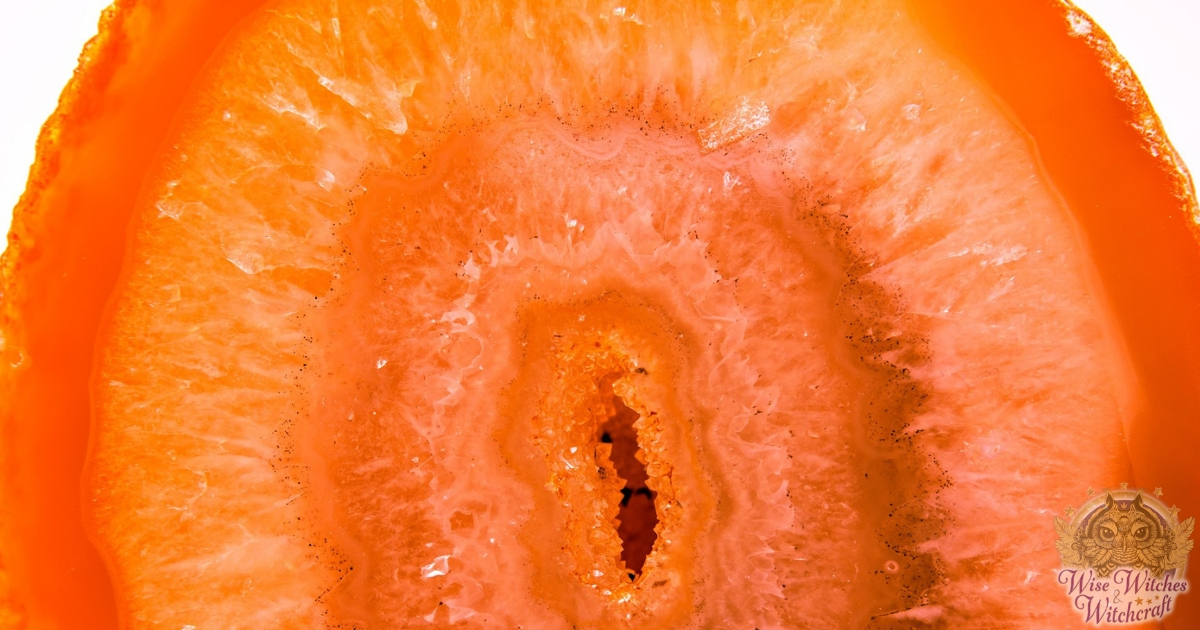 Agate forms from the partnering of silica with groundwater. The colors that appear on each stone comes from water impurities mixing with the layered deposits, which also create the trademark Agate bands.

Agate is part of the Quartz family ranking 7 on the Hardness Scale. These stones come from around the world including India, Brazil, Mexico, Madagascar, and Uruguay. It is considered a common stone and is very affordable.