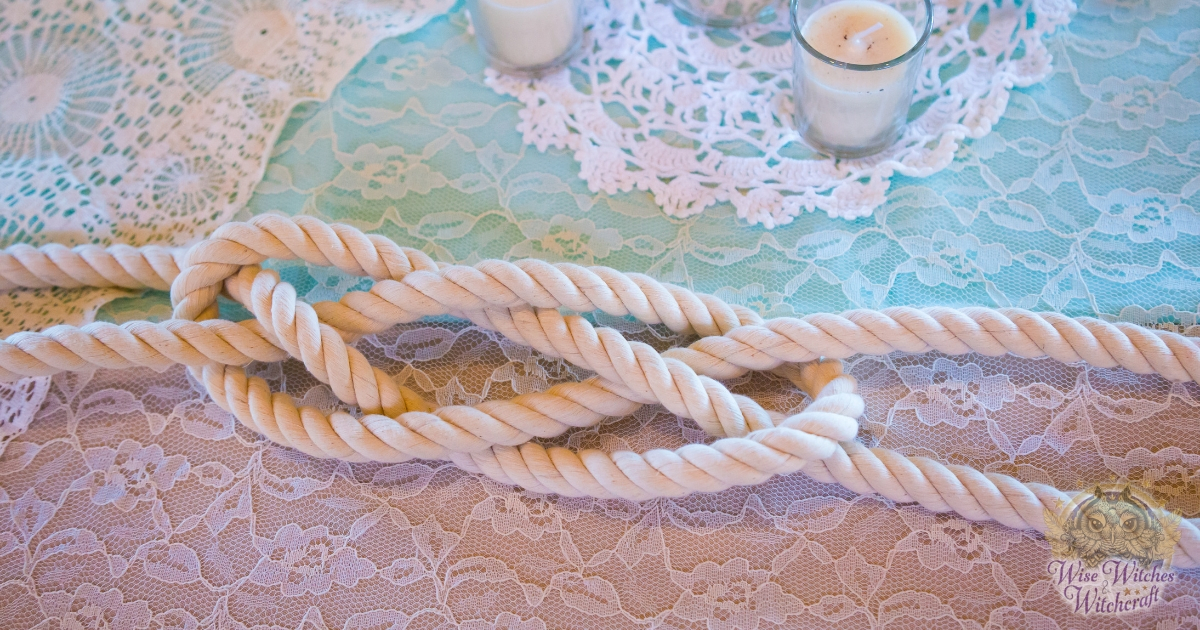 A witch’s ladder (also known as “rope and feathers” or “cord magic” or “knot magic” or “string magic”) is a fetish made from knotted cord or hair, and used in folk magic or witchcraft, normally as a curse but also in any kind of spell-work, meditation or ritual working. Charms are knotted or braided with specific magical intentions into the cord, the intended effect depending on the number of knots and nature of the charms. It is considered a dangerous and secret form of witchcraft.

It typically consists of a rope or cord with (usually) three, nine, thirteen or (in a more modern version) even forty knots. Feathers, bones or other trinkets are braided into the string, and special chants are spoken during the creation process to empower the talisman to do its creator’s bidding. It can be created a section at a time or all at once. At the tying of the last knot, with a final visualization of the object of the work, all the energy is directed into the cord and its knots and is now “stored” in the knots in the cord. The knots of the witch’s ladder enable a witch to concentrate on repetitive chants or incantation without having to keep count (similar to Christian Rosary beads), and enable the witch to focus will and energy on the desired goal. 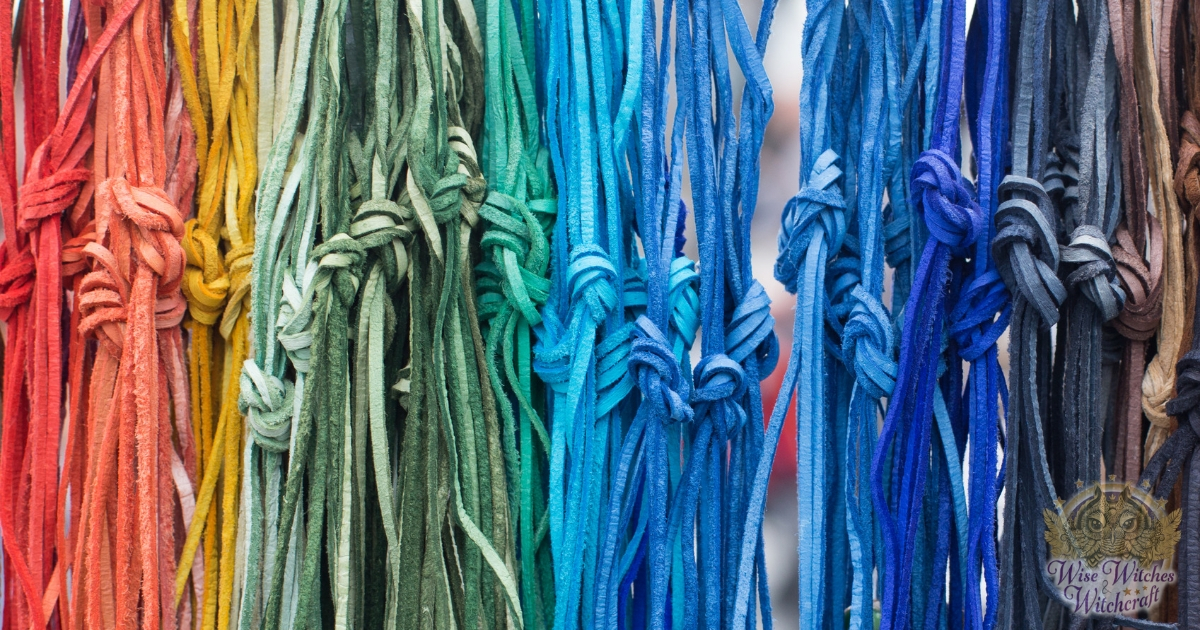 It was believed that witches of old could cast a death spell over a person by tying the knots and then hiding the cord, and the only way to undo the spell was to find the cord and untie each knot. A well-documented example of a witch’s ladder was found in a home in Wellington, Somerset, England in the 19th Century (in a room obviously set up to be a place of practice for witches). It consisted of a piece of rope about 5 feet long and half an inch in thickness, composed of three strands with a loop at one end. Inserted into the rope crossways, were a number of male goose feathers that had been twisted in at the time the rope was made. Some old women of the area, when questioned about the rope, indicated that that such items were used for placing curses, and that a common variant was to use a candle or an onion stuck with pins.

Charles Leland reported that his investigations into Italian witchcraft had uncovered a similar form, known there as a “witch’s garland”, constructed of a cord with black hen feathers knotted into it and hairs of the victim braided into it. A curse was uttered as each knot was tied in, and the item was placed in or under the victim’s bed, often accompanied by an image of a hen or cock (made of cotton or something similar) upon which a cross of black pins was pinned. The curse could only be lifted by finding the hen and the garland, and throwing the whole lot into running water, after which the victim must be taken into a church while a baptism was being carried out, where they had to repeat a certain counter-spell and then bathe in holy water. 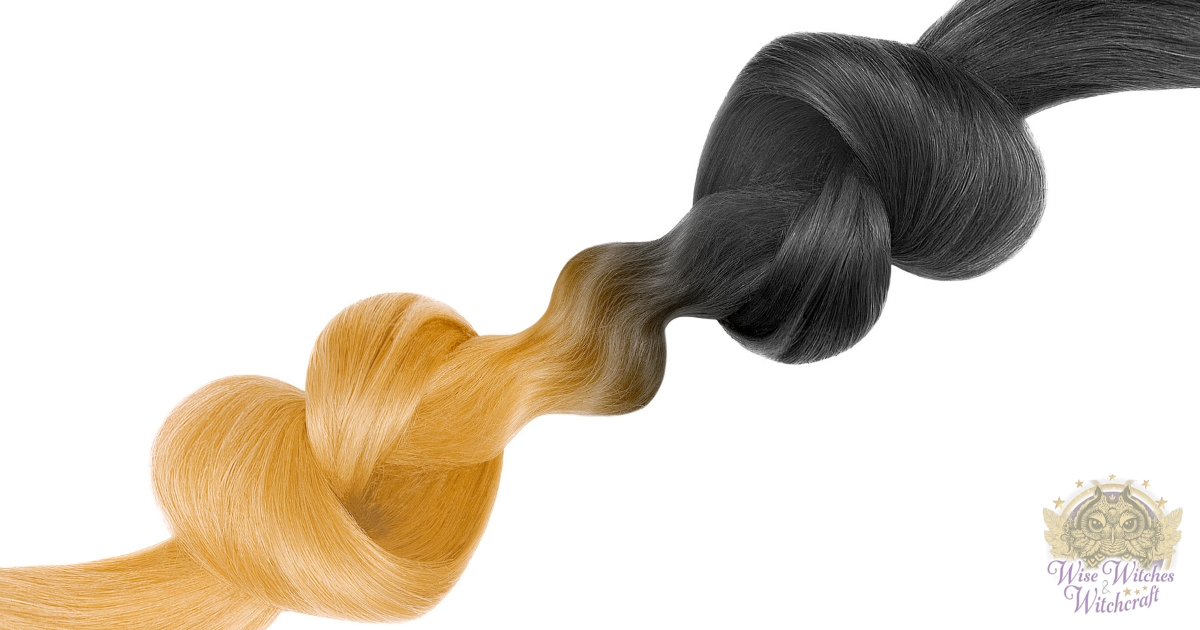 Modern Wiccans and Neopagans use witch’s ladders primarily in healing, binding and wish-granting rituals. They can also be used to “bind the thirteen moons of the year” (to allow the witch to better work weather and nature magic), and to open the doorway to the faery realm. Knot spells may be created for such diverse purposes as reducing pain, binding love, ensuring safe travel or creating a peaceful environment in the home. The string or cord can be made out of almost any material, but natural fibres (such as hair, wool, hemp and cotton) are preferred. Although ladders are often created as part of a specific spell, many Wiccans may keep a personal ladder, and use the knots or beads to keep track of repetitions in a spell or prayer, similar to Rosary beads.