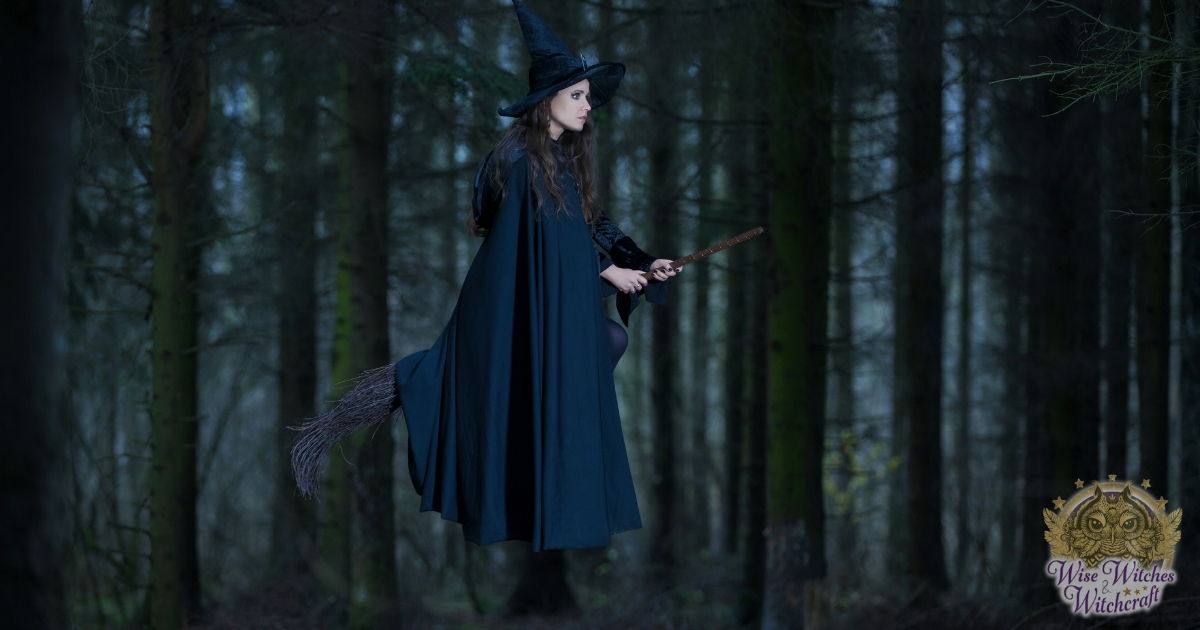 A besom broom is the kind of broom traditionally associated with witches, and is one of the tools commonly used in the practice of modern Wicca. It is a traditionally-constructed broom made of a bundle of twigs tied to a central stouter wooden pole.

In the Middle Ages, witches would prepare a “flying ointment” (also known as “green ointment”) to aid them in their journey, the recipes for which usually had a base of either Belladonna (Nightshade) or Mandragora, both highly psychoactive drugs producing visions and encouraging astral projection, mixed with clove oil (which is known best for its anaesthetic properties). Thus, the generally accepted theory about the origins of witches flying on brooms is based in a ritual involving a psychoactive drug trip: as the ointment was rubbed all over the body using the broom (particularly on the forehead, wrists, hands, feet, under the arms or between the legs), it gave a sensation of flying. The witches mounted broomsticks and would leap around the fields, smeared with the flying ointment, to “teach” the crops how high to grow, and the ointment would give them imaginary “trips” and the feeling of having flown distances. 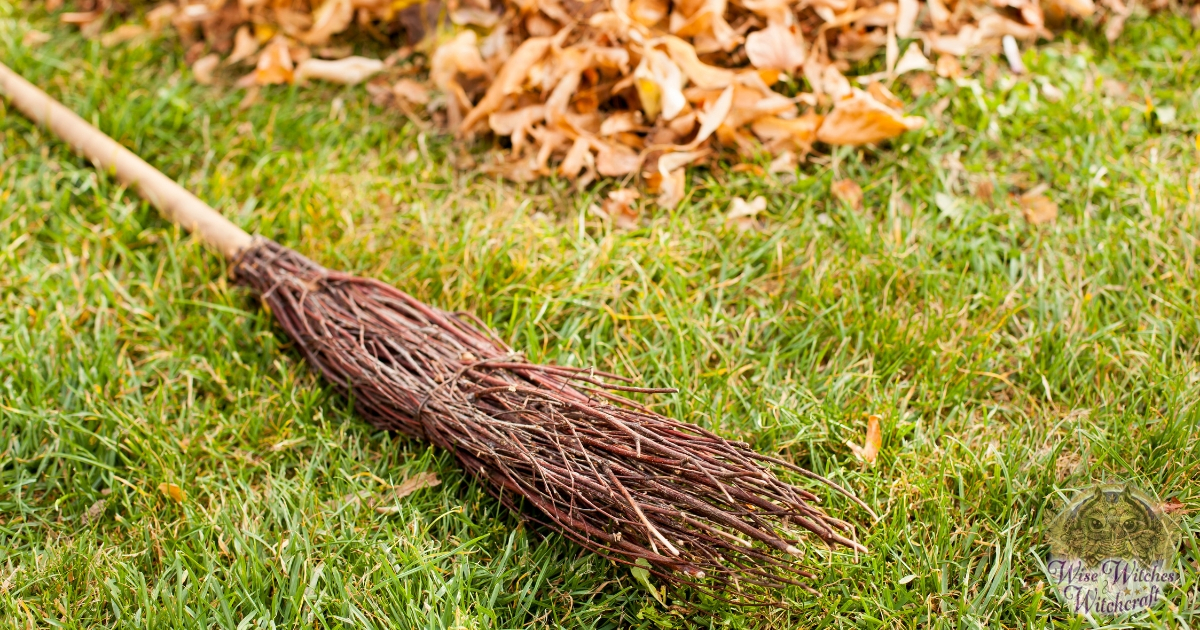 Despite the association with women, the first known case of claiming to have flown on a broomstick was actually confessed by a French male witch, Guillaume Adeline, in 1453, although there are prior records of witches flying on sticks or poles or similar objects. French and German illustrations from as early as the 15th Century show witches flying on broomsticks, or sometimes on pitchforks. Warlocks, the male equivalent of witches (usually in the pejorative sense of Europe‘s Middle Ages), are historically often described as riding pitchforks instead of the broomsticks of witches.

A modern Wiccan besom generally consists of an ash or hazel stave handle with bristles made from birch twigs (although the bristles can also be made of many other materials, including straw, herbs or other twigs), tied on using thin pieces of willow wood, all traditional and sacred woods. It is generally used to purify and protect, and to ritually cleanse a circle-casting area before magic is performed by symbolically sweeping away negative energies and astral build up. The High Priestess or High Priest walks clockwise, tracing the ritual circle and sweeping with the broom, usually a few inches off the ground.

The besom is sometimes thought of as masculine in nature, due to its phallic shape and symbolism, but its components are of both masculine and feminine orientation (the handle, an ash stave, is masculine in nature, while the birch used for the bristles is thought of as feminine in nature). The besom is also an important part of Wiccan handfasting (marriage) ceremonies in some traditions, and the couple may jump over the besom (or over a small bonfire) during the ceremony. 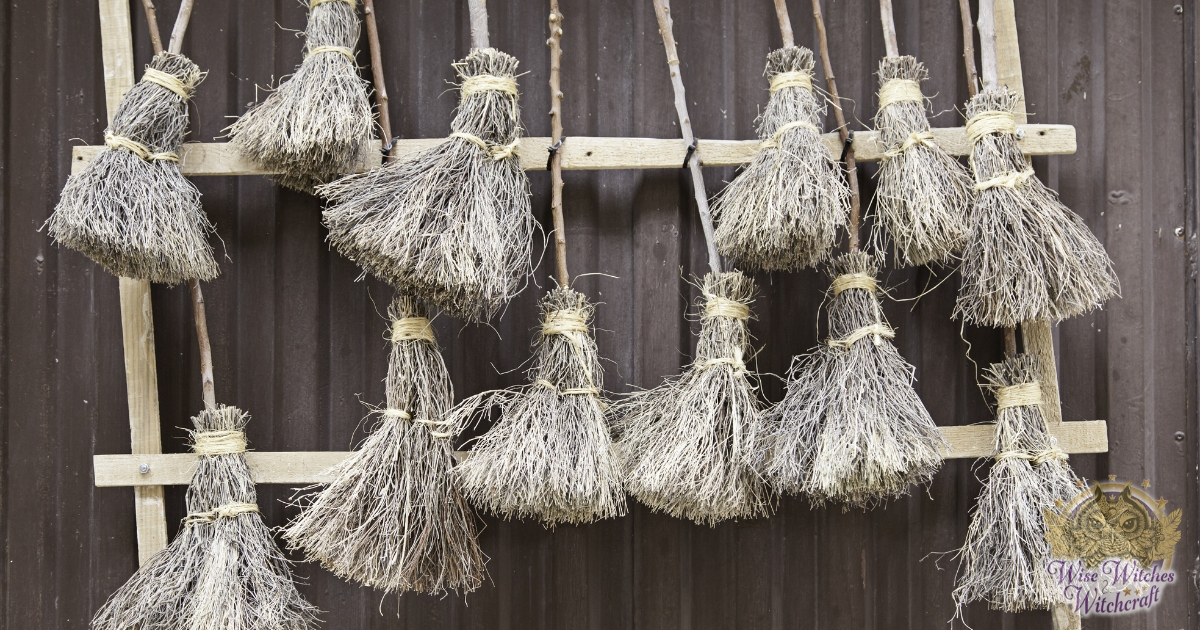 “Jumping the broom”, as part of an unofficial or non-Church marriage ceremony, is also a 19th Century African-American tradition that has stood the test of time in America and seems to be rising in popularity again after a major decline due to the association of slavery. It was possibly based on an old Roma tradition, and was also practiced in medieval England (hence the phrase “married over the besom”).

An upward pointed besom (bristles up), especially over or near a doorway, is also supposed to help protect the house from evil spirits or negative energies and, in the same way, a broom is sometimes laid at the opening of some covens‘ rossets. A broom was also traditionally placed under a bed or a pillow to protect the sleeper.