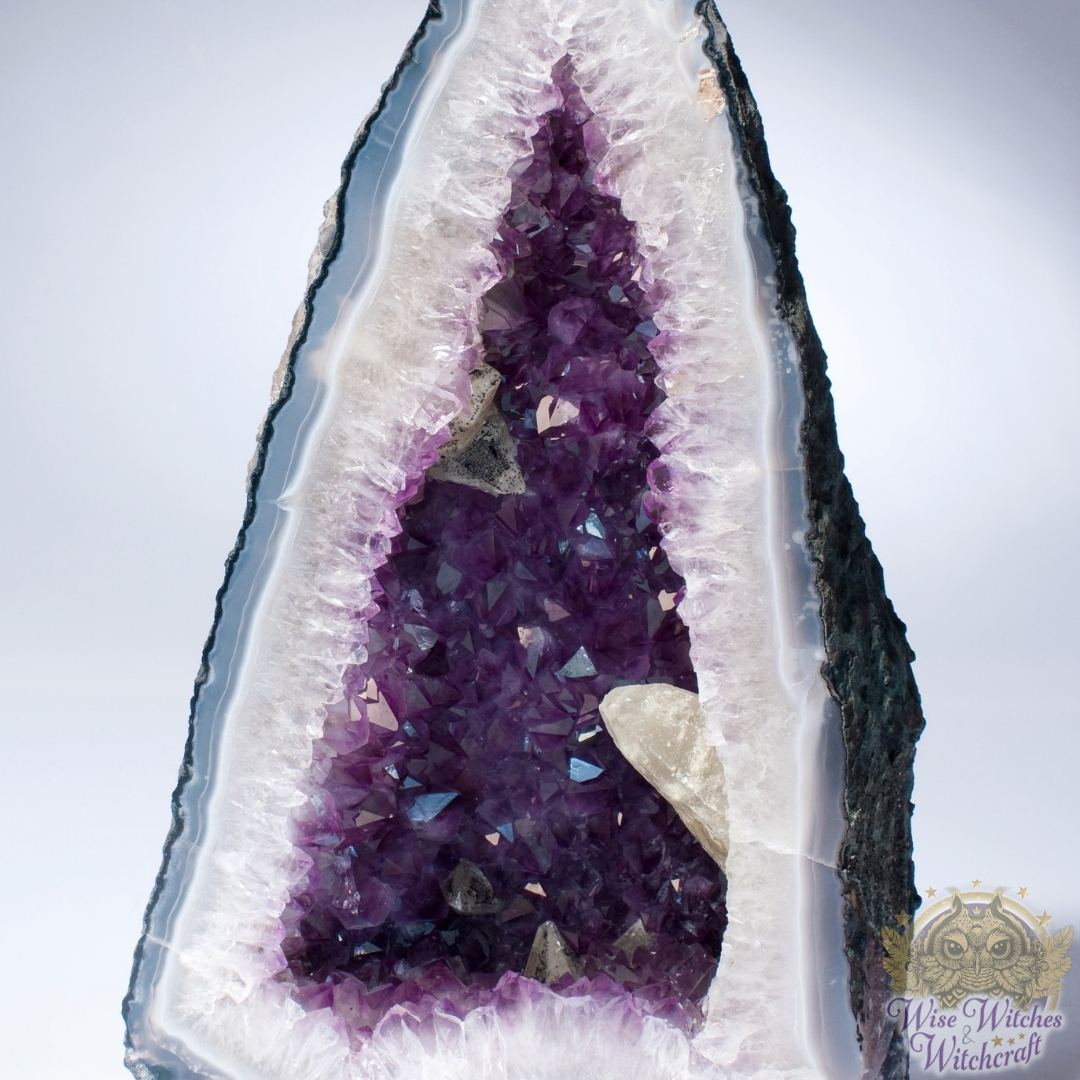 “There is in them a softer fire than the ruby, there is the brilliant purple of the amethyst, and the sea green of the emerald – all shining together in incredible union. Some by their splendor rival the colors of the painters, others the flame of burning Sulphur or of fire quickened by oil.”
– Pliny the Elder

Amethyst is among the most popular magical stones for spell components, altars and healing alongside crystals like Quartz, Citrine, Moonstone. Fluorite, Tourmaline, and Citrine. Amethyst is actually a variety of Quartz that’s strongly recommended for addition to your personal Witch’s toolkit. The meaning and symbolism for Amethyst make it very adaptable to nearly any spiritual practice. Better still, it’s not expensive. In choosing your crystal, the deeper purples are those that resonate with your Higher Self and intuitive energies. As time goes on, try combining Amethyst with other sacred stones and see what wonders you create. 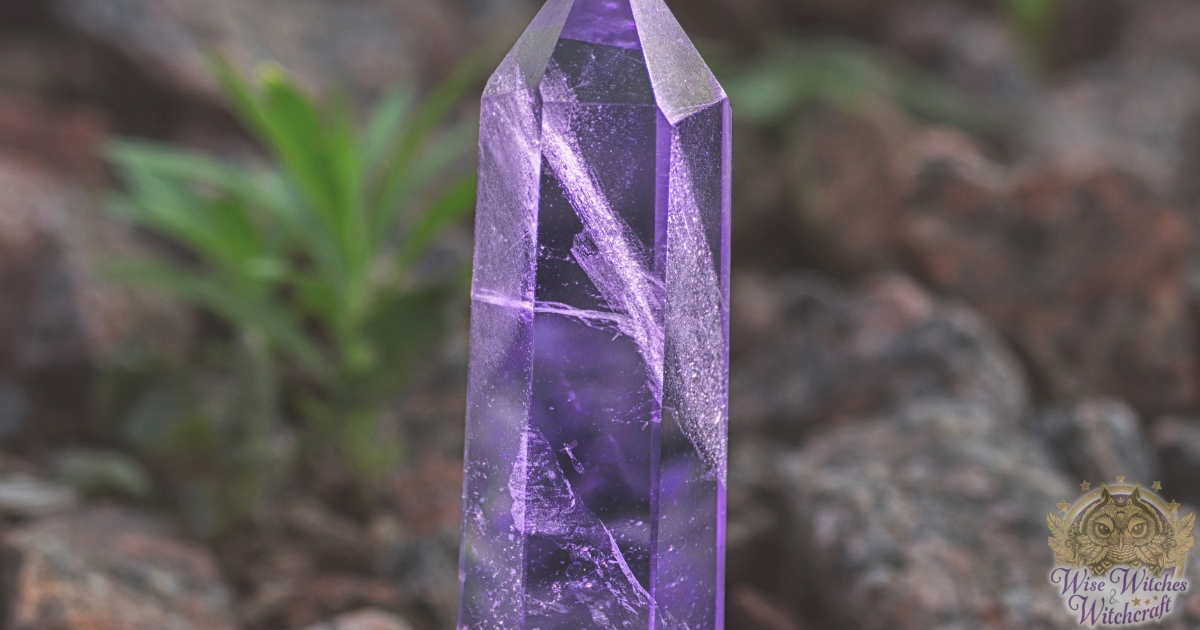 The ancient Egyptians ascribed Amethyst to the zodiac sign of the Goat. Since Goats were known to wreak havoc on vineyards, they aptly used Amethyst as an antidote for wine. Egyptian soldiers wore Amethyst in a battle to retain their courage. Metaphysically, this equates to protection. Bravery and also perhaps self-control.

This theme of regulation and mindfulness seems to continue in other settings too. For example, In the Bible, Amethyst was one of the twelve stones that decorated the High Priest’s breastplate. It stood for the Tribe of Dan among the Tribes of Israel. Later, Amethyst gained associations with the Apostle Matthias, who replaced Judas after Jesus ascended. This sacred stone also has ties to Adnachiel, a guardian angel of truth, wisdom, and revelations. The Catholic clergy used Amethyst as part of their traditional clothing, specifically a Bishop’s ring, representing piety and righteous living (no wine allowed!).

Amethyst has been called by some the “Jewel of the Gods.” It was suited to temple offerings as it was once as expensive as emeralds or rubies. It is ruled by Jupiter and associated with the month of February and the weekday, Wednesday. Hebrews named Amethyst ahlamah. This translates as dream and may be why Amethyst became a trusted visionary stone.

Leonardo da Vinci wrote about Amethyst saying it rids the bearer of evil thoughts and improves mental keenness: A great thinker with a similarly great insight into the metaphysical associations for Amethyst. 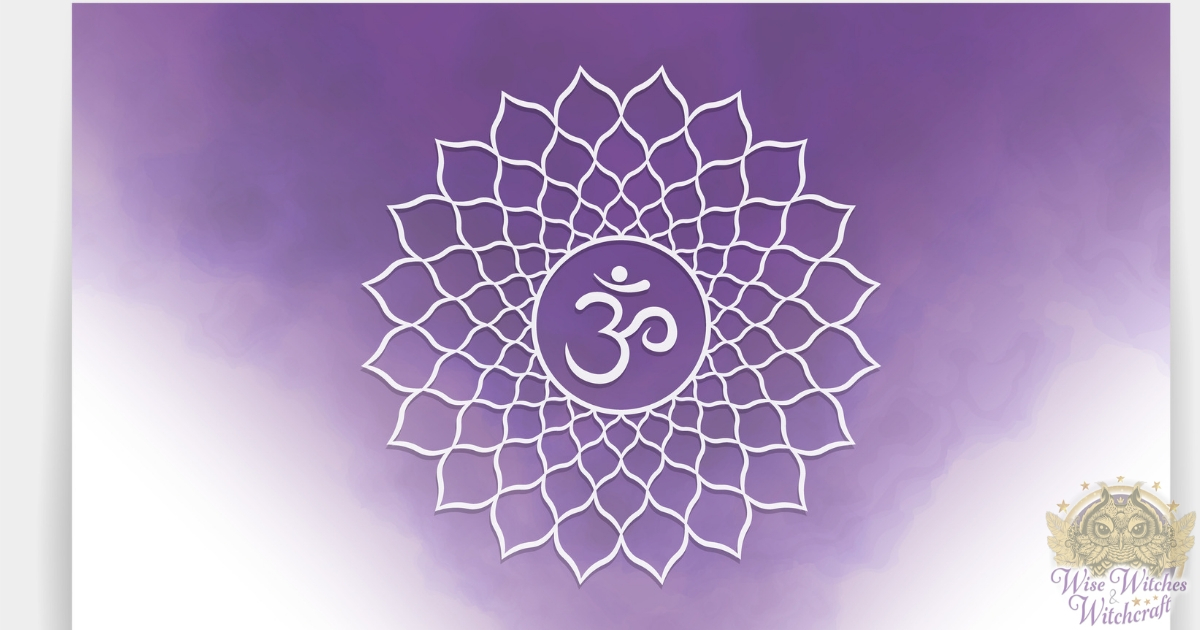 Amethyst often appears in healer’s kits. Folk remedies talk about moistening amethyst with saliva then rubbing it on pimples to make them disappear. It also appeared in spells intent on improving one’s beauty. Chinese remedies recommended Amethyst for stomach pains and nightmares. Here it is considered a detoxifying stone much as the Feng Shui concept.

Wearing blessed Amethyst jewelry near one’s head is said to deter a nasty headache while also helping keep your mind clear. Combined with a rosemary potion as a crystal elixir, it improves memory. People who work in stressful situations should carry Amethyst (like a worry stone) or have some in their personal space. If you have trouble sleeping, put an amethyst under your pillow. This may also prove useful to people prone to depression or addictive behaviors. 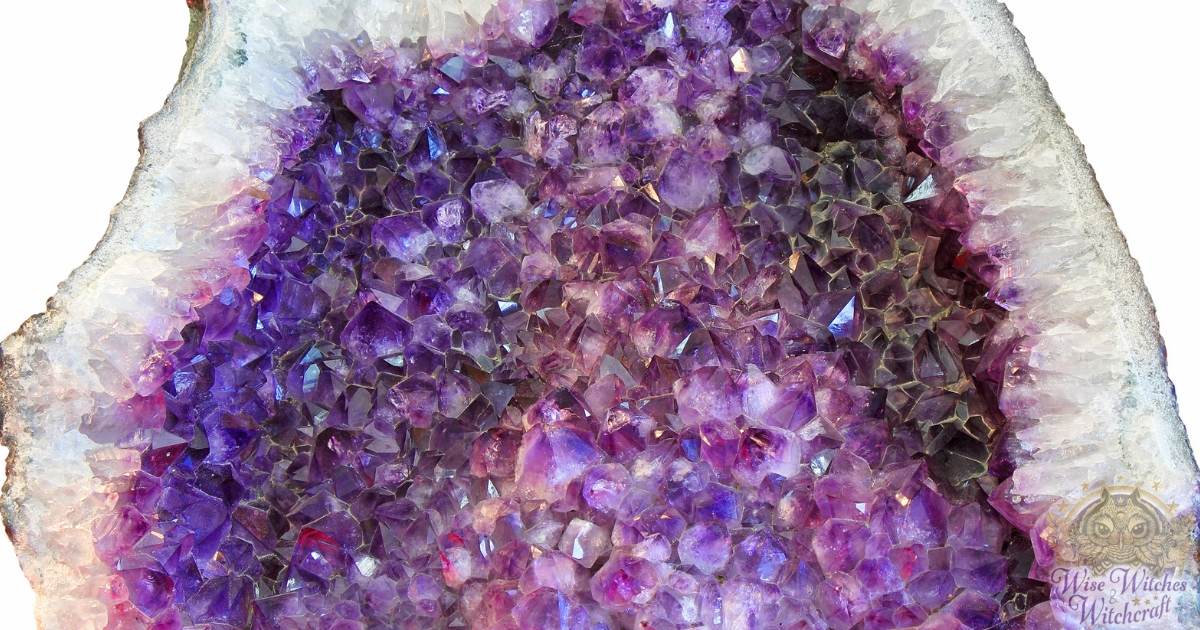 The idea that Amethyst keeps you from getting drunk began with a myth. Bacchus (the God of Wine) was being his notably randy self and perusing a maiden by the name of Amethyste. She wanted nothing of him, wishing to remain chaste. She prayed to Diana, who turned her into a white stone. Upon seeing this Bacchus poured his wine on the stone remorsefully, making it forever purple. Here are some other global tidbits about Amethyst: 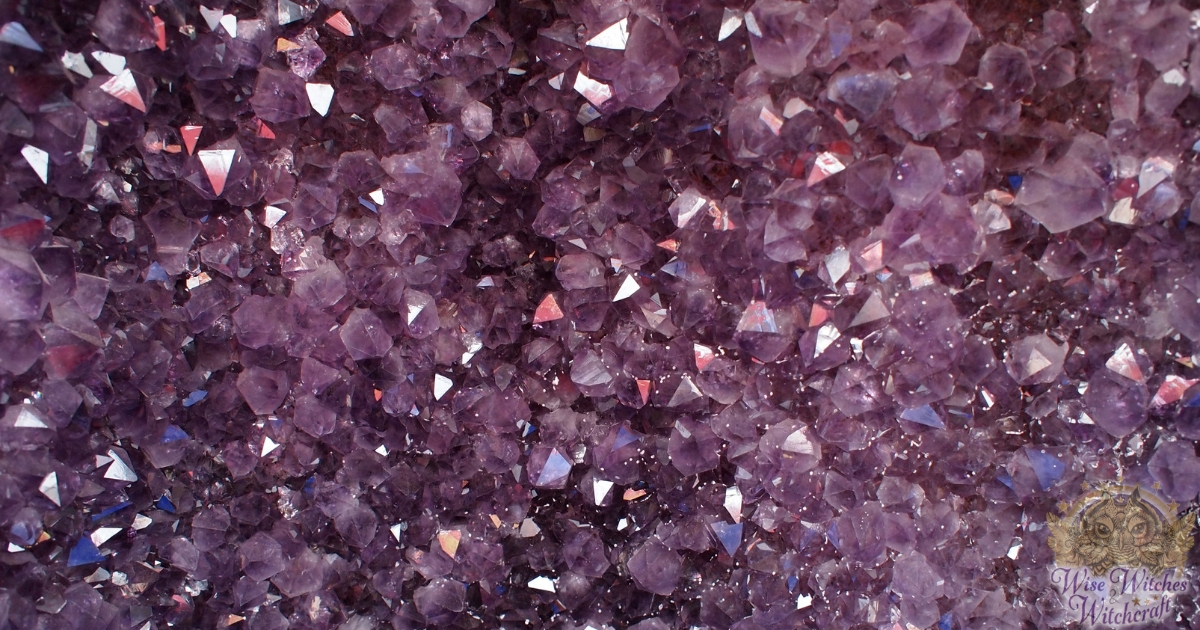 Spiritually speaking Amethyst has nearly as many uses as clear Quartz. Carrying it helps a person deter negative purposes, improve intelligence, provide business savvy, protect a person from injury, improve the results of a hunt and even safeguard against disease (whew). Overall, it appears our ancestors considered Amethyst a stone that encourages the best in people – pure intent, kindness, and thoughtfulness.

Amethyst Energy Signature: Witches and sensitives feel that meditating with Amethyst can improve prophetic insights. Amethyst vibrates with an impressive spiritual understanding that every human needs to understand their soul’s purpose in this incarnation. When ritually exchanged between people with honest intent it resolves arguments.

Amethyst characteristics include cleansing on all levels of our being. It’s a stone of balance and foundations. As a portable charm it brings out light-heartedness and a hardy sense of humor. Other key attributes for Amethyst are:

In reading this list, it’s easy to see that the ancients gave us a lot of meanings, symbolism and uses for Amethyst. Because it comes in various sizes, the smaller pieces make excellent choices for charms, amulets, and talismans for example:

Obviously, there are numerous other potential charms a Witch can consider based, not only on the history and lore of Amethyst but your own intuitive nature. Any time we talk about spell components, ritual tools, etc., it’s always important to remember that how YOU feel about Amethyst, and applying it accordingly, is the key to successful workings.

Amulet as an Energy Vessel: Because Amethyst is a form of Quartz, it holds energy beautifully. You can actually store spells in it, having an activating word to release that magic whenever you feel the need. One way of achieving this is through speaking the spell into the stone a symbolic number of times. Then charge the stone spirit with a spoken word that you will use for guiding the magic outward toward your goal. An example here is having a stone-charged for protection in travel. The next time you are heading out by car, airplane or train keep it with you. If something seems to be going awry, release your spell. What should you use for activating words? How about the word Now!?

Amethyst for Directing Energy: Amethyst crystals generally have a point unless they’ve been tumbled or cut. One that fits tidily in your hand with the point exposed can act as a pointer on the Universal chalkboard, so to speak. Just as you might use a wand, channel your energy through the crystal as you move it (like when you outline a Sacred Circle).

Magical Reminder about Crystal Cleansing: Remember to cleanse your crystal before using it. If you have placed Amethyst in a room intending to absorb negativity, it’s a good idea to give it a good cleaning once a month (more if the energies are really nasty). Similarly, if you have used your Amethyst as an energy vessel already, purify it before re-charging. These steps ensure that there are no stray energies attached to your stone that might skew future uses. 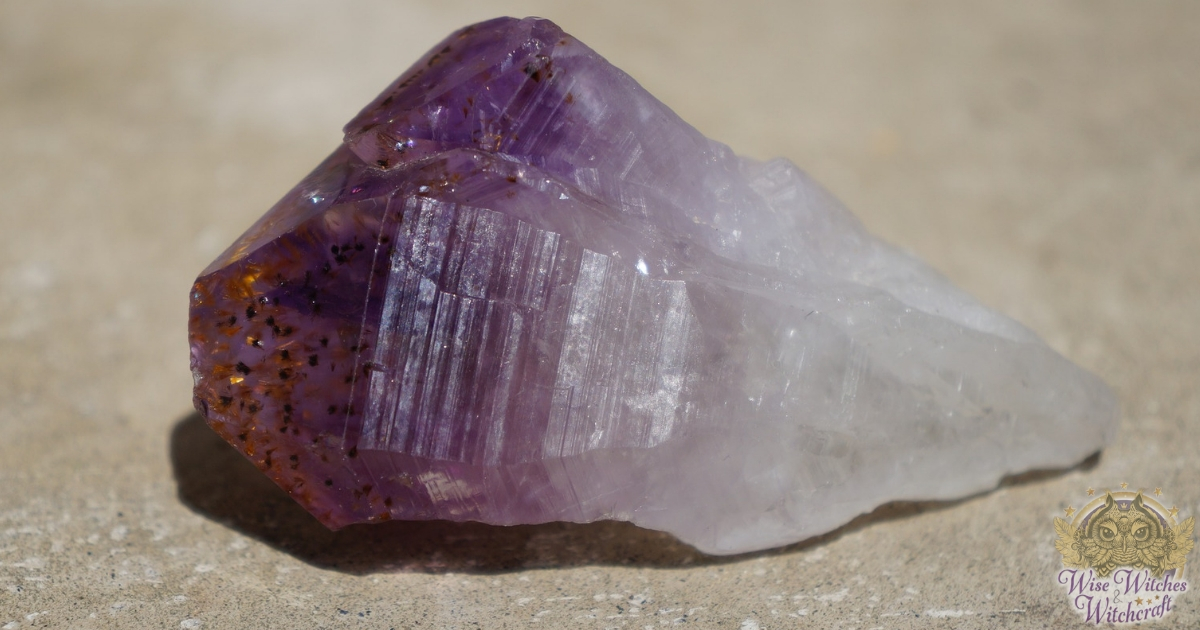 It takes its name from a Greek word that means not drunken. This designation reflected common beliefs that Amethyst worn, placed in a cup, or fashioned into a goblet would not only keep someone from being overwhelmed by the spirits but also kept them safe from poison. The ancient Pagans knew how to throw a party! 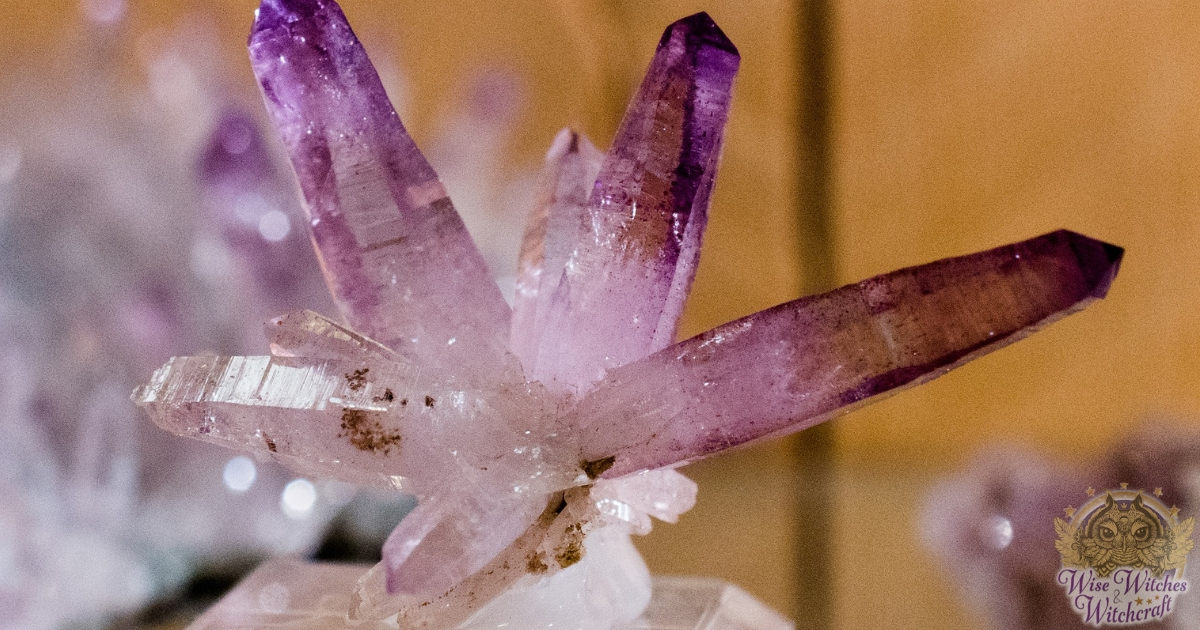 Amethyst has a hardness of 7 on the Mohs scale. It grows in a six-sided shape (six represents harmony and caring in Numerology). The classic purple color for Amethyst comes from iron impurities in the Quartz. While we think of Amethyst only as being purple it can have secondary hues – pink, red and blue (pink being the color of friendship, red – love and energy and blue – peace and happiness).

Warning our lovely crystal may pale if you leave it in the sun frequently, turning slightly yellow or brown (some Citrine sold today is actually burnt Amethyst). Additionally, there is synthetic Amethyst, Quartz that’s treated by X-rays after being dipped in a ferric blend which is likely unhelpful from a magical perspective. Your workings are much better off with a natural stone.