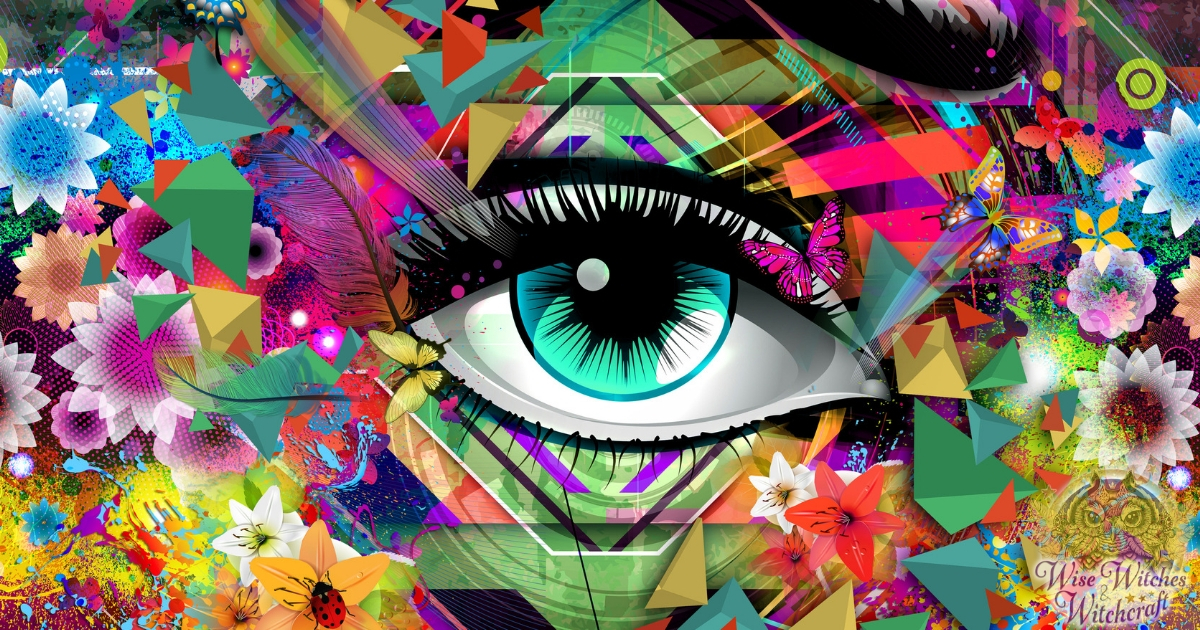 “We look into mirrors but we only see the effects of our times on us−not our effects on others.”
– Pearl Bailey

Mirrors are common implements in many civilizations. Their symbolic value is so strong that we discover a variety of holidays, festivals, ceremonies, and rituals integrating this tool as part of the related activities for that event. These uses can give you great ideas for mirror magic. It might also open doors for creating similar person events for a Solitary Witch, or as part of your coven.

You might, for example, use the date of a mirror-oriented festival for blessing your new magick mirror. Or time a special mirror spell with a date known to support those energies. The only caution is treating other people’s traditions with respect and gentleness. Come to know the cultural context in which an event took place. Study a bit so you understand the full meaning of what people did and, more important, why.

From that foundation, you can use or adapt the customs far more responsibly. 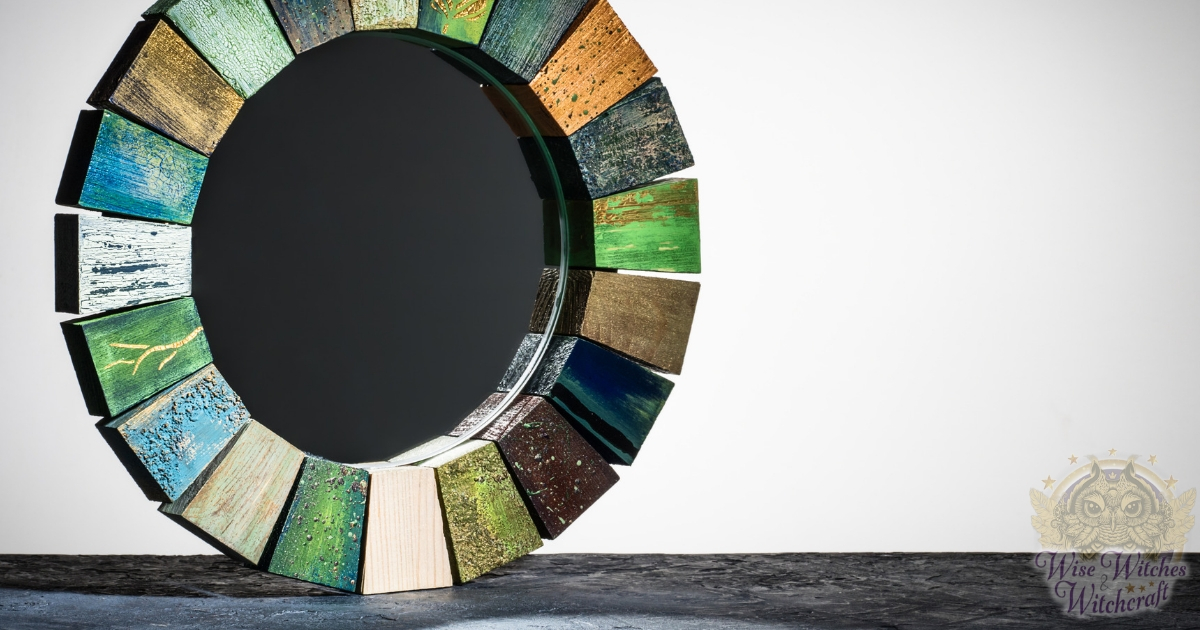 Corresponds to the Western Winter Solstice: Those celebrating Children’s Day begin festivities by focusing rays of light with a mirror, starting the central fire, and honoring the sun. Celebrants place dolls in a specially built shrine with an indwelling king and queen. As representatives of heaven, the images receive prayers along with offerings. Traditional gifts correspond to each of the senses: a cloth ribbon (touch), fruit or sweets (taste), saffron water (smell), a conch or musical instrument (sound), and, last but not least, a small mirror (sight). As with its Western counterpart, this holiday includes feasting, gifts, and general merriment. 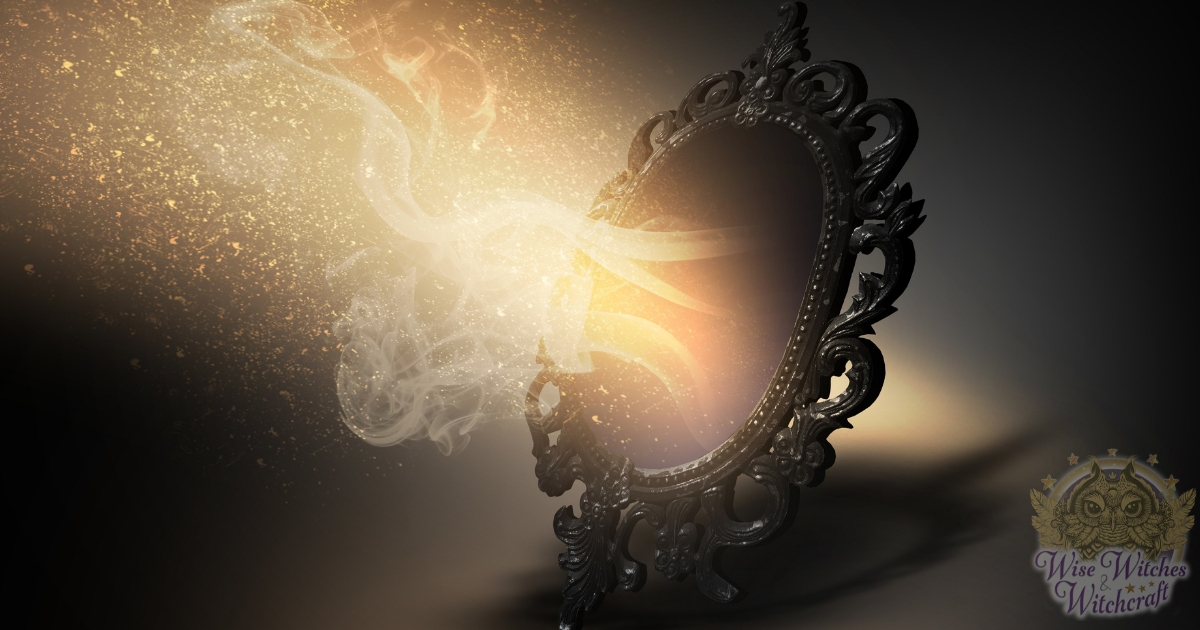 The basic aim of this celebration is propitiating Shakti, the feminine aspect of the divine who bestows wealth, prosperity, and knowledge (both sacred and secular) on those whom she favors. On the tenth day of this festival, images of the Goddess move to an area where her reflection blesses a large vessel of water: This is called mirror immersion, after which the water in the bowl is used anoint people, blessing them with long life. The remainder ritually washes the image, preparing the lady for her trip home. 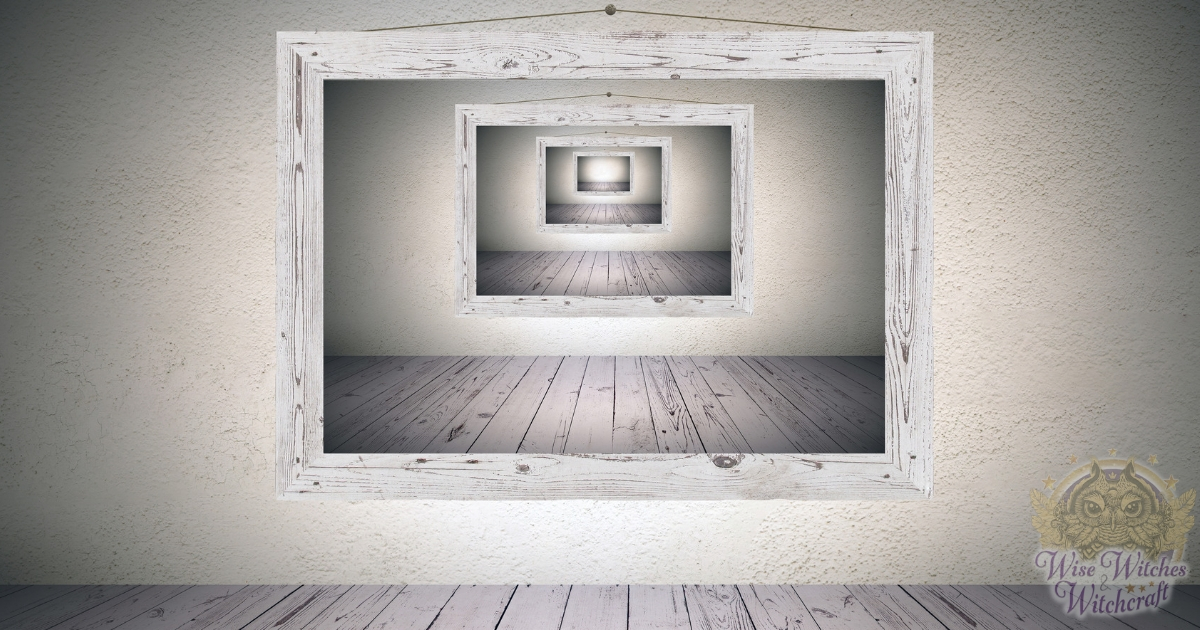 Celebrated at the Autumn Equinox, this was a time for the faithful to deposit sacred objects at the feet of Demeter. Women carried baskets filled with the Goddess’s belongings, including a comb, a mirror, a snake figure, wheat, and barley, for presenting to her. The women then bathed in the sea, put on new clothing, and poured out libations to the Earth. Finally, all gathered and celebrated in their best finery, dancing and shouting “Hail, Demeter!”

On this ancient turning of the New Year (October 31), divination was common practice. One custom detailed walking backward into a darkened room while looking into a mirror and eating an apple. If done correctly, you would see our future mate standing behind you in the reflection.

Initiations typically take place on June 22 or 24. During this time, those attending (a number of people that come in multiples of three) seek after the wisdom of the fern root: This is akin to communing with a plant spirit (warning this has poisonous qualities). Attendees are told to wear a mirror for protection. As they travel the veil and reach the door of the underworld, directing the mirror toward the spirit that abides there protects them and forces the spirit to leave that door open for their safe return. 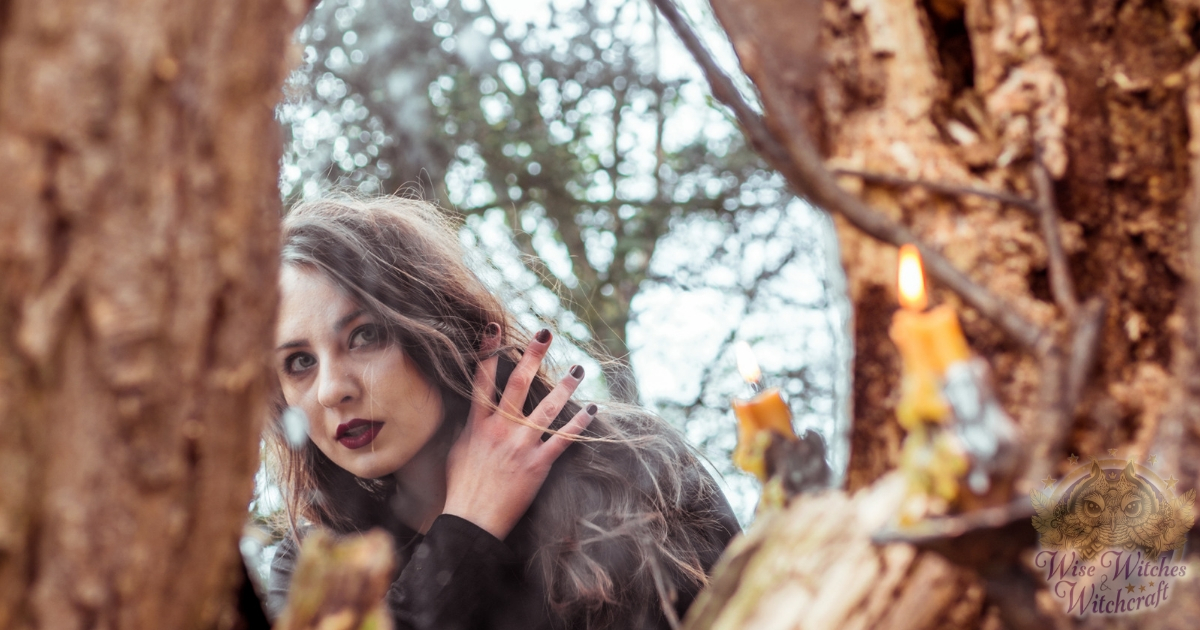 Just before sunset when a groom enters the home of his wife-to-be for the ceremony, the first thing he should see is the reflection of his bride in a mirror. The groom provides the mirror beforehand. Called ayeneh-ye bakht, or The Mirror of Fate, it sits between two candelabra, representing the bride and groom. These two things together, the mirror and candles, symbolize fidelity, purity, and love for the couple. In front of the mirror, the Sofreh-ye Aghd, a fine hand-sewn wedding cloth glittering with gold and silver threads, spreads out. Food and objects traditionally associated with marriage are arranged on it.

This event takes place on the second Sunday in January. At this time people offer special rice cakes known as mochi to women’s mirrors and men’s armor. These also go on the family altar. Activities during this celebration honor the God Toshigami, a Deity of good harvests and prosperity. Kagami Biraki translates as “mirror opening” the mirror being among the three most important symbols in Japanese folklore (the other two being a sword and a sphere). 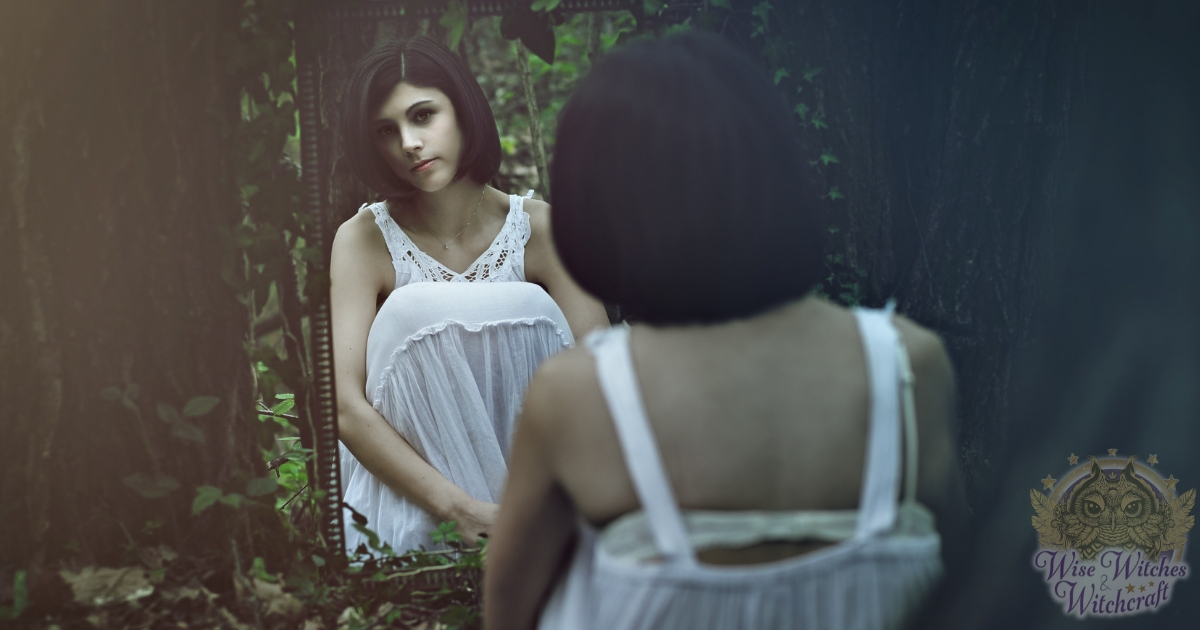 On the fifteenth day of the first lunar month, Yuanxiao Jie, the Lantern Festival, takes place. In ancient times, young women and men did not have free social contact. The Lantern Festival became a perfect opportunity for looking for marriage partners based on an old love story that, as you might suspect, includes a bronze mirror playing matchmaker.

This Hindu celebration meaning “nine nights” begins on the day of the new moon and lasts until the ninth day of Ashvin (September and October): This is the most auspicious time on the Hindu calendar honoring the Dev (goddesses of time, motherhood, plenty and luck among other things). Among the traditional gifts for this period, we find turmeric, barley shoots, and mirrors (an attribute of Devi).

The purpose of the ritual is restoring harmony between individuals and their internal and external environment through purification. Before entering the temple, people remove their shoes, wash their hands and then sit on cushions on the floor. On the altar, offerings such as water, salt, rice, and wine are already set up. A round mirror, a holy symbol of the sun, is central to the rite. By the time the ritual ends, all the offerings have been blessed before the Sun Mirror and shared among all participants. 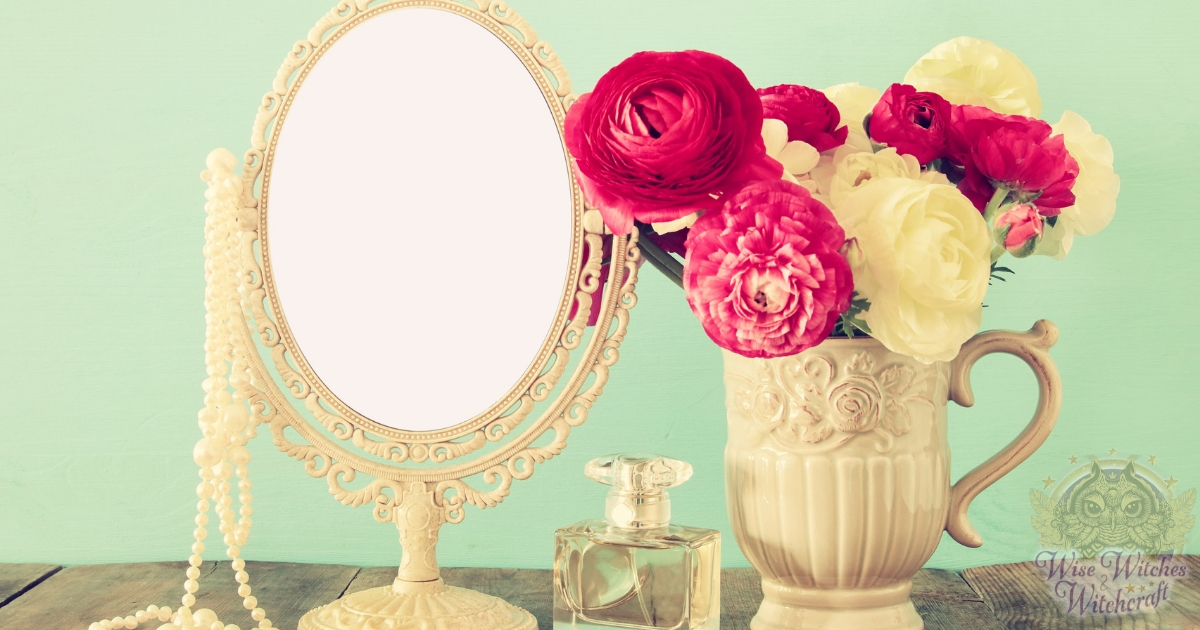 As part of betrothal and marriage rites, the art of shisha (a word meaning “mirror”) became popular in Northern India some three hundred years ago. Women of lower class homes embroidered their garments and fabrics with tiny mirrors to emulate the luxurious clothing of the ruling class. As they sew, other women of the household help out while exchanging good advice for the couple.

Based on “Little Book of Mirror Magic,” by Patricia Telesco. All rights reserved.