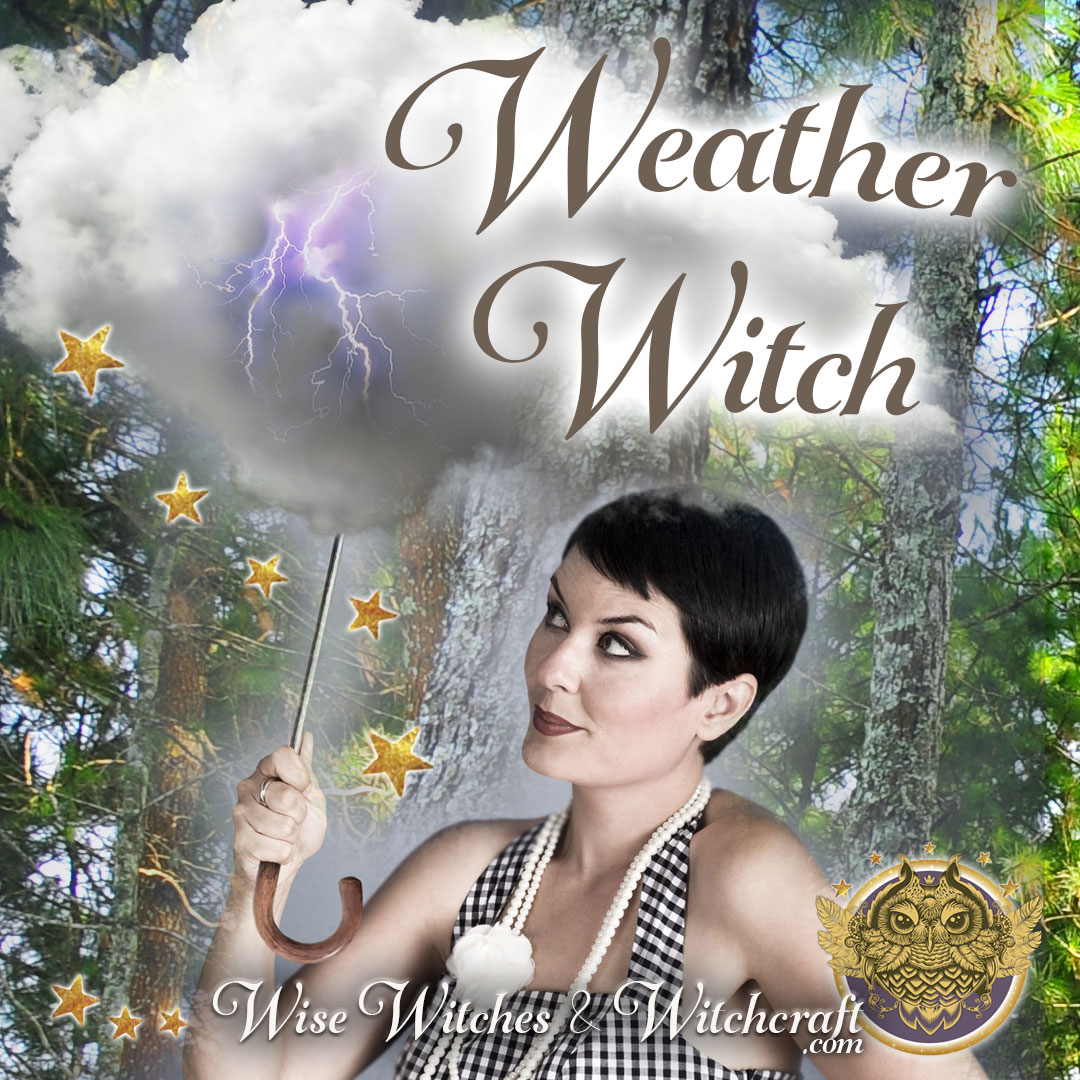 “Green was the silence, wet was the light, the month of June trembled like a butterfly.”
– Pablo Naruda

The local weather report is looking nasty, and you have an outdoor wedding. You could put up a tent of some sort, or perhaps you can call on a Weather Witch! As the name implies, the Weather Witch focuses on all things having to do climate changes and patterns. This includes psychic forecasting of future conditions to aiding with necessary changes in weather. For some practicing Weather Witchcraft, their art may also include Water Witching (dowsing). 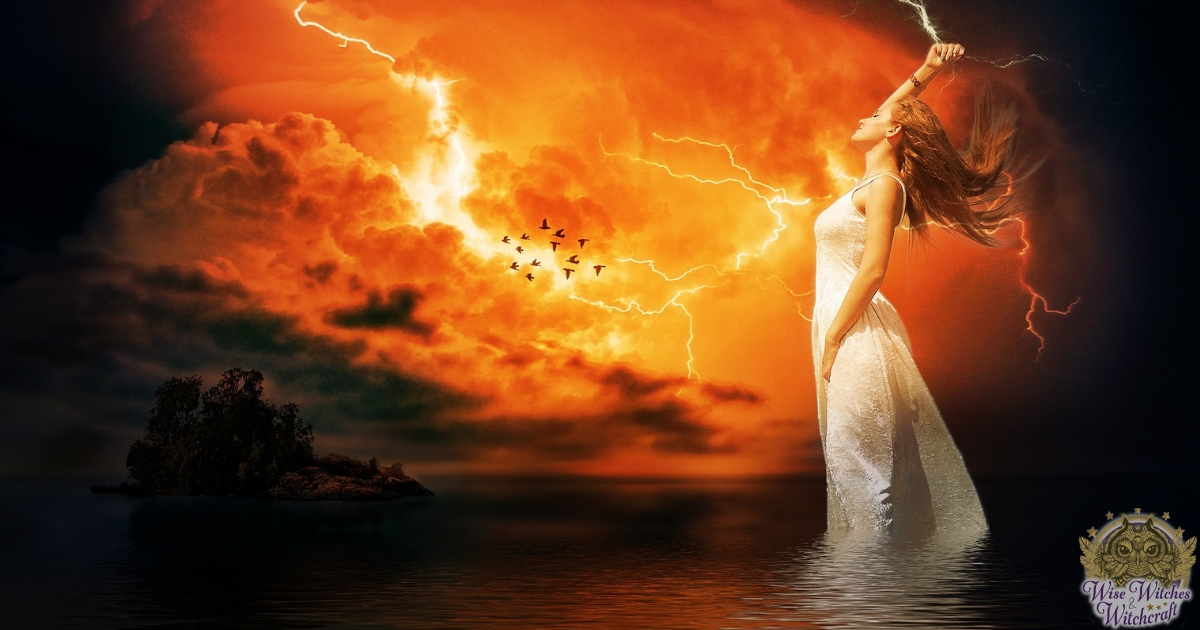 If we look through various historical accounts, it seems the traditional Weather Witch focused their art on what was necessary for both agriculture and trade. Long droughts put a huge pinch in a community’s coffers, let alone their ability to provide food. Windstorms and lightning deterred many a sailing ship and halted the traveling merchant until the conditions improved. Horses can be spooked by thunder, which could result in harm to a rider or losing valuable goods.

With this in mind, any town, ship or roaming “salesperson” who had a Weather Witch on hand was fortunate indeed. For example, say a sailing vessel planned to leave on a specific day, but there was no wind. The Weather Witch knew how to raise a breeze or full-on gusts just by whistling (and some practicing this form of witchcraft even know how to adjust the temperature of the air!). Those without natural whistling abilities might use a carved whistle instead.

Another means of helping travelers came through Knot Magic. Myths and historical texts talk about Knots as a powerful form of spell casting. Alexander the Great untied the Gordian Knot freeing royal power from the Gordias and directing it to himself. Gordias were members of the Phrygian house that included King Midas. A square knot, also known as the Knot of Heracles, has healing power. Take the dressing of a wound and bind it with this knot for faster recovery.

For the Weather Witch magically permeating rope knots for use by sailors was pretty standard. These ropes had three knots. Unbinding the first brought mild winds. The second one released a steady gust. The last knot was not really supposed to be used as it summoned up a violent whirlwind, dangerous to the ship and any neighboring landing ports. The question of why the Witch put that third not in place has been one of conjecture. Perhaps it was a test. Magic should be respected, but greed and notions of grandeur can arouse feelings that the third knot wasn’t as bad as described. Instead, the wind would give them a significant advantage against other ships. This comes under the category of “bad ideas.”

Casting, Catching and Taming a Storm 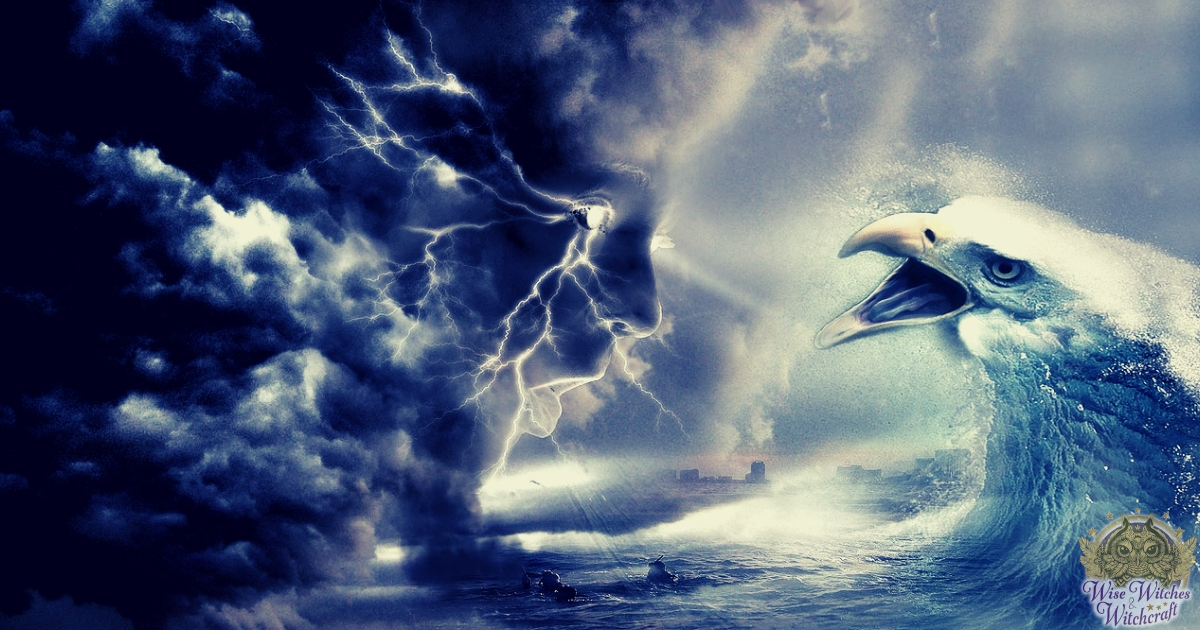 There are a variety of ways in which the Weather Witch may cast her magic for rain. One of the common elements involved was water for its obvious symbolism. Blowing over water (or whistling) generates the energy. To make this a gentle, nourishing rain one should not breath too hard or too fast, and whistling should remain a steady low tone.

Catching a storm, as you might imagine, is not as simple a procedure. This isn’t like casting a line out for a fish. Storms generate tremendous power that the Weather Witch must direct carefully. Whether she hopes to bring the storm closer as a source of water, or endeavors to move it away for safety, this is a very intimate encounter with Mother Nature (who generally doesn’t enjoy manipulation). That is why people practicing Weather Witchcraft issue great caution and consideration before tackling such a grand elemental.

There is also the concern that other Weather Witches involved in watching this storm may work their own spell. Now you have dueling magic that can turn into a push-me-pull-you event making the weather highly unpredictable. Mind you, the weather is naturally erratic, so this only exasperates the situation.

As for taming a storm, the mindset has two avenues. One is bringing an offering to the source, such as a sailor gifting gold to the sea using the incantation as directed by a Weather Witch for calmer waves. The second approach is similar to the magical wind knot, only in this case the focus is on binding part (or all) of the weather, and restoring calm. 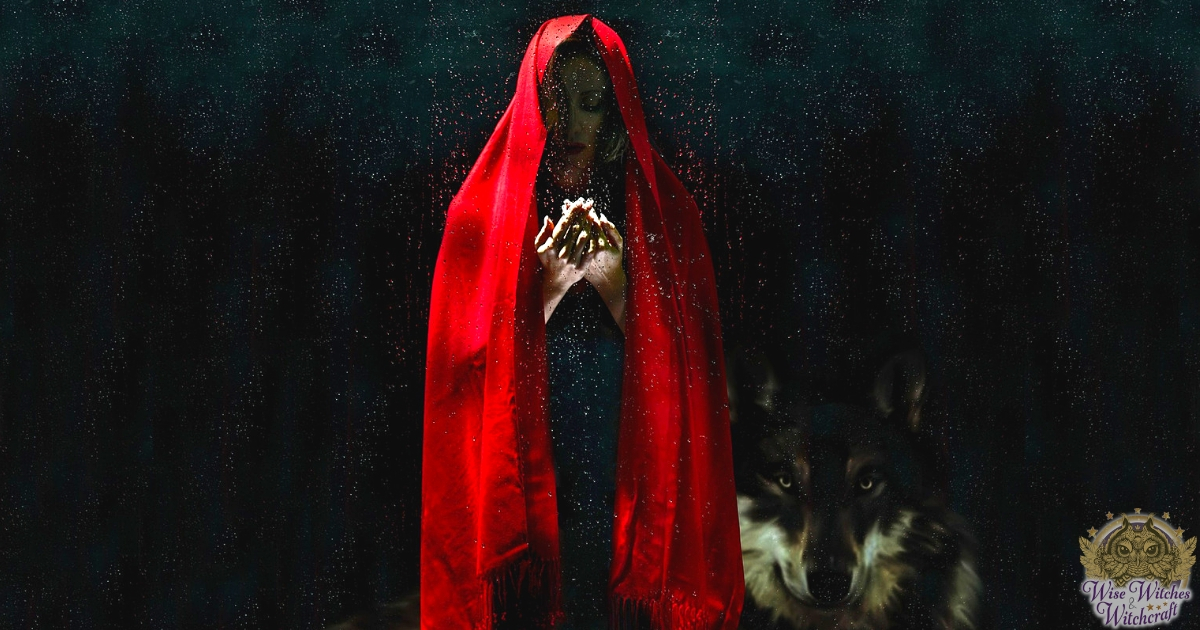 There are accounts of various witches, including Gerald Gardner, local Hereditary Witches and the New Forest coven during World War II who used their understanding of the weather against the enemy. The idea was raising a storm for deterring invasion and give the “good guys” time to regroup and plan. Using Wiccan terms – they raised a turbulent cone of power and directed it toward the Germans. Such conditions would also make air strikes far more difficult.

The Weather Witch and Meteorology

Modern science gives us a lot of information on the factors that produce our daily weather. Knowing this information, along with having various monitoring devices allows the weather person to give you your daily forecast. And, as any meteorologist will tell you, these forecasts remain difficult especially when you are looking forward by a week or more. Or, as they say in some places “yep, it’s raining. Just wait ten minutes.” A Weather Witch can certainly use the information provided by forecasts as a starting point, but after that, we move onto folk customs and traditions. 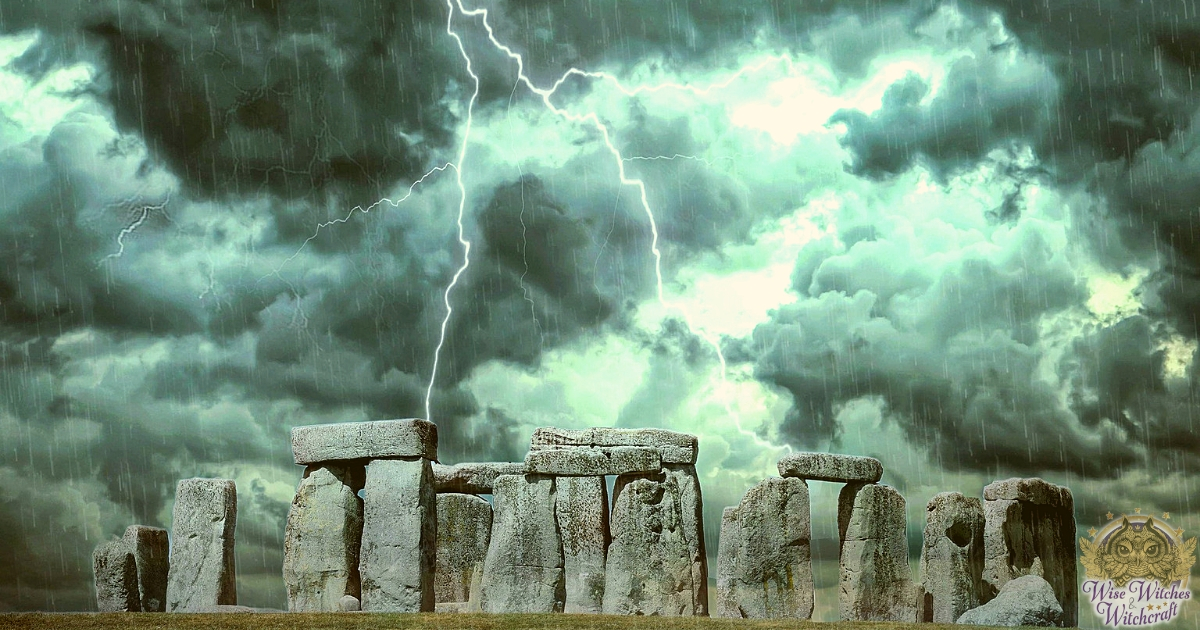 Do you remember the song, “rain, rain, go away, come again another day?” That is a charm aimed at clearing the clouds for a beautiful sunny day. Singing magical songs in witchcraft is a well-known method. Oddly, however, superstition tells us that lousy singing brings rain. So, ensure your success by finding the best vocalist among local witches for enacting this charm.

Another tool for the Weather Witches (and one common to many forms of Witchcraft) is a bell. Around the world, bells have definite magical applications. In the Far East, for example, people ring bells to communicate with spirits. Buddhism calls the sound of a bell “pure wisdom.” Historically bells chime out warnings or drive away demons (this is how we get the phrase “saved by the bell”). This symbolism isn’t lost on the Weather Witch. She may ring a loud bell to overcome the voice of thunder (silence the storm). She may also hang consecrated bells in various locations for protection. The bells ring long ahead of a nasty weather front, warning the locals to prepare.

Weather Witches adhere to the idea of “If it works, keep using it.” They look around to readily available items as part of their spellcraft. A broom (to stir the wind), yellow flower petals (for a sunny sky), freshwater (for conjuring rain) and wood from magical trees like Rowan (protection from lightning) could all play a role in a spells design. 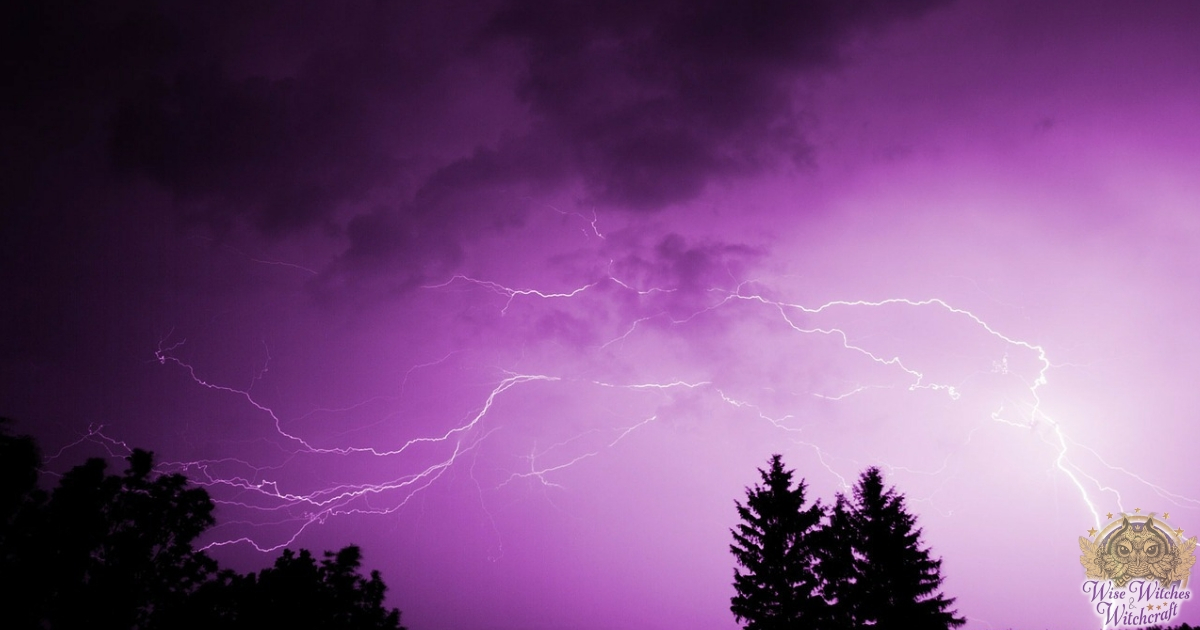 The Weather Witch knows full well that Nature has its own ideas about what’s best or necessary. No matter the Witch’s adeptness, Gaia may just say “no” or modify the energy for improved results from a global perspective. This can prove frustrating, but it’s part and parcel of the Weather Witch’s path.

The responsibility involved in wielding weather magic is mammoth. The slightest climatic change has ripple effects that aren’t easily foreseen. Thus the Weather Witch looks at needs versus wants before accepting any requests. They have much in common with Green Witches in terms of reverence for the spirit of the Earth. It is sacred ground we walk upon, and Weather Witches tread respectfully.