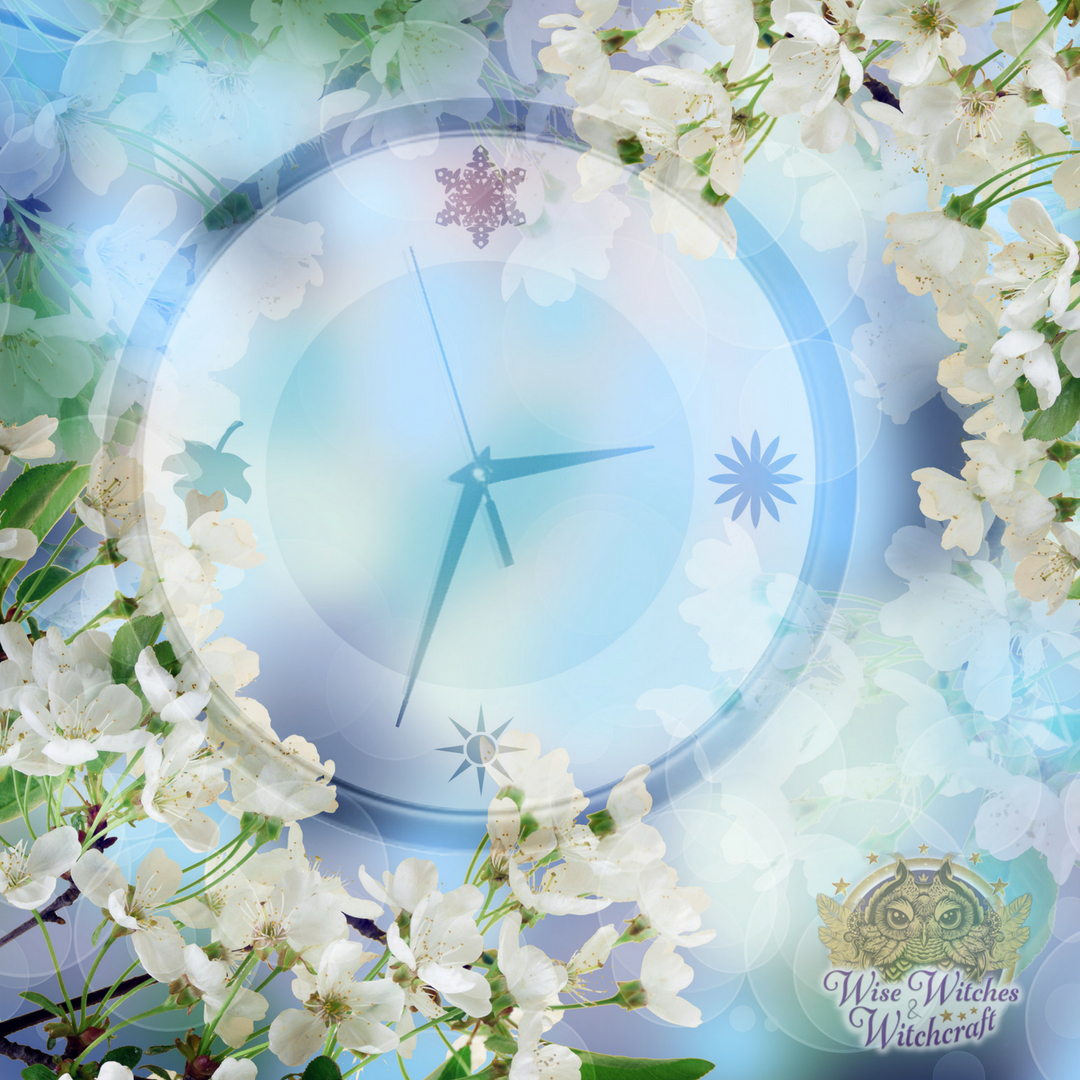 “Time is an illusion.”
– Albert Einstein

Every moment of every day holds unique magical potential. For thousands of years mages have watched the Sun, the Moon, and the stars to determine the best time to cast a spell or hold an observance. Over time, certain rituals became customary in their timing, like those for the seasons or those that commemorated important community events. Other rituals and spells, however, remained linked to specific astrological events, the practitioner waiting until the heavens and Earth synchronized with their magical goal. 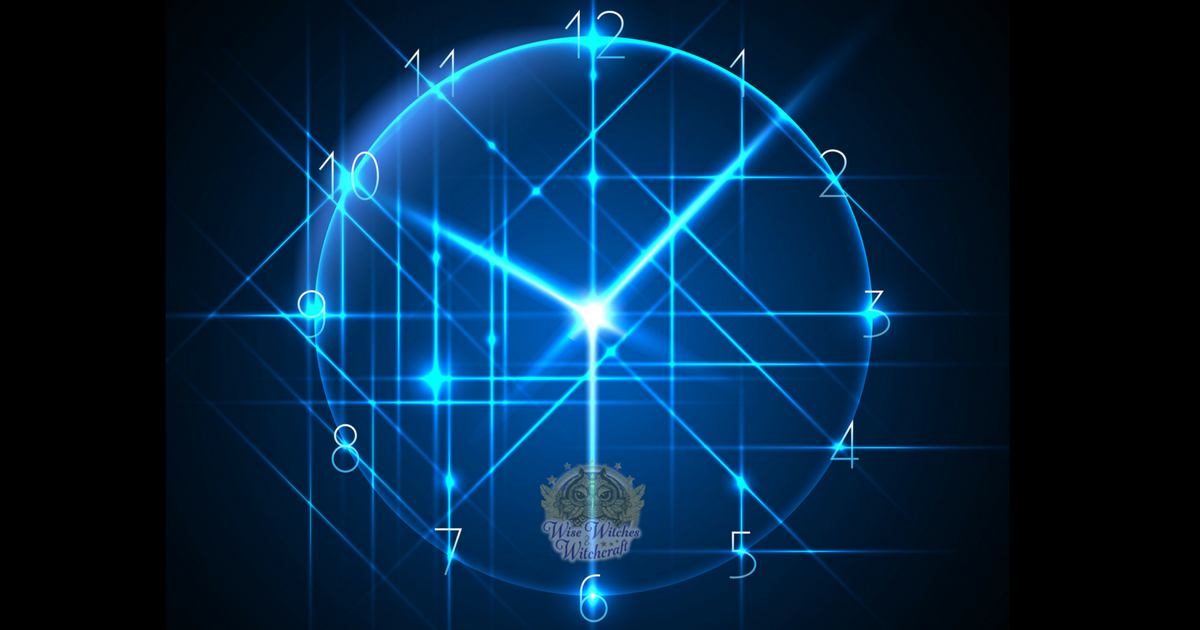 These days “need” rarely has patience as a virtue, and our schedules don’t always allow for detailed time constraints. One ritual calls for enacting it while you’re at work (try explaining that lunch extension to your boss). Another spell says cast it at 2 a.m. when many good Witches and Pagans have already hit the hay. Even the best laid Circle plans of mice and mages goes awry when the kids get sick or unexpected company arrives. In those moments give yourself a second to huff, then move on to finding an answer to your quandary.

Figuring this out requires a little creativity and out-of-the-box thinking. Say you’re looking at instructions that suggest starting at midnight. Well, right now somewhere in this world it is midnight. Since time is a man-made structure, and since magic works “out of space; out of time” just go ahead and start you magic when you need it. The universe will pick up your cues, promise. 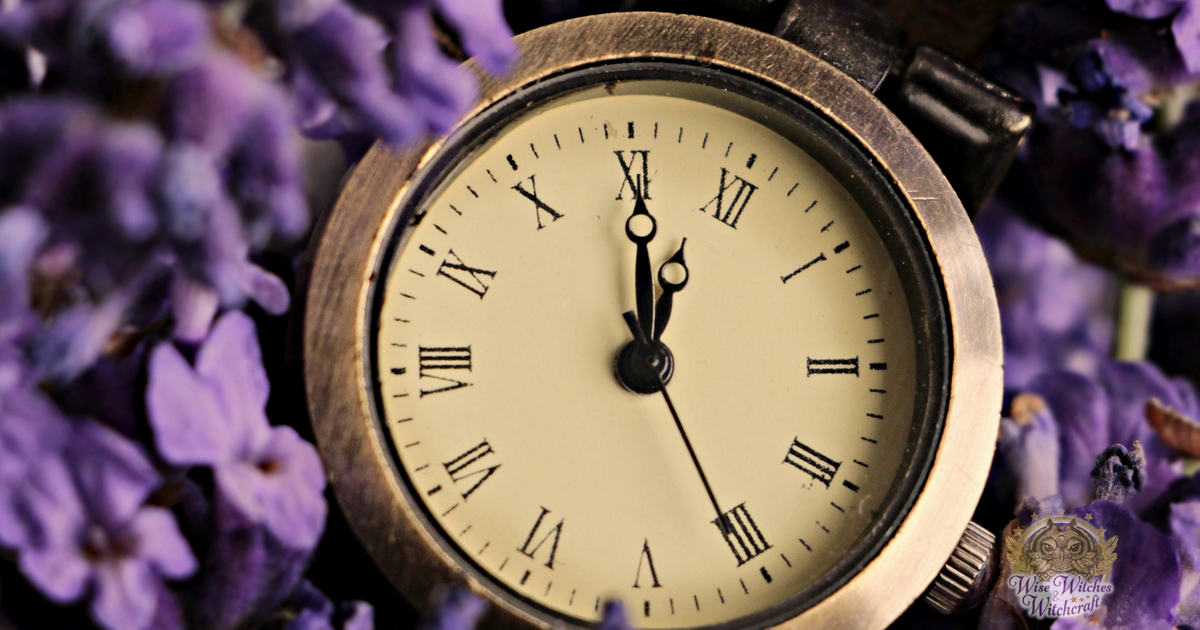 Having said all that, when your agenda does allow it, timing your rituals for auspicious hours, days, months, moon signs, and the like certainly can help with successful, potent manifestation. How do you choose among the options? Good question. The best answer is that you try to use them all, if possible (finding the right moon sign, during the right month, on the right day, at the right hour). This, however, can get very complex, as you might imagine. So, the second-best option is to put as many positive factors together as possible.

To do that you’ll need a decent astrological calendar to which to refer. While there is a lot more to metaphysical timing than what’s presented here, this is a good foundation for your Book of Shadow or Witch’s Spell book. Let’s review weekdays, months, times of day, moon signs and sun signs for their basic correspondences.

Weekdays and Associations for Magickal Workings 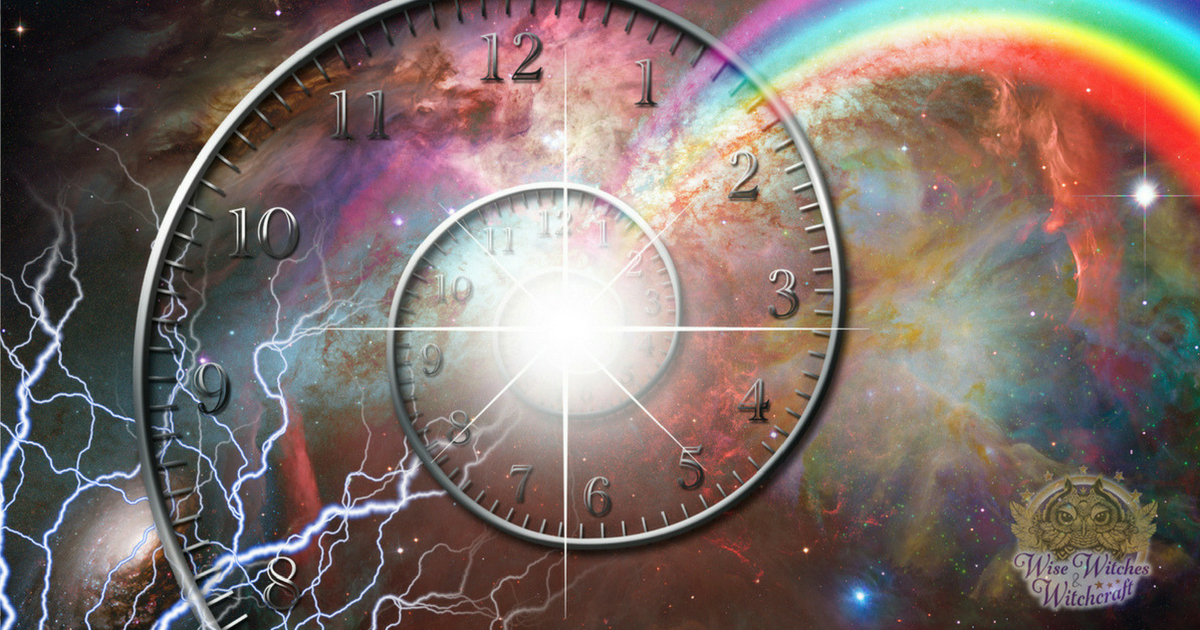 We can thank the ancient Sumerian and Babylonian calendar for the idea of a 7-day week. They, like we, timed their weeks according to the moon’s transition from the start of a new moon to the start of the next. Every month a day or two had to be added because the moon’s cycle is about 29 ½ days long.

Jewish custom also observed the 7-day week. Romans and the Germanic/Norse people finally caught up in 321 AD, naming their days after various Gods and Goddesses. Nearly all languages in that region adopted these names.

Monday: Monday gets its name from the Moon, so it’s not surprising that this day rules over lunar matters including instinct, psychic gifts, the maternal nature, and water magic.

Tuesday: Tuesday gets its name from the Scandinavian god Tyr who presided over laws and athletics. His name also means “council.” Tuesday influences matters of physical and mental activity, including reasoning and advice.

Wednesday: Wednesday was named after the Germanic god Odin (Wotan to the Teutons), who presided over magic, the muse, and shrewdness. Wednesday therefore influences creativity, innovation, occult studies, and psychic insight.

Thursday: Thursday is Thor’s day. In Scandinavian tradition, Thor was a kindly god who ruled the weather, blessed marriages, and made sure oaths were kept. Thursday’s energies influence relationships, weather magic (especially rain), and commitments.

Saturday: Saturday was named after Saturn, a Roman vegetation god whose festivals included abundant feasting and socialization. Saturday’s energies influence personal transitions, accent encouragement, and clarify the principle of reaping what we sow.

Sunday: As one might expect from the name, Sunday is the Sun’s day. Since the Sun represents the god aspect and all its attributes, Sunday’s energies influence logic, reasoning, leadership skills, and the conscious mind. It is also considered a “blessed day” for any solar-related magic. 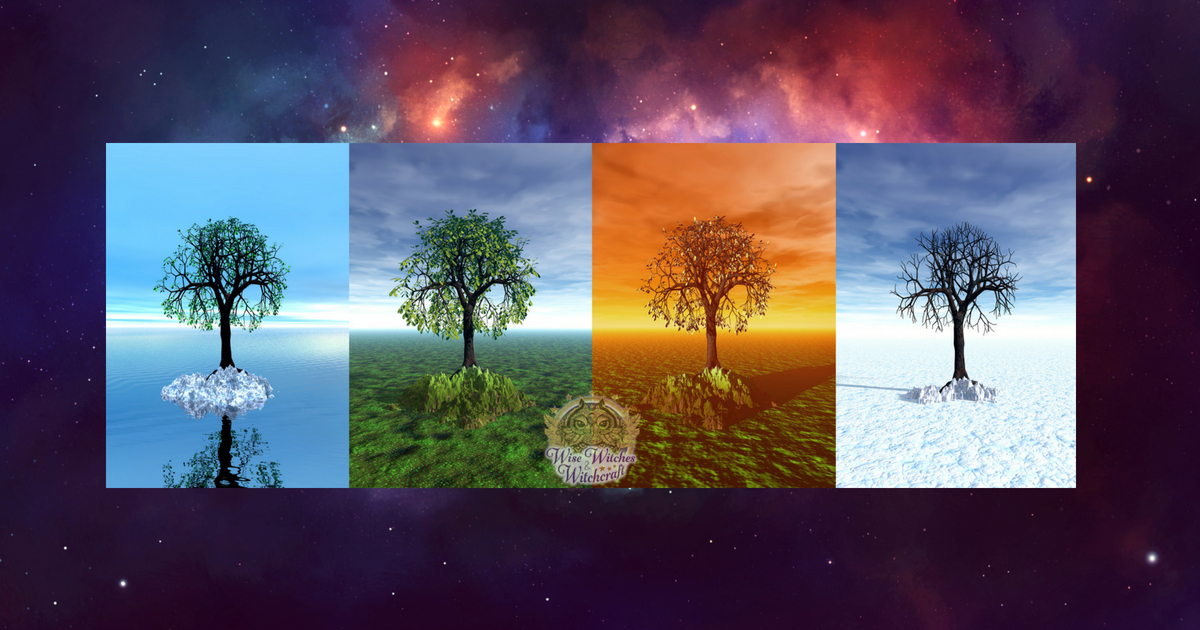 The ancient Sumerians had a 12-month system that began on the first sighting of the waxing moon’s sliver. The Greeks were no strangers to the idea of 12 months in the year, and they likewise used the moon phases as their guidepost. The Romans, however, were slow on the uptake having 304 day years with 10 months. The first month on their calendar was March. Thanks to Julius Caesar this system transformed into a 365-day round with two new months (January and February) added in 4 CE.

The Roman system has given pause to Numerologists. Do they credit May with the number 3 (as the current third month of the year) or the number 1 following Roman custom? And then what happens to January and February. To be honest, you will see both concepts presented. Which one you prefer is up to you. 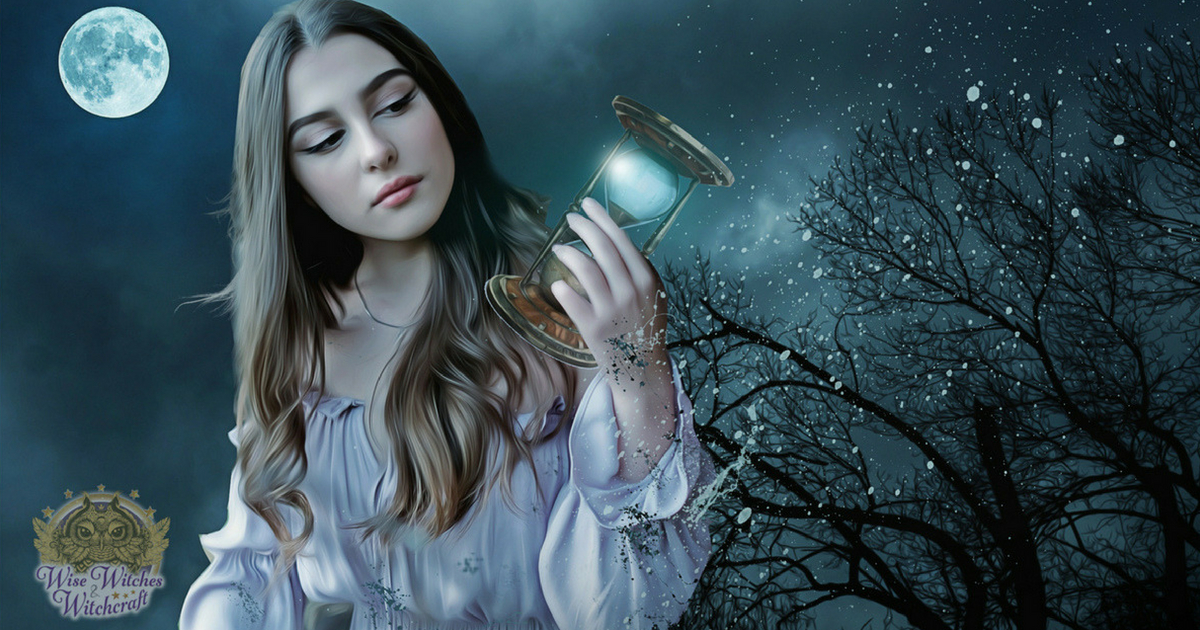 The history of the 60-minute hour in a 24-hour day is rather complex. Leave it to say that some cultures started counting time at sunrise, using Babylonian sundials as a guide. Of course, the length of a sun-hour changed depending on the time of year.

Other cultures in the area of Italy started counting hours come the sunset. This remained in use up until the mid-1700s. The Islamic day also begins at sunset. Meanwhile astronomers put their own wrinkle in time by counting their days starting at noon because that provided the most accurate observational measures. Our modern clock begins counting at midnight. 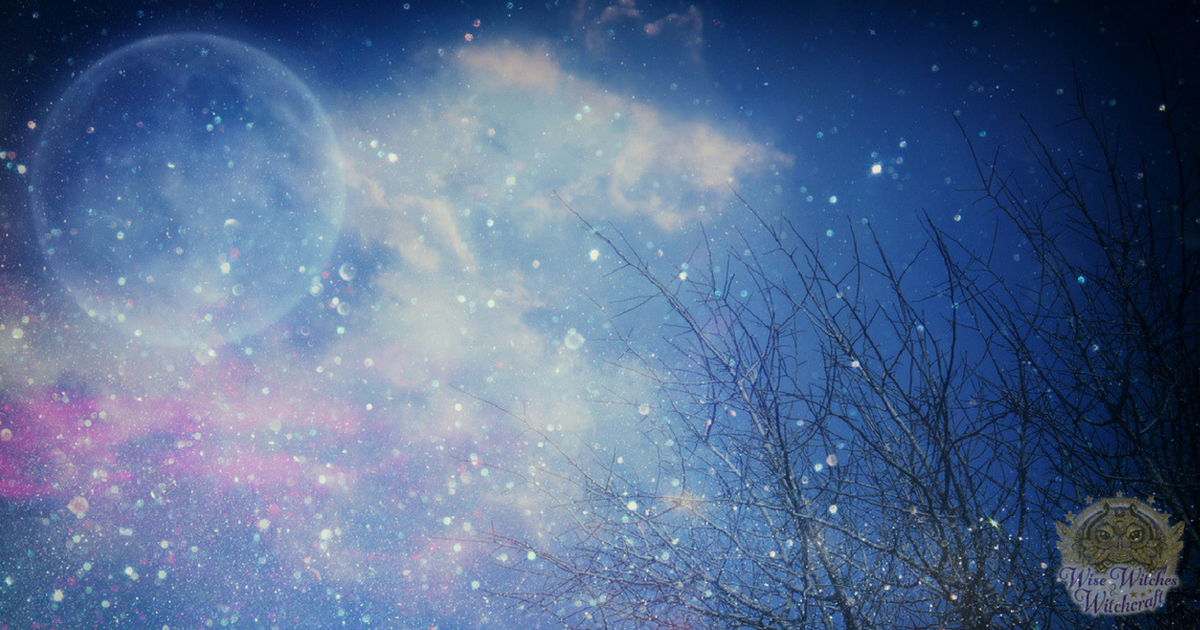 As the moon orbits the Earth it passes through the 12 Zodiac signs, remaining in each for just over 2 days. So when you hear the phrase “when the moon is in Aries” that’s what it means. Each one of those spans has specific underlying energies that you can use for supporting your magical efforts: 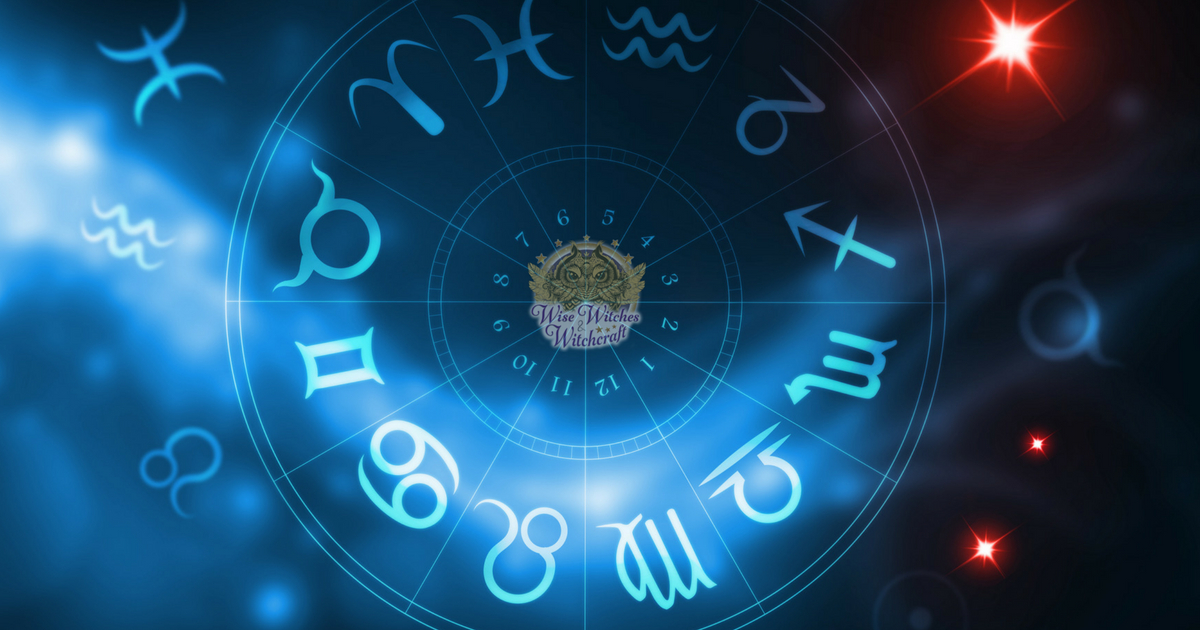 As the Earth moves around the sun, it looks as if the sun crosses various Zodiac signs. While this solar movement is an illusion, it’s one that Astrologers notes and what became the foundation for our Astrological Birth signs.

Just for Fun: On what day of the week and in what month were you born? Compare the associations given for those to your actual personality and traits. How have the energies affected you, if at all? This doesn’t really have to do with magical timing for spells and rituals, but it’s an interesting activity. Share your results with friends. 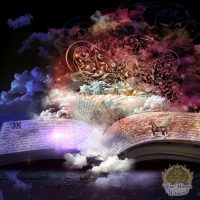