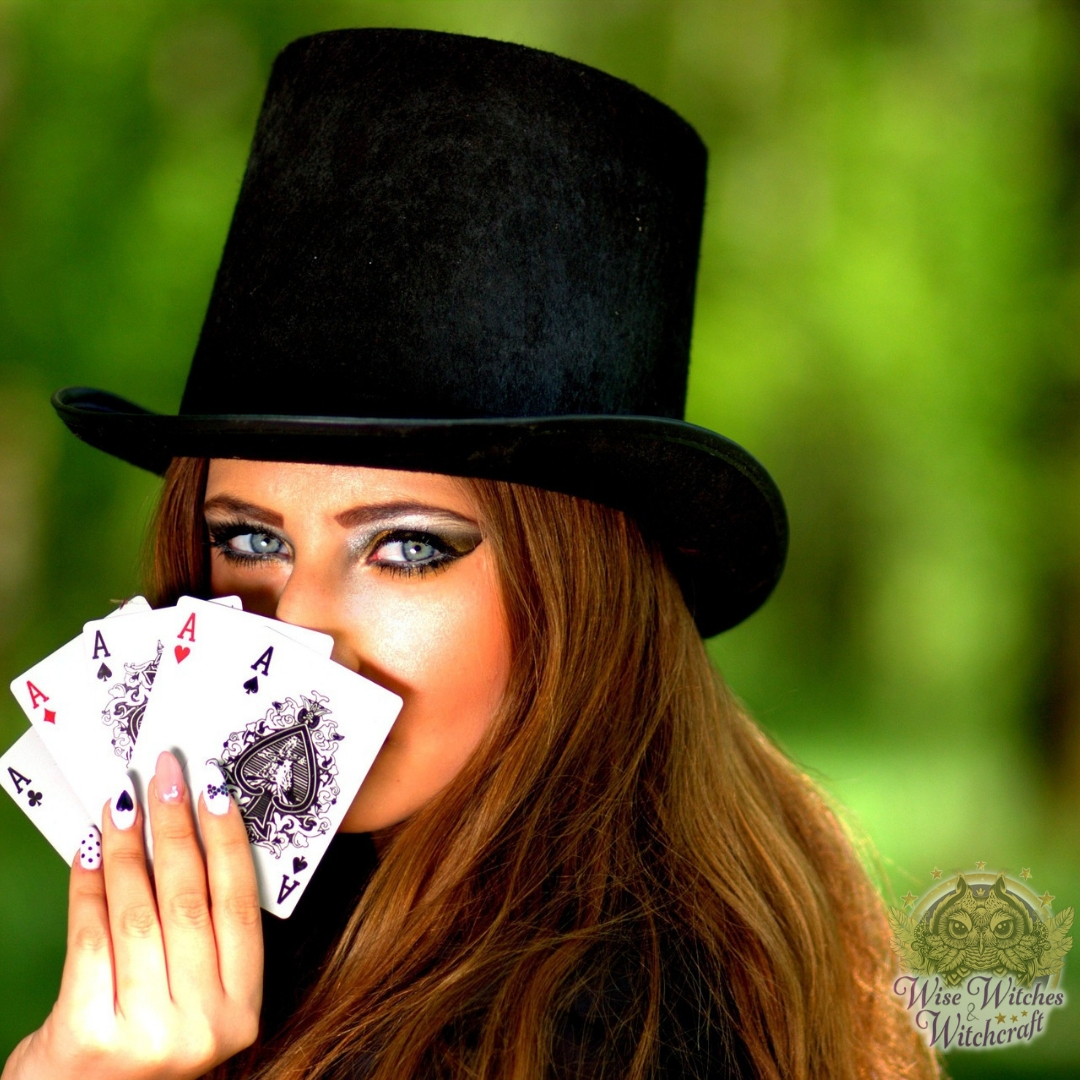 “Destiny plays its cards in a way that no one can comprehend.”
– Anurag Shourie

Rather than being cast like dice, cards are purposefully shuffled with the question in mind, then drawn to determine an insightful answer. For card divination (also called Cartomancy), most people get a tarot deck or regular playing cards, but other options exist. Business, greeting, flash, or hand-drawn symbolic cards are functional media for the creative-minded modern Witch or Pagan.

Card Divination: 13 is the Magic Number 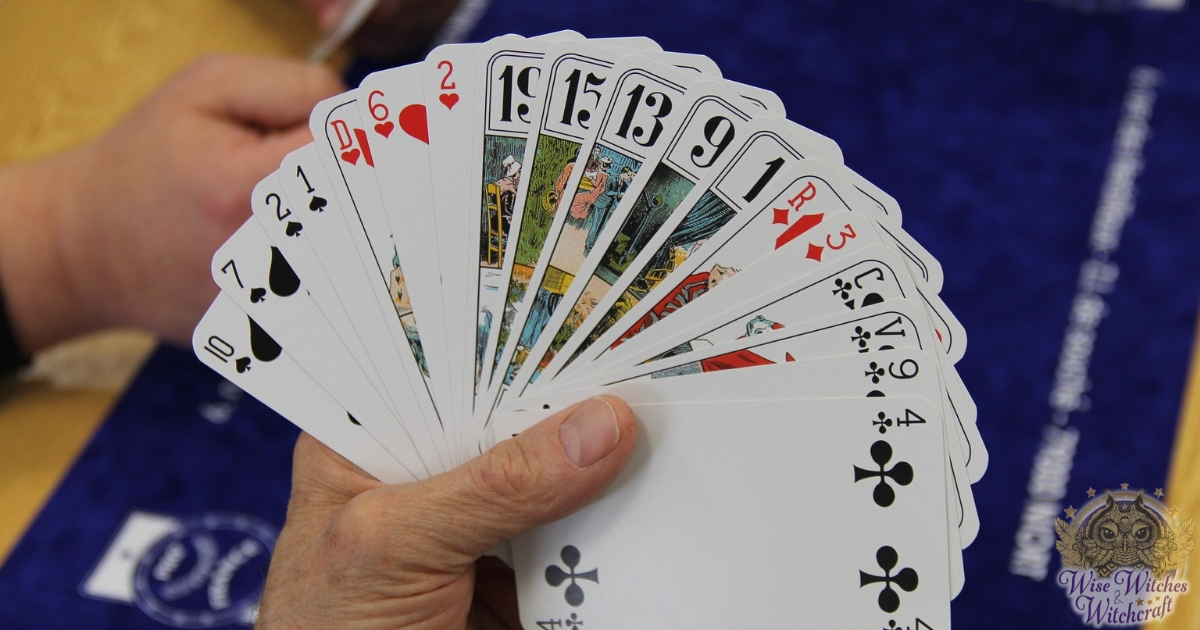 Tarot cards and playing cards already have some interpretive values ascribed to them by tradition. However, if you make other card sets, create at least thirteen cards so the responses can touch on the diversity of human experience. You’ll also need to predetermine each card’s meaning (both upright and reversed), as you did with the personally devised casting systems. Make note of those in your Book of Shadows for future reference.

The number of cards drawn out of a set for a reading varies from system to system, so it’s really up to you. You can draw one for a yes or no answer, but for a little more insight, draw at least three cards:

If you decide to draw more cards, consider some traditional tarot or rune layouts for each card’s designated meaning. 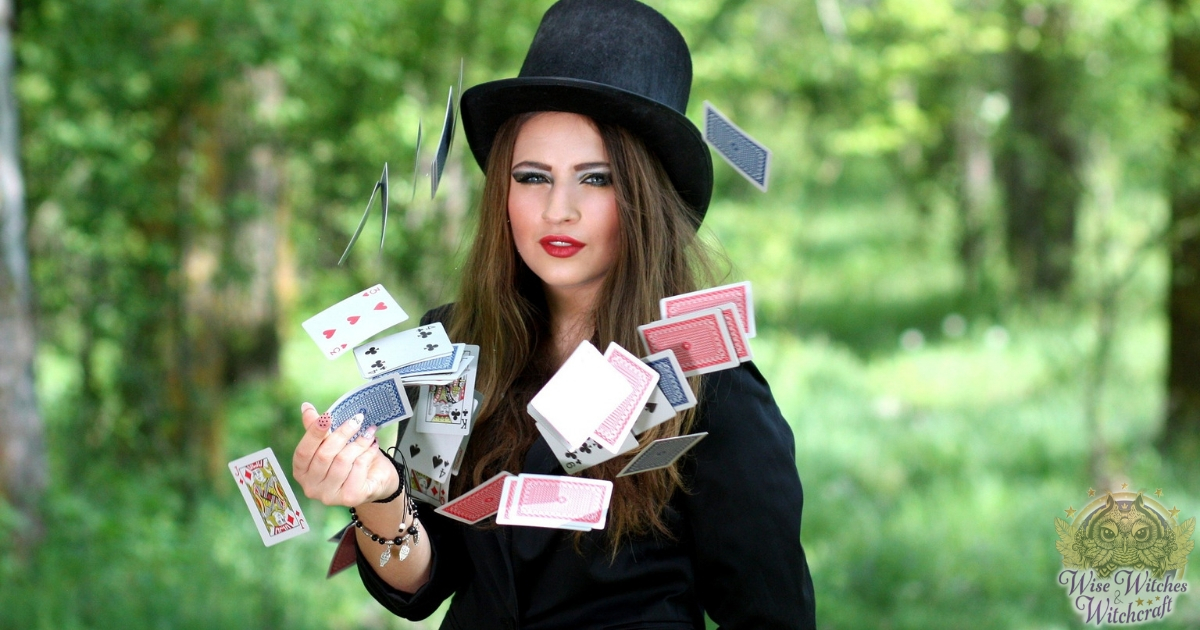 Playing cards are the relative of tarot decks in a simplified form; they are something you can use to perform Cartomancy, another type of divination. Having forty instead of seventy-two cards (without face cards), the four major suits of playing cards correspond to the four main symbols in tarot:

If you are buying a playing card deck specifically for divination, get one with a definite right-side-up when you look at it (in other words, you can tell when the picture on the card upside down). Doing so increases the potential interpretive values of the playing cards from forty to eighty potential outcomes. Next, take out all the face cards and Joker; this leaves you with Ace through Ten in each suit.

Shuffle the deck while thinking intently about your question, draw three cards, then interpret them according to the following generalized list (or one of your devising). The list gives the upright meaning first and reversed meaning second. 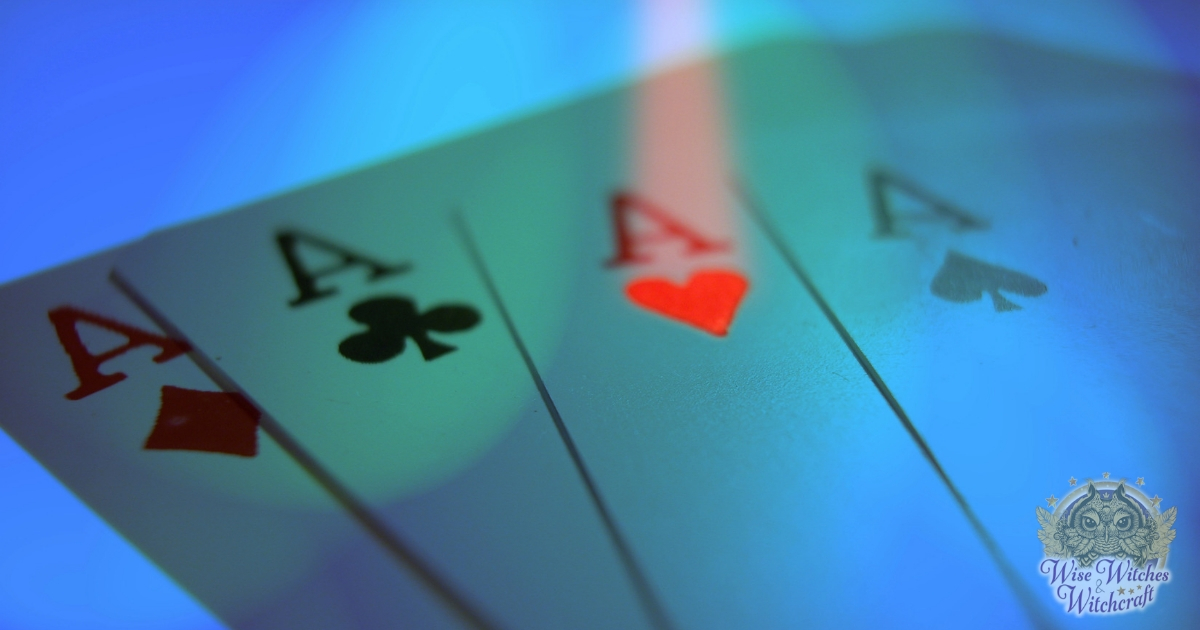 Ten:
Upright − Success despite difficulties
Reversed − Success, but only after a long, diligent struggle

Five:
Upright − Good counsel from a friend
Reversed – Listen to your heart instead of others’ opinions

Four:
Upright − A move or personal transition; stay put-stop
Reversed – Looking elsewhere for what you already have 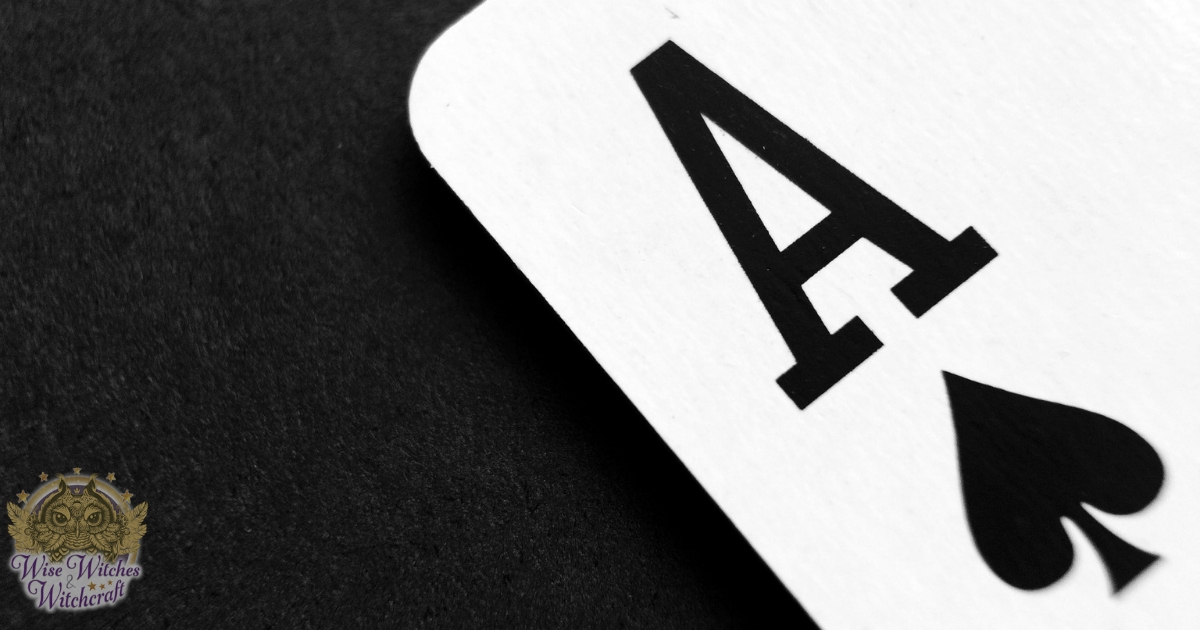 Two:
Upright – Lies and underhandedness
Reversed – Betrayal by a trusted friend or companion

Ace:
Upright – Diversion from a conflict
Upright – Pleasure that results in trouble or an argument 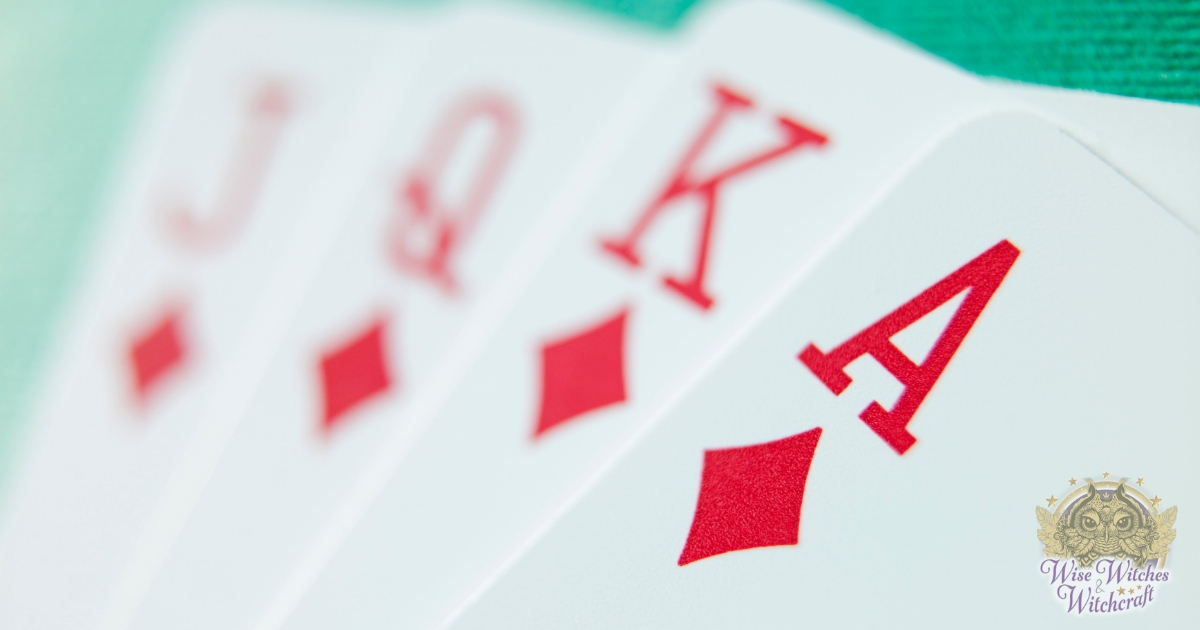 Nine:
Upright – Postponement of plans by choice
Reversed – Things that you cannot control cause delays

Eight:
Upright – Improved finances help a relationship
Reversed – A relationship whose focus is wrong (as in money)

Seven:
Upright – Spend a little money to get away from it all
Reversed – Be prudent in your travels or use of vacation time

Four:
Upright – A raise or promotion
Reversed – Carefully consider this opportunity, it may not be as good as it looks

Two:
Upright – A partnership blossoms potentially into love
Reversed – Watch any dealings with companions closely, they may have hidden motives 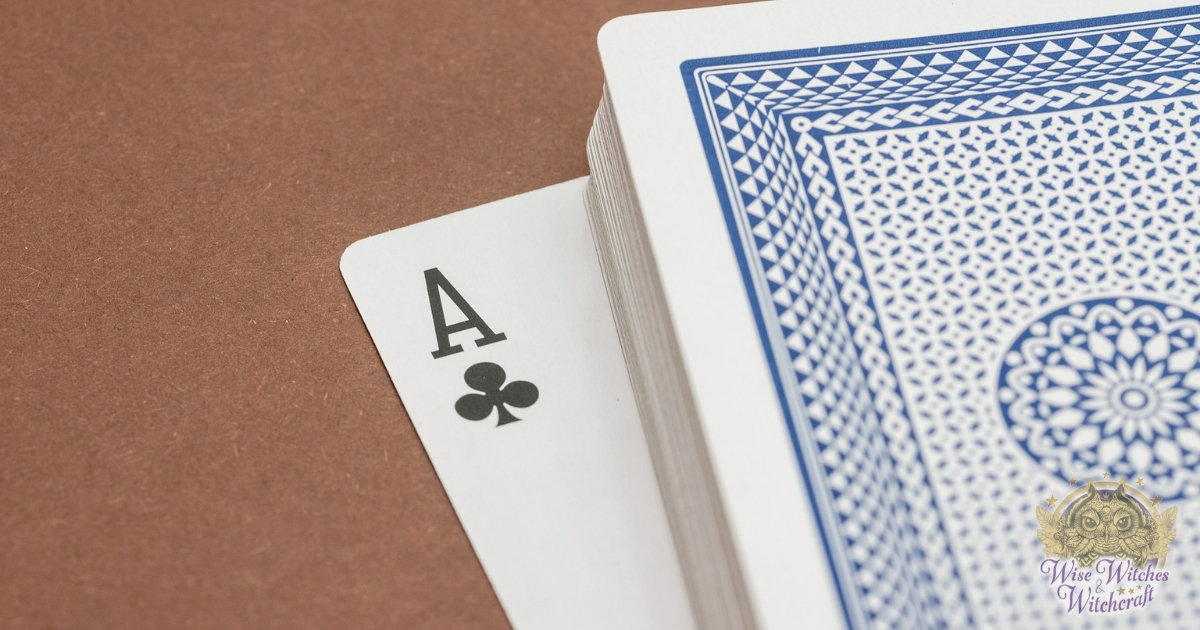 Nine:
Upright – A gift or offer of assistance
Reversed – Accept this, knowing strings are attached

Eight:
Upright – Help from an acquaintance leads to prosperity
Reversed – An offer that doesn’t produce what it promises

Six:
Upright – Mastery of some type
Reversed – Being a know-it-all instead of listening

Five:
Upright – Mingling with others provides good ideas
Reversed – Don’t listen too closely to well-intended advice without listening to your heart.

Four:
Upright – Disillusionment or dissatisfaction
Reversed – Consider your own actions as they’re causing more of a problem

Say you asked about love prospects. The three cards that appeared, in order, were the ten of spades, eight of clubs, and eight of hearts, all Upright; this means past relationships have burned you. The negative experiences are somehow affecting the way you act in current settings, especially with someone currently showing interest. If you let go of the past and open your eyes, you’ll see that a good opportunity is waiting from which a very satisfying relationship could develop.

Please note other interpretations for playing cards exist in various books on divination and Cartomancy. You can use the information here with other sources for personalizing or adapting this system further. You can also use the interpretive values for each playing card’s corresponding tarot card instead, which would provide more detailed responses. Again, use your instincts to guide you in how best to decipher and apply your readings.

Note: Some magical practitioners and readers include the Jack, King, and Queen of each suit while using their tarot correspondences. It’s also acceptable to include the Joker while using it to represent The Fool. 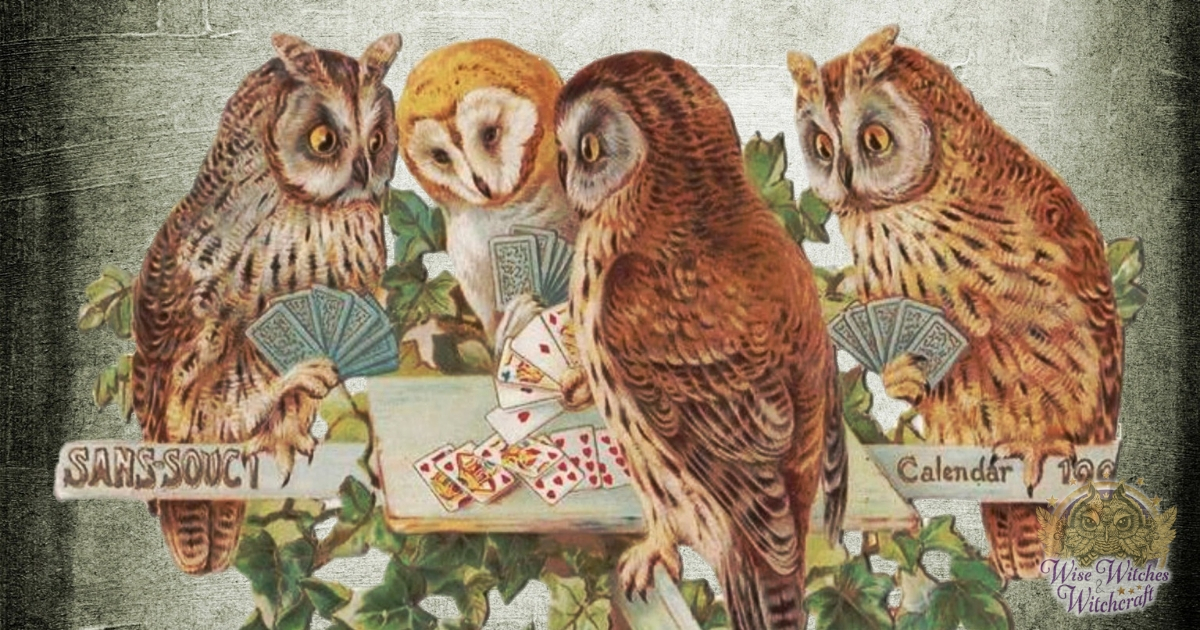 Another fun way to recycle and make a divination system that expresses your Spirit’s voice is to create a deck out of greeting cards you collect throughout the year. Cut the front of the cards featuring the images to separate them from the backings. Cover these with clear art spray or laminate them for longevity.

Look at the cards one at a time. Ask yourself, what words or phrases come immediately to mind with the imagery? Use these as a foundation for your interpretations. For example, bells might represent announcements or joyous occasions. Reversed, they could symbolize plans going awry. Other interpretations for the common imagery appearing on various greeting cards include:

Baby:
Upright – A new beginning or literal birth
Reversed – Delays in getting something started

Bow:
Upright – A gift or another pleasant surprise
Reversed – A surprise that turns out badly

Boxes:
Upright – Look beyond the surface to find your treasure
Reversed – A proverbial Pandora’s box opening

Boy:
Upright -A young man who is helpful and kind
Reversed – A young man with his own agenda

Cake:
Upright – Cause for celebration
Reversed – Don’t get greedy or overconfident

Cat:
Upright – Curiosity leads to further mystery
Reversed – A setback, but one from which you recover

Comics:
Upright – Your humor is an ally and a coping mechanism
Reversed – Don’t become the class clown

Fairy:
Upright – Follow your dreams wherever they lead
Reversed – Keep one foot in reality when making plans

Fruit:
Upright – Rewards that come by your own handiwork
Reversed – Being undone through lack of effort

Get Well:
Upright – Take a break before you get sick
Reversed – Unrecognized or untreated disease or illness

House:
Upright – A new residence or job
Reversed – Travel and the Gypsy Spirit

Ice:
Upright – Progress is halted temporarily
Reversed – A standstill over which you have no control

Man:
Upright – A man who is helpful and kind
Reversed – A man with his own agenda

Moon:
Upright – Listen to your instincts and trust your heart
Reversed – Your intuition is faulty, get counsel

Snow:
Upright – Cooling of emotions, not of your choosing
Reversed – Distance yourself to get perspective

Trees:
Upright – Put down your roots to withstand the wind
Reversed – You’re on dubious ground; watch your step!

Woman:
Upright – A woman who is helpful and kind
Reversed – A woman with her own agenda

Putting it to Work:

Write down each card in your set and the meanings you’ve given it in Upright and Reversed position in your Book of Shadows. Shuffle and think about your question, then draw out the cards. Returning to your earlier question about love, say you pulled the woman (Reversed), Sun, and heart (Reversed), in order. It might mean a particular woman from the past now negatively influences the way you think about relationships. While things are going smoothly now, love’s path will remain challenging in the future unless you shake off that influence. 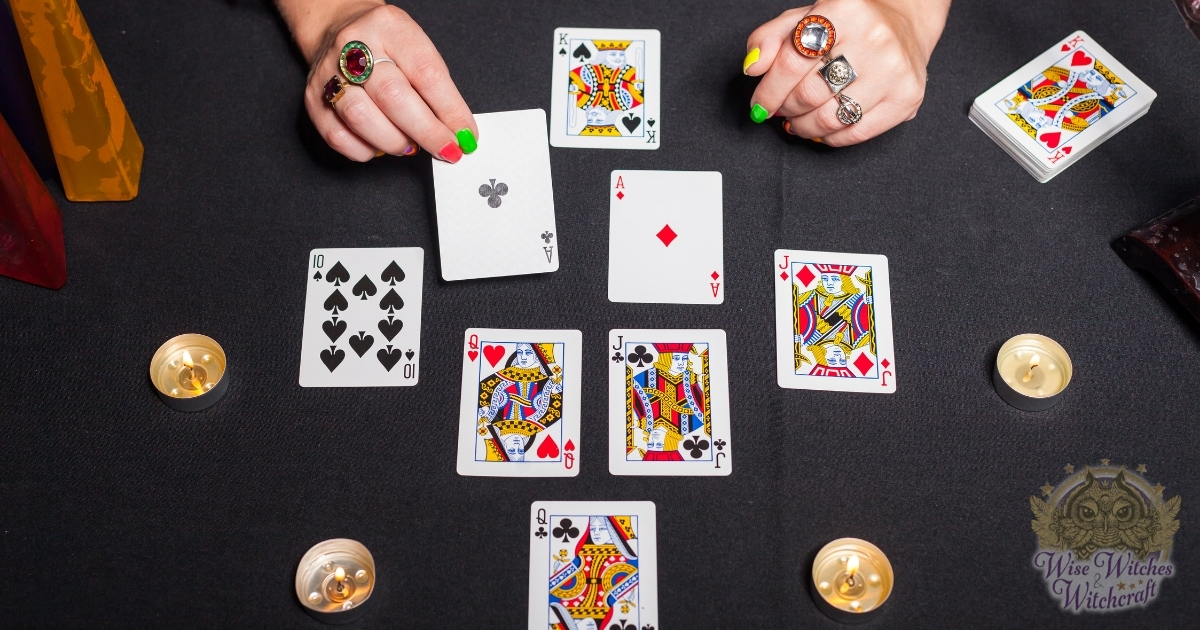 Learning Cartomancy isn’t difficult. The most time-consuming part of the process comes when you are making a deck for yourself or personalizing an existing system. Most people find they get much better results when creating a deck, allowing them to put their vibrations into every card during the deck’s creation. One final note: Don’t overthink the symbolic value for the cards you use. Intuition doesn’t require hours of study. Go with the first thing that comes to mind. You’ll end up with interpretations for every reading that genuinely resonates with you.

Adapted from “Wicca 2000,” by Patricia Telesco. All Rights Reserved.