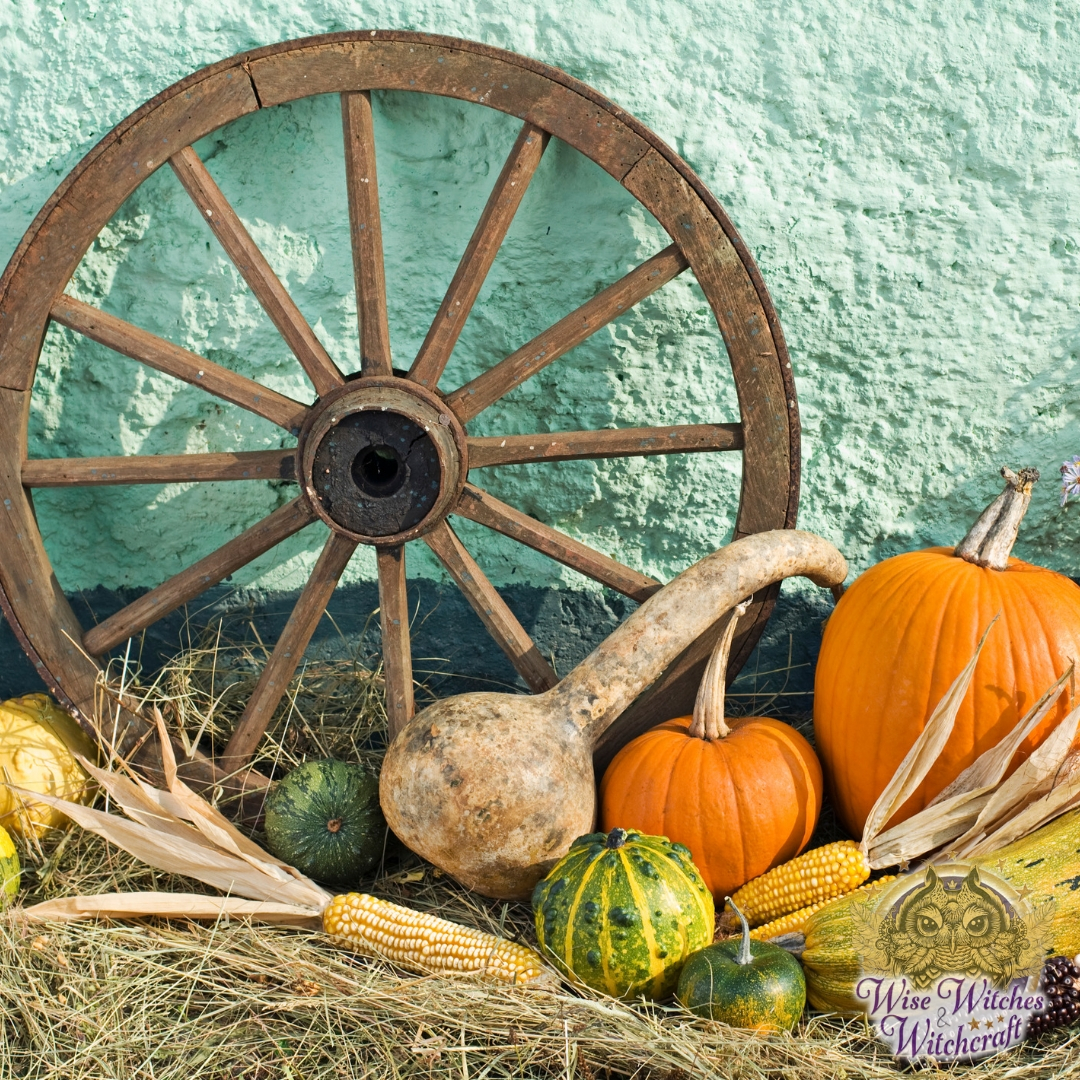 ”Many cultures believe that on a certain day – Halloween, the Irish Samhain Eve, Mexico’s ‘Dia de los Muertos’ – the veil between this world and the next is especially thin.”
– Michael Dirda

One main difference is the heavy spending occurring each year. In the United States alone, 179 billion people celebrated Halloween in 2017. On average, each person spends over $80.00 on holiday needs. The total amount of money spent for the year? (Can I hear a drumroll, please… Would you believe people in the US spent over $191 billion in 2017 alone? It’s true! But, you can rest assured knowing the ancient cultures didn’t have that kind of holiday budget! 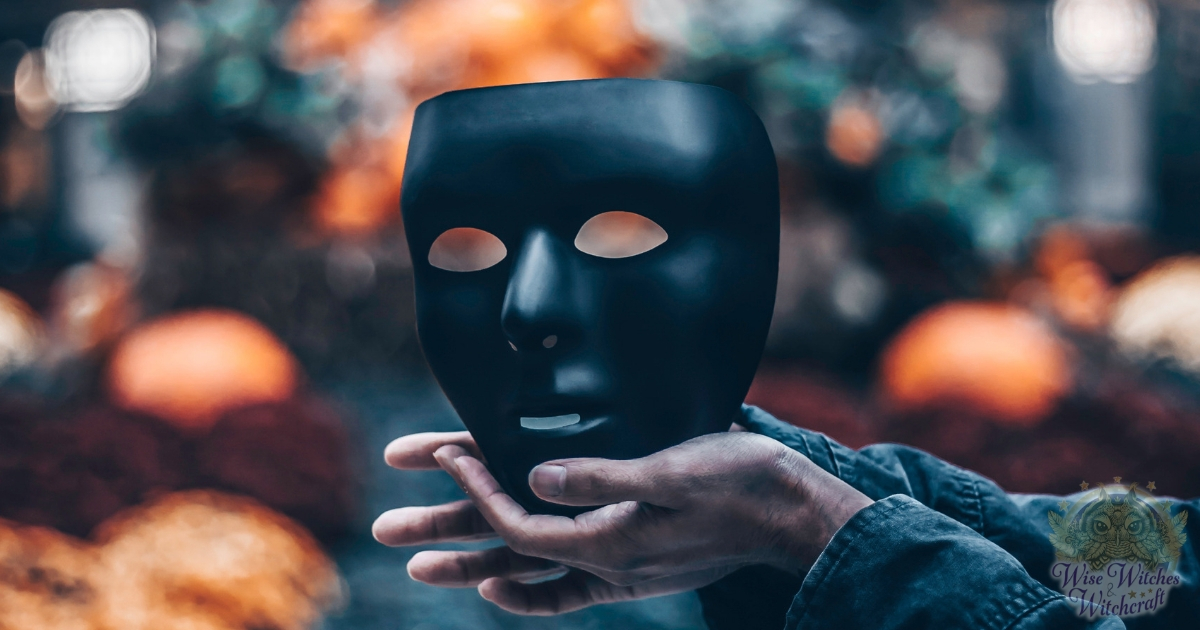 The way Pagans celebrate Halloween varies, but many of the traditions stem from ancient practices. So, what was Halloween like in ancient times? What cultures honor the holiday and why?

Ever wonder what would happen if there were only two seasons for the whole year? The Wheel of the Year still turns. It’s true! In fact, the ancient Celts saw the yearly division in two seasons, not four. The division of the year is simple. One half of the year was the light half. The other remaining six months was dark. The existing seasons were summer and winter. The celebrations corresponding to the seasonal divisions were Samhain and Beltane. These two days are holy dates in the year where the days shift from light into darkness and vice versa.

Samhain: The End of Summer 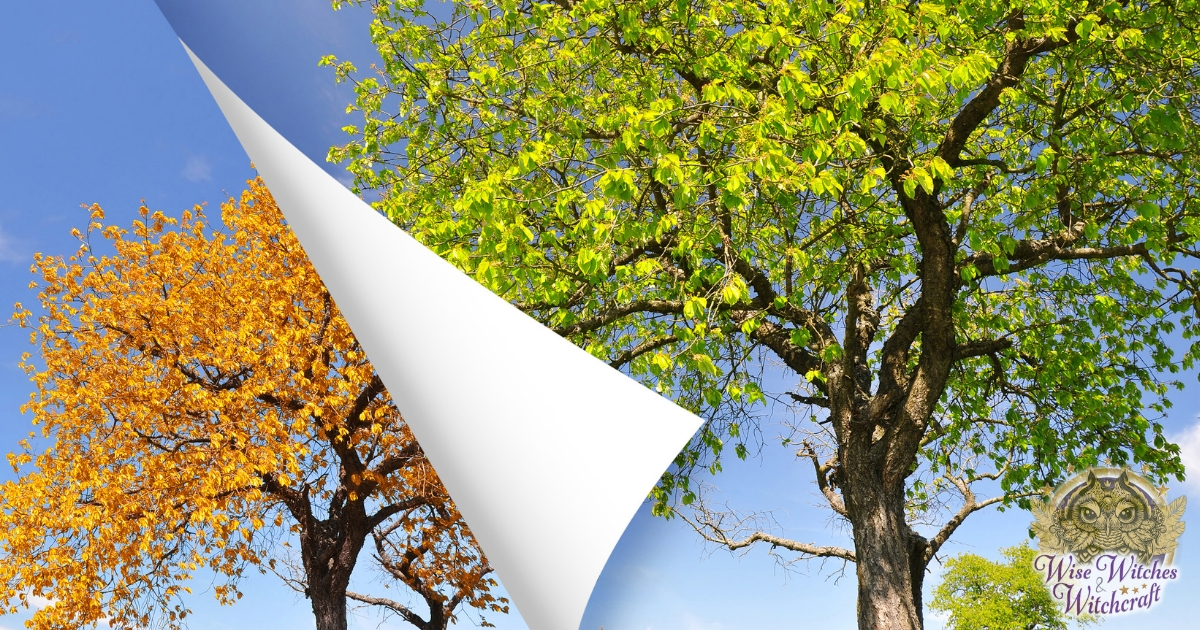 The Samhain holiday was the “marker” or “time milestone” indicating the conclusion of the summer season. Samhain marks the time when the daylight hours shorten, and night becomes longer. Samhain marks the midpoint between Autumnal Equinox and Winter Solstice. The people residing in the Isle of Man, Scotland, and Ireland celebrated the holiday. There’s some historical evidence the holiday was something people honored all the way back to Neolithic times. Some landmarks align with the sunrise and sunset on Samhain.

Samhain is the final harvest for the year. It is the Festival of the Dead and the New Year for some Pagans. The holiday’s pronunciation is “SOW-en” or SAH-when.” The holiday, being a fire festival is a two-day celebration. It runs from sunset on Oct 31 until sunset November 1st.

The ancient Celts not only acknowledge the changes of light and dark during the year. The time of year was important because of agriculture and farming responsibilities. The Celts understood when it was light it was the time to prepare for the when the dark half of the year rules. Harvesting foods and preparing for winter was imperative for surviving the brutal winter. 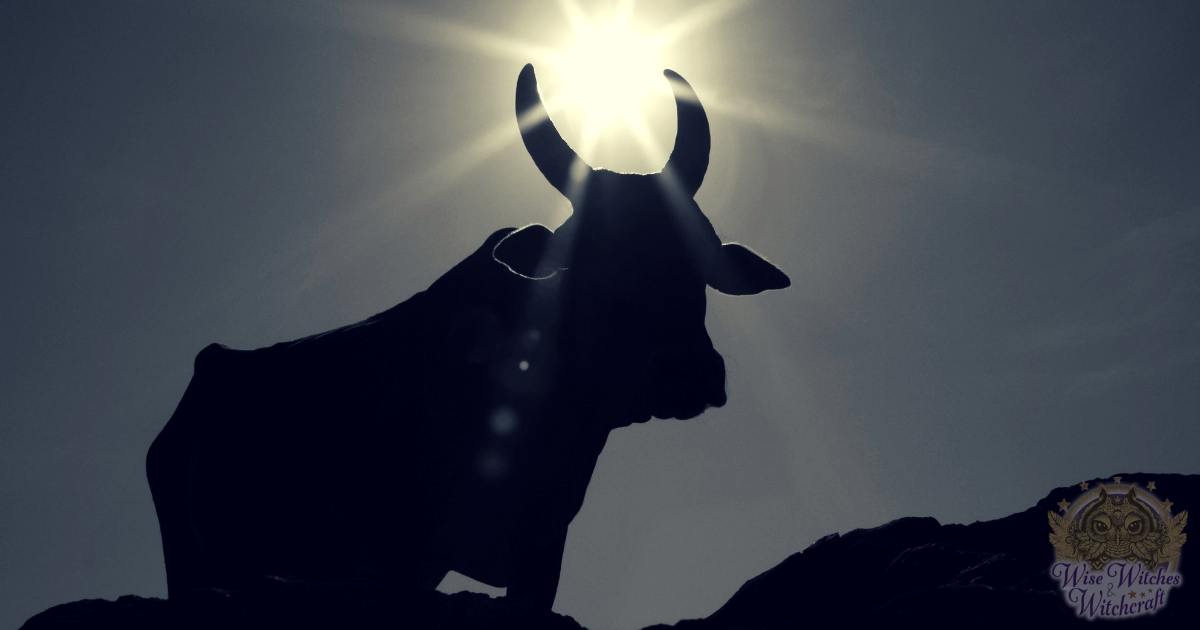 For the Celts, there were two high fire festivals. The ancients saw Samhain and Beltane as the major Sabbats and Imbolc and Lammas as the minor Sabbats. The two high Sabbats have traditions surrounding the care of cattle. During the summer, Celts brought the cows to the hills where they had summer-time pastures. When the dark half of the year begins at Samhain, they brought the cows back home. It is here in enclosures the cows remain for the duration of the winter if the Celts did not slaughter them for food.

The Celts had ritualized the practice of bringing the cows out to pasture and home again. When Beltane time arrives, the cows receive a blessing through ritual practices. They would have the cows pass through two fires. But, why did they do this ritual?

The cows are an animal the Celts consider as lunar creatures. Cows offer nourishment through milk, cheese, and butter. The nourishment the animal gives aligns it with the Mother Goddess and water element.
The Celts also saw the elements of water and fire as magical. They held the belief the two elements were what created the entire world. By passing the cows through two sacred fires, the Celts believe magick is afoot. It is the act of bringing fire and water together. Doing so was to work magick for change, creation, and transformation. 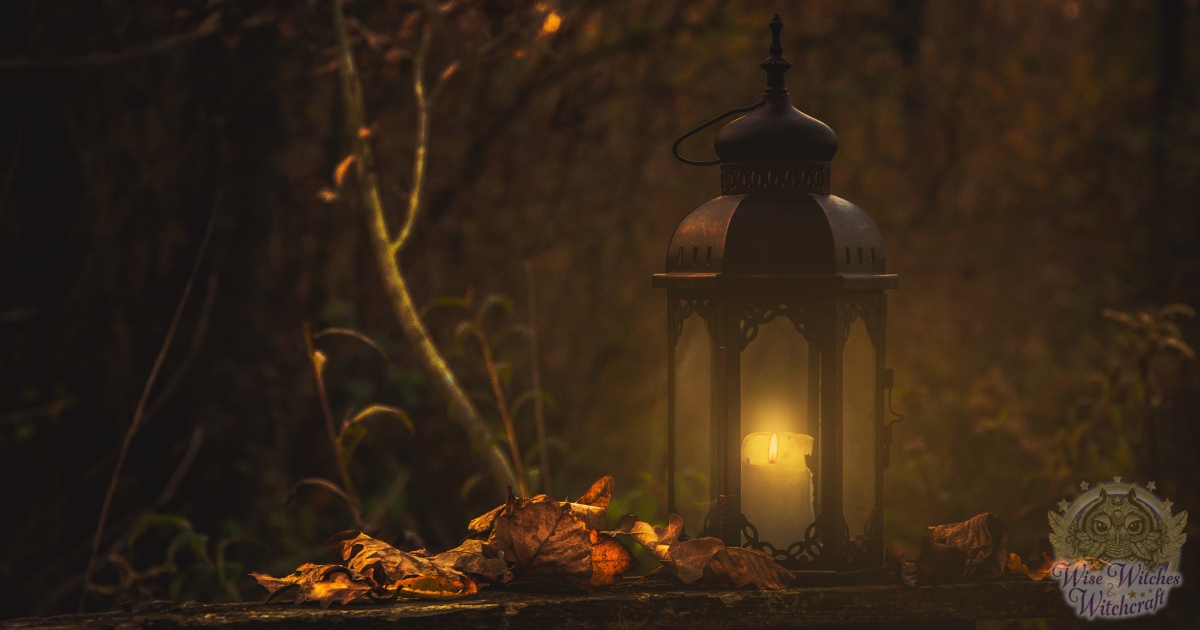 In ancient times Halloween is known as Samhain. Other names for the holiday include Sauin, Samhainn, and Samhuinn. There is a connection between modern-day Halloween and Samhain. The event is one the Celts consider a sacred day as it marks the division of the year. The Celts had several traditions NeoPagans include in their Sabbat celebrations too. They would honor the day with ritual practices, feasting, divination, and guising.

Ancient myth tells us that Samhain is a time when Spirits roam the world free. They can cross over from one plane of existence to the other because the veil thins or lifts. The Celts believed that both fairies and spirits can crossover from the other side. These spirits are the Aos Sí. It was an appropriate time to satisfy the Aos Sí and pagan deities. It was necessary to ensure the health of the livestock during the cold winter season. It was a normal practice to leave out offerings for the spirits.

Pagans would place beverages and food outside to satisfy the Aos Sí. NeoPagans celebrating Samhain have revived many of the old practices. There was a ritual to honor patron deities and to acknowledge the change of the seasons. Then there is often a feast. Once the circle closes, remaining libations is for spirits. An invitation to spirits is open this night. A practice called “The Dumb Supper” has practitioners putting out a dinner plate. For who is this place setting, you ask? For the deceased. During the celebratory meal, the practitioner will include some quiet time. The stillness is necessary in hopes of hearing the ancestor’s voice.

Modern Day Translation for Honoring the Ancestors Today, some pagans have ritual and feasts: here, the practice of putting out a place setting for spirit ancestors is still in practice. Others might stage a special altar dedicated to ancestors and those who have passed on. On top of the altar, images of ancestors, and perhaps small tokens or items once belonging to the ancestors can be placed.

During Samhain, the mini-altar can be decorated with appropriate seasonal colors, flowers, fruits, and vegetables from the harvest, nuts, stones, crystals, and the like. Candles are lit to light the way for ancestors. The idea is to invite the spirit of ancestors to join in the festivities of the evening and to spend time remembering those who have gone before us. It’s a time when we can thank our ancestors for all they’ve done while they were alive, and all they continue to do in the way of offering protection and guidance from the other side.

Since Samhain is the time of the thinning of the veil, it is one where modern pagans practice divination. Some feel the thinner veil makes it easier to get results from divinatory methods at this time. Other practices include spell casting and meditation, with the idea of using the powerful energies of the time to empower one’s magickal workings.

As a part of ancient festivals, the Celts engaged in a practice called “mumming and guising.” It is from this practice that modern-day trick-or-treating originates. The practice involves people putting on costumes. Once in disguise, they go about reciting verses as they go from one home to another. In return, they receive food. The idea was to wear a costume to confuse the Spirits roaming free. Games and divination were also common during this Samhain celebration. Neopagans also play games. It is also a time to conduct divination sessions with an array of divinatory tools. Such tools include the Tarot, pendulum, and scrying are among the most popular.

The Celts celebrated Samhain with bonfires serving as imitations of the Sun. As mentioned before, they saw the two forces of water and fire as magickal. Bonfires were lit to perform sympathetic magick. Ancient cultures belief it intensifies the power to fend off the darkness. The magick empowers the Sun and helps grow excellent crops. The fire is a purifying element seen as burning away all negativity in a person’s life. Fire scrying was not unusual on this holiday. Many NeoPagans have or enjoy a bonfire on Samhain. If not, candles are something to enjoy while invoking the power of the fire element on a smaller scale.

If we base our division of the year on the way the ancient Celts did, then Samhain is not only the end of summer but the beginning of the New Year. Modern Pagans and Witches consider Samhain a lot like January 1, of the Gregorian Calendar. It’s, therefore, an evening for contemplating all we’ve accomplished, and what we want for the year ahead. As we ready ourselves for the colder season, we also consider the “seeds” we want to plant when the appropriate time comes to do so.

Samhain versus Halloween: Is There a Difference? 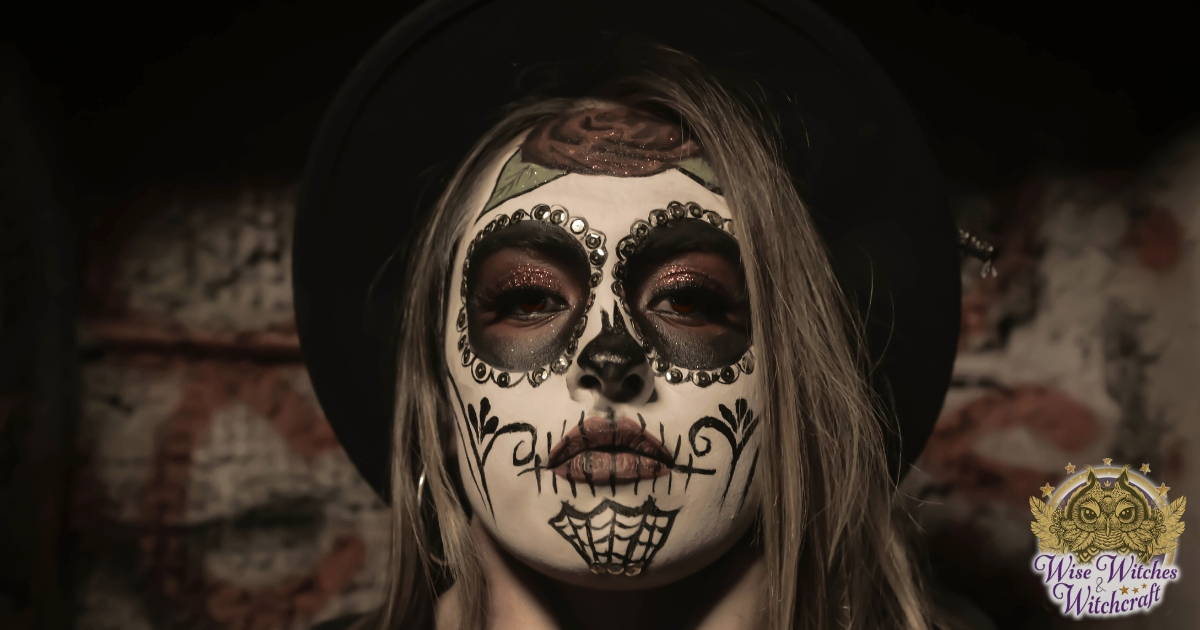 Over the course of time, many of the practices stemming from Samhain rituals and traditions have melded into Halloween customs. But, make no mistake about it, there is a HUGE difference between Samhain and Halloween. The distinction is identified in the “meaningfulness” of the day.

Yes, Samhain is fun with ritual, feasts, and the present-day witches’ balls are a blast! Yes, Halloween is fun too, with trick or treating, costume parties, haunted hayrides, and the works. There’s plenty of fans of Halloween; that’s why it is widely celebrated, highly commercialized, and why there are so many fans of Jack Skellington from Tim Burton’s famed “Nightmare Before Christmas!” And, let us not forget the magic of a little peanut butter and chocolate: whoever came up with that idea definitely had some knowledge of the magical arts (wink)!

Ultimately, the big difference between Samhain and Halloween is the significance of the day. Halloween is a fantastic celebration, but Samhain is a day where Pagan’s celebrate things both religious and sacred: It is one where Pagans honor the dead, celebrate the living, and look with joy to the year ahead!